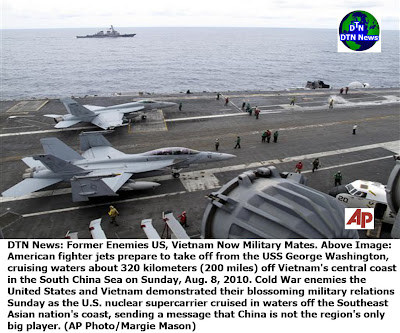 the region's only big player.
The visit comes 35 years after the Vietnam War as Washington and Hanoi are cozying up in a number of areas, from negotiating a controversial deal to share civilian nuclear fuel and technology to agreeing that China needs to work with its neighbors to resolve territorial claims in the South China Sea.
The USS George Washington's stop is officially billed as a commemoration of last month's 15th anniversary of normalized diplomatic relations between the former foes. But the timing also reflects Washington's heightened interest in maintaining security and stability in the Asia-Pacific amid tensions following the sinking of a South Korean warship in March, which killed 46 sailors. North Korea has been blamed for the attack, but has vehemently denied any involvement.
Last month during an Asian security meeting in Vietnam's capital, Hanoi, U.S. Secretary of State Hillary Rodham Clinton also angered China by unexpectedly calling on the Communist powerhouse to resolve territorial claims with neighboring Southeast Asian countries over islands in the South China Sea.
"The strategic implications and importance of the waters of the South China Sea and the freedom of navigation is vital to both Vietnam and the United States," Capt. Ross Myers, commander of the George Washington's air wing, said aboard the ship Sunday as fighter jets thundered off the flight deck above.
"I'm certain that the Chinese government and the Chinese people are trying to protect their interests," he added when asked about China's increased aggressiveness within the area. "It is more important for Vietnam (and) its partners to establish that they have an equal right to economic prosperity and peace within the region as well."
Chinese navy ships were seen shadowing the USS George Washington at a distance over the past several days as the supercarrier made its way throught the South China Sea along Vietnam's eastern coast, U.S. Navy officials said Sunday.
China claims the entire sea and the disputed Spratly and Paracel islands over which it exercises complete sovereignty. But Vietnam, Taiwan, Malaysia, Brunei and the Philippines also have staked claims on all or some of the territory, which straddles vital shipping lanes, important fishing grounds and is believed rich in oil and natural gas reserves. Clinton announced that the U.S. has a national interest in seeing the claims resolved.
"The problem is that China has now committed herself, publicly, to sovereignty of the South China Sea and to push that back, if only to the status of a claim that is not enforced, is going to be very difficult," said Arthur Waldron, an international relations specialist at the University of Pennsylvania. "So we are playing catch up, reminding the Chinese that we have not collapsed into post-great powerdom yet, and that we have other friends in the region."
Vietnam has long been vocal about the issue, protesting China's plans to bring tourists to the islands and most recently seismic studies conducted near the Paracels. Last month China also held naval drills in the South China Sea.
"Vietnam does not support containing China, but like most other ASEAN members would like to see each major power offset the other," Carl Thayer, a Vietnam expert at the Australian Defense Force Academy in Canberra, said, referring to the Association of Southeast Asian Nations. "Quite simply, these are not too subtle signals that Vietnam wants the United States to stay engaged in the region to balance China."
The formidable USS George Washington is a permanent presence in the Pacific, based in Japan. As one of the world's biggest warships, it is a floating city that can carry up to 70 aircraft, more than 5,000 sailors and aviators and about 4 million pounds (1.8 million kilograms) of bombs. It lurked Sunday about 200 miles (320 kilometers) off the central coast of Danang, Vietnam's jumping-off point for the disputed islands.
A group of high-ranking Vietnamese military officials was flown onto the carrier Sunday along with other Vietnamese government officials and the U.S. ambassador to the country.
The supercarrier came to Vietnam following four days of high-profile military exercises last month with South Korea aimed at showing solidarity following the sinking of the 1,200-ton Cheonan navy ship. The drills enraged Pyongyang and drew repeated criticism from its Chinese ally.
A Chinese newspaper ran a front-page story last week strongly hinting that China also is not happy about reports that Vietnam and the U.S. are negotiating a civilian nuclear fuel and technology deal that could allow Vietnam to enrich uranium on its own soil.
U.S. State Department spokesman P.J. Crowley said China had not been consulted about the talks, but he would not discuss the specifics of the enrichment provision. Congressional aides have said the agreement will likely not contain a no-enrichment pledge, which the U.S. promotes as the "gold standard" for civilian nuclear cooperation accords to ensure materials are not being used to build a nuclear weapon.
Vietnam has denied having any plans to enrich uranium on its own soil.
The aircraft carrier's visit is particularly symbolic as it cruises off the coast of central Danang, once the site of a bustling U.S. military base during the Vietnam War, which ended April 30, 1975, when northern communist forces seized control of the U.S.-backed capital of South Vietnam, reuniting the country.
Some 58,000 Americans and an estimated 3 million Vietnamese were killed during the war.
Relations have thrived since the former foes shook hands in 1995. The U.S. is Vietnam's top export market and Americans are the country's No. 1 foreign investor. Two-way trade reached $15.4 billion in 2009.
Military ties have also grown since the first U.S. warship ship visited Ho Chi Minh City in 2003, including high-level defense talks and training.
The USS John McCain destroyer will pay a port call to Vietnam later this week. The two navies are expected to have cultural exchanges along with training exercises, such as search and rescue operations.
Posted by DEFENSE NEWS at 8:50:00 PM