UPDATE 1-Flying laser zaps missile in first for US 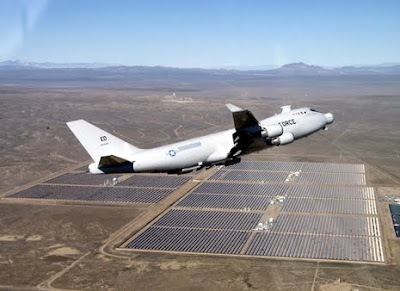 Defense News ~ WASHINGTON, Feb 12 (Reuters) - A high-powered laser aboard a modified Boeing Co (BA.N) 747 jumbo jet shot down an in-flight ballistic missile for the first time, highlighting a new class of ray guns best known from science fiction.
The flying laser's long-awaited test on Thursday showcased a potential to zap multiple targets at the speed of light and at a range of hundreds of kilometers, the Pentagon's Missile Defense Agency said in a statement.
"The Missile Defense Agency demonstrated the potential use of directed energy to defend against ballistic missiles when the Airborne Laser Testbed (ALTB) successfully destroyed a boosting ballistic missile," the agency said.
"The revolutionary use of directed energy is very attractive for missile defense," the statement added.
It cited among other things a low cost per intercept compared with other technologies used to defeat missiles that could be tipped with chemical, biological or nuclear warheads.
Directed energy weapons use highly focused rays to attack a target rather than chemical-powered arms. Those in control can tweak the strength involved, unlike a bullet or a bomb, allowing for less-than-lethal uses.
Lasers are well known from science fiction as a type of ray gun. In the real world, they are used for sighting, ranging and targeting for guns.
The experiment marked both the first time a laser weapon has destroyed a ballistic missile and the first time any system has accomplished it in the missile's boost phase of flight.
A boosting missile is easiest to track because its exhaust is bright and hot, but the window lasts only from one to five minutes, meaning the interceptor must be in close proximity.
The modified 747-400F jumbo jet took off from Edwards Air Force Base in California in an experiment that was unannounced before the outcome was made known early Friday.
A short-range ballistic missile was launched from an at-sea mobile launch platform off Point Mugu on the central California coast, the agency said.
Within seconds, the Airborne Laser used on board sensors to detect the missile, then a low-energy laser to track it.
After firing another laser to measure and compensate for atmospheric disturbance, on went its megawatt-class high-energy laser, "heating the boosting ballistic missile to critical structural failure," the agency said.
The engagement took place within two minutes of the target missile's launch while its rocket motors were still thrusting, the agency said.
Boeing, the prime contractor and system integrator, said: "With this successful experiment, the Airborne Laser Testbed has blazed a path for a new generation of high-energy, ultra-precision weaponry."
Michael Rinn, Boeing's program director, said in a statement: "ALTB technology and future directed-energy platforms will transform how the United States defends itself and its friends and allies."
The successful test prompted calls for the Pentagon to restore funding for further development of the Airborne Laser, which President Barack Obama turned into a kind of science experiment last year rather than a development program headed for deployment.
"This defense project should be made ready to protect our homeland at a moment's notice," said Rep. Todd Tiahrt, a Republican from Kansas, where Boeing had been expected to do modification work on the Airborne laser.
Riki Ellison of the Missile Defense Advocacy Alliance, a nonprofit funded partly by defense contractors, said the United States had spent about $5 billion on the Airborne Laser's development since the early 1990s.
"Why would the US Congress and the Department of Defense not fully fund and further develop this system to have it ready to deploy to give our armed forces and allies protection against Iran and North Korea," he said in an email interview.
John Pike, director of GlobbalSecurity.org, a military information website, said the test had not proven anything to him about the system's real-world value.
"The question is whether it can shoot down targets at long range and this test didn't answer the question," he said.
Northrop Grumman Corp (NOC.N) designed and built the higher-energy laser and Lockheed Martin Corp (LMT.N) supplied the beam- and fire-control systems.
(Reporting by Jim Wolf; editing by Andre Grenon)
Posted by DEFENSE NEWS at 8:33:00 AM 1 comment: