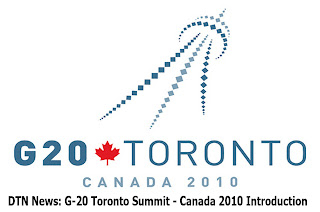 G-20 Toronto Summit is the fourth meeting of the G-20 heads of government in discussion of financial markets and the world economy, which will take place at the Metro Toronto Convention Centre in Toronto, Ontario, Canada. Set to take place during June 26—27, 2010, the summit was initially proposed to take place in the town of Huntsville, which was also chosen as the host of the concurrent 36th G8 summit, by Canadian Prime Minister Stephen Harper. The town was later deemed insufficient to provide hospitality for the large number of G-20 delegates and journalists, thus the G-20 summit was later finalized to take place in Toronto.
In his welcome speech at the G-20 sherpas' meeting, Harper announced the theme of the Toronto summit would be Recovery and New Beginnings, referring to an economic stimulus from the impact of the ongoing world recession. The Toronto summit's agenda calls for evaluating the progress of the financial sector reform, further developing sustainable stimulus measures, discussion of global bank tax, and promoting open markets. 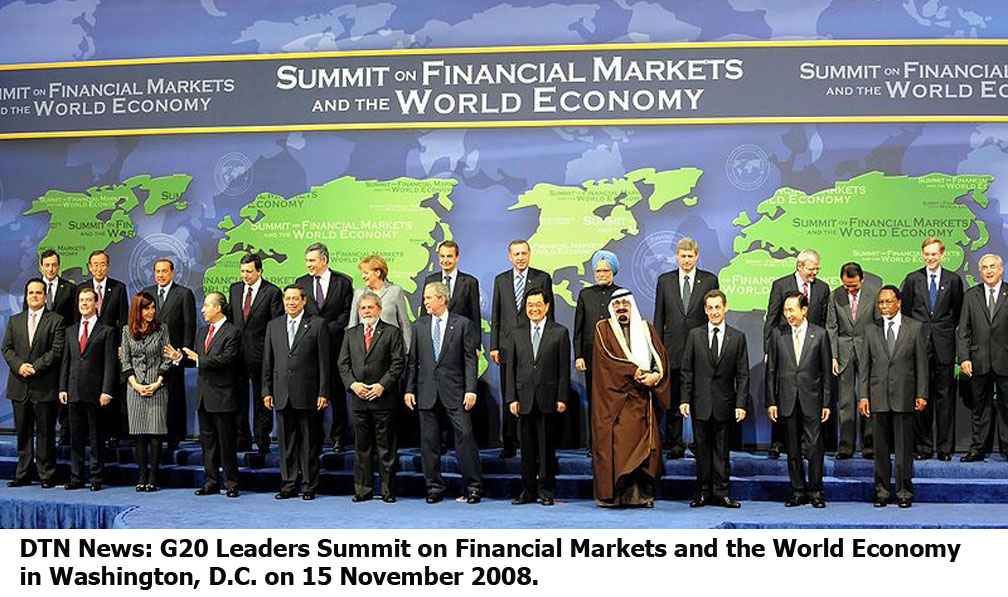 Since April 2010, an Integrated Security Unit, consisting of police officers from different regional departments, have been working on security in the Downtown core, where the summit will take place. Police officials have chosen locations to detain protestors and map traffic detours which would be in place during the two day summit. Several local events which were set to take place during the time of the summit, especially the Blue Jays' three-game series against Philadelphia, have been affected due to their proximity to the summit location. Total security cost for both summits was estimated to be over $1 billion, making it the largest and most expensive security operation in Canadian history.
Security
Security officials began 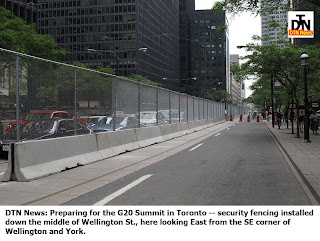 preparing for summit security as early as April 2010. Policing and patrolling will be provided by the Toronto Police Service, the Ontario Provincial Police (OPP), the Royal Canadian Mounted Police (RCMP) and Canadian Forces. The Peel Regional Police will aid in policing at Toronto Pearson International Airport in Mississauga during the arrivals of world leaders. The five departments formed an Integrated Security Unit (ISU), similar to the ISU created during the 2010 Winter Olympics in Vancouver.
According to the Globe and Mail, 10,000 uniformed police officers, 1,000 security guards, and several Canadian military forces will be deployed during the summit. The North American Aerospace Defense Command (NORAD) conducted Amalgam Virgo exercises on May 6-7 across the Greater Toronto Area using CF-18 Hornet jets, CH-124 Sea Kings and CH-146 Griffon helicopters at low altitudes. The total cost for security at both the G8 and the G-20 summits was determined to be $1.1 billion. The entire cost will be handled by the federal government, excluding local business damages.
The security perimeter begins with the outer boundary, specifically bordered by King Street to the north, Lake Shore Boulevard to the south, Yonge Street to the east, and Spadina Avenue to the west, which will be restricted to security officials and G-20 delegates only. Residents who live within the security zone were issued registration cards prior to the summit. Other pedestrians who wish to enter the security zone are required to present two pieces of photo identification and provide reasoning for entry. The surrounding area of the Metro Toronto Convention Centre, itself, will be fenced and off-limits to civilians and protestors. Erecting the $5.5 million 3 metre-high unscalable fence began June 7. Toronto Police installed 77 additional closed-circuit television security cameras in the area and purchased four Long Range Acoustic Devices which would be in use exclusively during the summit.

Participants of the Toronto summit were announced by Stephen Harper on May 8, 2010. Harper extended invitations to the leaders ofEthiopia and Malawi to further represent the continent of Africa, along with South Africa, already a G-20 member. Netherlands, Spain,Vietnam, and later Nigeria were also invited. The Organisation for Economic Co-operation and Development and the International Labour Organization, as well as Ethiopia, Malawi, Nigeria, and Vietnam will make their first G-20 summit attendances in Toronto.

A film studio located on Eastern Avenue was designated as a temporary holding centre for any individuals that may be arrested during the time of the summit. Toronto Police announced that Trinity Bellwoods Park would be the site for protesters, but following major opposition from local communities, police relocated the protesting site to north of Queen's Park. Canada Post announced that it will be removing any post boxes in the security zone. Toronto Parking Authority removed some parking meters in the security zone. Small trees along sidewalks around the convention centre were removed to prevent them from being used as weapons by protestors. Bus shelters, benches, and public trash cans were also removed from sidewalks.
*This article is being posted from Toronto, Canada By DTN News ~ Defense-Technology News, contact: dtnnews@ymail.com
Posted by DEFENSE NEWS at 9:54:00 PM No comments: