The Missile Defense Agency is announcing the award of a sole-source cost-plus-award-fee modification to Raytheon Missile Systems Co., Tucson, Ariz.,under the HQ0006-10-C-0005 contract, P00017. The total value of this award is $48,014,215, increasing the total contract value from $286,518,085 to $334,532,300. Under this modification, the contractor will continue to perform engineering services and material for systems engineering, design and development support, and initial hardware fabrication for the Standard Missile-3 Block IIA missile including continued divert and attitude control system development work. The work will be performed in Tucson, Ariz. The performance period is through Oct. 31, 2011. Fiscal 2011 research, development, test and evaluation funds will be used to incrementally fund this effort. Contract funds will not expire at the end of the current fiscal year. This is not a Foreign Military Sales acquisition. The Missile Defense Agency, Dahlgren, Va., is the contracting activity.

CYE Enterprises, Inc., Jacksonville, Fla., is being awarded a $25,000,000 firm-fixed-price contract to furnish all plants, materials, labor, equipment, and all operations in connection with repairing and replacing roofs, Eglin Air Force Base, Fla., per the statement of work and roofing specifications. AAC/PKOA, Eglin Air Force Base, Fla., is the contracting activity (FA2823-11-D-0012).

Battelle Memorial Institute, Columbus, Ohio, is being awarded a $14,738,940 cost-plus-fixed-fee, indefinite-delivery requirements contract to provide technical evaluations and technical assessments of the utility and or efficacy of hazard mitigation equipment. ESG/PKS, Offutt Air Force Base, Neb., is the contracting activity (SP0700-00-D-3180, delivery order 0716).

The Boeing Co., Seattle, Wash., is being awarded a $166,808,999 modification to a previously awarded fixed-price-incentive contract (N00019-09-C-0022) to provide funding for long lead materials in support of the low rate initial production, Lot 3, of 11 P-8A multi-mission maritime aircraft. Work will be performed in Seattle, Wash. (63.80 percent); Greenlawn, N.Y. (11.69 percent); Baltimore, Md. (10.98 percent); North Amityville, N.Y. (8.24 percent) and McKinney, Texas (5.29 percent). Work is expected to be completed in May 2015. Contract funds will not expire at the end of the current fiscal year. The Naval Air System Command, Patuxent River, Md., is the contracting activity.

BAE Systems Information Solutions, Inc., Herndon, Va. (N65236-11-D-3850); Booz Allen Hamilton, Inc., McLean, Va. (N65236-11-D-3851); Computer Sciences Corp., Falls Church, Va. (N65236-11-D-3852); Honeywell Technology Solutions, Inc., Columbia, Md. (N65236-11-D-3853); Science Applications International Corp., McLean, Va. (N65236-11-D-3854); and Scientific Research Corp., Atlanta, Ga. (N65236-11-D-3855), are each being awarded a $40,055,252 indefinite-delivery/indefinite-quantity, multiple-award, cost-plus-fixed-fee, performance-based contract to provide tactical and strategic and operations support services with the emphasis being on information assurance. These contracts will support the Navy and other Department of Defense and federal agencies. These contracts include options, which, if exercised, would bring the cumulative value of these contracts to an estimated $210,568,360. Work will be performed in Charleston, S.C. (90 percent), and Washington, D. C. (10 percent), and is expected to be completed by September 2012. If all options are exercised, work could continue until September 2016. Contract funds will not expire at the end of the current fiscal year. These multiple-award contracts were competitively procured via the Commerce Business Daily’s Federal Business Opportunities website, and the SPAWAR E-Commerce Central website, with 14 offers received. Space and Naval Warfare Systems Center Atlantic, Charleston, S.C., is the contracting activity.

FOPCO, Inc.*, Kapolei, Hawaii, is being awarded $8,070,800 for firm-fixed-price task order #0016 under a previously awarded multiple award construction contract (N62748-10-D-4019) for repair of Building 1492, Bachelor Enlisted Quarters, at Naval Station Pearl Harbor. Work will be performed in Pearl Harbor, Hawaii, and is expected to be completed by April 2013. Contract funds will expire at the end of the current fiscal year. Six proposals were received for this task order. The Naval Facilities Engineering Command, Hawaii, Joint Base Pearl Harbor Hickam-Hawaii, Pearl Harbor, Hawaii, is the contracting activity. 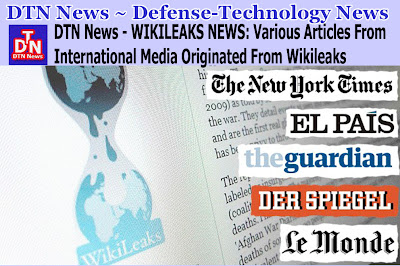 (NSI News Source Info) TORONTO, Canada - September 8, 2011: The international non-profit organization Wikileaks became world renown as a whistleblower publishing submissions of private, secret and classified media from anonymous news sources, news leaks and whistleblowers.
WikiLeaks states that its "primary interest is in exposing oppressive regimes in Asia, the former Soviet bloc, Sub-Saharan Africa and the Middle East, but we also expect to be of assistance to people of all regions who wish to reveal unethical behaviour in their governments and corporations".
Here are the news on various subjects on Wikileaks by global media/web/blogs and reactions respectively for DTN News readers and viewers;
*Link for This article compiled by Roger Smith from reliable sources
*Speaking Image - Creation of DTN News ~ Defense Technology News
*This article is being posted from Toronto, Canada By DTN News ~ Defense-Technology News
Contact:
dtnnews@ymail.com

Source: DTN News - - This article compiled by Roger Smith from reliable sources CBS
(NSI News Source Info) TORONTO, Canada - September 8, 2011: CBS News has learned that officials Thursday are very concerned about new information that there could be a terror strike on the 10th anniversary of 9/11, and this new potential plot could target New York or Washington, D.C. 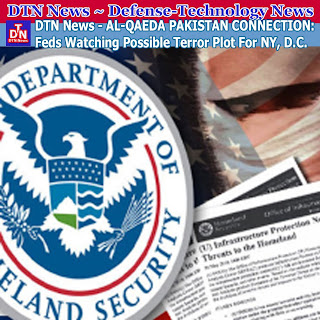 According to CBS News correspondent Bob Orr, this threat is "specific and credible but unconfirmed," meaning that intelligence agencies across the government has picked up a threat stream from overseas, and that there is a full court press by the FBI, CIA and others to refute or corroborate the information.
Sources told CBS News that the threat specifically has come from Pakistan, which is home to terror groups, including the Pakistani Taliban, the organization behind the failed Times Square bombing attempt.
A federal law enforcement source told CBS News that operatives are acting on Osama bin Laden's wishes to time an attack to the anniversary.
While the report is unconfirmed, a number of officials say that there are enough elements lined up to have them concerned about this threat stream more so than the others they have seen in recent days.
A Federal source told CBS News that FBI and intelligence authorities are currently tracking two distinct threat streams -- one involving a car bombing threat in New York or Washington and a separate threat against bridges and tunnels in New York. It is unknown if there is a correlation between the two threats.
A White House official told CBS News White House correspondent Mark Knoller that President Obama was briefed about the threat Thursday morning and had been updated all day. "The United States government has already significantly enhanced its security posture in advance of the 9/11 anniversary to protect the country against possible terrorist threats," said the official. "Nevertheless, the President directed the counterterrorism community to redouble its efforts in response to this credible but unconfirmed information."
White House officials said there were no plans to change Obama's travel schedule on Sunday in light of the threat. The president is scheduled to mark the 9/11 anniversary with stops at New York's ground zero, the Pentagon and Shanksville, Pa. He will also deliver remarks Sunday night at a memorial concert at the Kennedy Center in Washington.
"It's accurate that there is specific, credible but unconfirmed threat information," Homeland Security Department spokesman Matt Chandler said in a statement. "As we always do before important dates like the anniversary of 9/11, we will undoubtedly get more reporting in the coming days."
The U.S. has not raised its official terror threat level.
Earlier, Homeland Security Secretary Janet Napolitano said there was no information about a specific threat around the 10th anniversary of the Sept. 11 terrorist attacks but there is "a lot of chatter."
Napolitano told reporters Thursday that "in the intel world there is lots of chatter and we are taking it very seriously."
CBS News reports that the secretary said more federal air marshals would be deployed for the anniversary but wouldn't specify other measures being taken by Homeland Security and other agencies other than that they were "preparing accordingly."

Napolitano said Homeland Security would warn the public if a threat arose.

Asked about the threat of "lone wolves," Napolitano said it is a "key concern" that "more and more Americans in-country are being radicalized to the point of violence" and that Internet recruiting by those like U.S.-born cleric Anwar al-Awlaki is having an impact, CBS News reports.

Speaking generally and not in reference to the 9/11 anniversary, Napolitano said a 9/11-style plot would be "much more difficult" to execute now than 10 years ago because of the multiple security layers now in place, better intelligence gathering and better intelligence sharing, among other improvements, CBS News reports.

In New York, despite no specific terrorism threats against the city, thousands of extra police officers will be deployed, officials said Wednesday.

Police Commissioner Raymond Kelly, in remarks at a security conference in midtown Manhattan, cited evidence found in Osama bin Laden's compound after his death suggesting he hoped to strike on the anniversary.

"For that reason alone, we need to take precautions as if an actual plot is under way," Kelly said.

The New York Police Department plans to form a zone around the World Trade Center for a Sunday observance that President Obama and former President George W. Bush plan to attend. Along with extra officers -- the department won't reveal an exact number -- the security also will include hundreds of surveillance cameras trained on the site, Kelly said.

The World Trade Center gathering also will showcase a new police command of 212 officers dedicated to protecting the site. The officers have received special counterterrorism training, including on how to spot people conducting reconnaissance and how to respond to suicide or truck bombers.

The command conducted drills this week on evacuating the National September 11 Memorial & Museum and its adjacent plaza, which opens Monday.

Sunday's observance is one of more than 30 commemorative events scheduled for the week that the department is laboring to protect, Kelly said.

"We don't presume that ground zero alone is a potential target," the commissioner said. "That would be shortsighted."

The department also will deploy so-called quick-strike reaction forces to respond to potential threats outside lower Manhattan, Kelly said. The teams include officers in heavy armor, bomb squad technicians and hostage negotiators who will have highway patrol escorts on standby if needed.

New Yorkers will see more officers in the subways as well. Many will concentrate on busy transportation hubs such as Grand Central Terminal, Pennsylvania Station and the Herald Square subway station.

There are other security concerns: Extra patrols also will be deployed in Queens for Sunday's U.S. Open tennis finale. And the department is gearing up for next week's U.N. General Assembly, working with the Secret Service to protect 130 heads of state and coordinate 220 motorcades, Kelly said.

"In other words, we have a lot on our plate," he said. "But we have the talent and the resources to deal with it."