Source: DTN News - - K. V. Seth
(NSI News Source Info) HONG KONG- January 7, 2011: A wealthy Hong Kong businessman who operates a chain of Chinese restaurants in the U.K. has submitted a bid to purchase the decommissioned British aircraft carrier HMS Invincible, with plans to tow the vessel to China and convert it into an international school, according a report Friday in the English-language South China Morning Post. 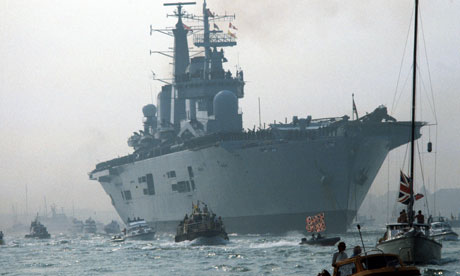 UK-based Chinese businessman, Lam Kin-bong, has bid £5m for the decommissioned aircraft carrier HMS Invincible, pictured returning to the UK in 1982. Photograph: Rex Features
Lam Kin-bong, 48, has bid 5 million pounds ($7.7 million) for the craft, which played a role in the British war against Argentina over the Falkland Islands in 1982, the report said. Lam said his plans for the 30-year-old vessel, which is being sold via online auction by Britain's Ministry of Defense, include berthing the stripped out hulk in Zhuhai where it will be converted into a school to promote cultural ties between China and the U.K., according to the report.
*This article is being posted from Toronto, Canada By DTN News ~ Defense-Technology News, contact: dtnnews@ymail.com 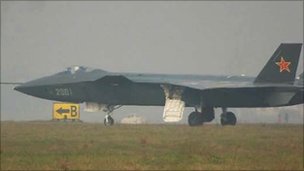 The US has the world's only operational stealth fighter, the Lockheed Martin F-22 Raptor, and has been playing down the images that appear to show a working prototype.

But they are yet another sign of the shifting balance brought about by the rise of the country's economic power.

Their emergence coincides with a Chinese general's call to double official military spending, against a background of wider cuts in military budgets in industrialised countries caused by the global financial crisis.

US Secretary of Defense Robert Gates - who is due to start his long-delayed visit to Beijing on Sunday - says the Pentagon wants to make further cuts of nearly $80bn (£51bn) over the next five years.

The US and its allies have played down any possibility of the early deployment by China of such an advanced aircraft.

But they have sounded the alarm about the expansion of Beijing's military capabilities, especially its Air Force, Navy and the Second Artillery Corps that controls China's ballistic missiles and nuclear arsenal.

Beijing insists its military modernisation poses a threat to no one. 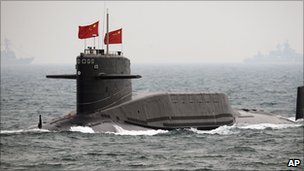 China has increased military funding as its economy has grown

The older generation of China's military used to take pride in having seized power from the ruling Kuomingtang Party in 1949 with "millet and rifles".

But three modern wars in other parts of the world have hardened the resolve of China's top brass to catch up militarily.

The conflict between the UK and Argentina nearly 30 years ago pushed the late leader Deng Xiaoping to slash one million army personnel so as to use the then limited military budget on improving hardware.

The two Gulf Wars further demonstrated the technological superiority of the US and its allies, and spurred Chinese leaders on a new drive to "informatise" the military by integrating new technology into equipment and operations.

China's official military budget quadrupled between 1999 and 2009 as the country's economy grew.

To be sure, the US defence budget is still the biggest in the world at around $700bn, but China's is the second largest and the rate of increase may well go up this year.

In an article published in a Chinese Communist Party publication this week, General Jiang Luming, head of the military economics unit at China's National Defence University, called for "maximising national interest" by doubling China's military funding to 2.8% of GDP, which he said was the average of 132 countries since the end of the Cold War.

He said this was needed to meet "special security requirements" - an apparent reference to preparing for eventual reunification with Taiwan, safeguarding key interests overseas and offshore, and China being a socialist country without any military allies.

This last issue is compounded by the arms embargo imposed by the European Union following the military crackdown in Tiananmen Square in 1989. The Chinese government has been lobbying to get the sanctions lifted without success.

On various occasions, Chinese officials have said the 21-year-old EU arms embargo forces China to invest more in its own military research and development.

Perhaps Russia is the only country China could turn to for advanced military and space technology. But China seems to be learning very fast.

Some analysts believe the pupil is overtaking the teacher in many areas.