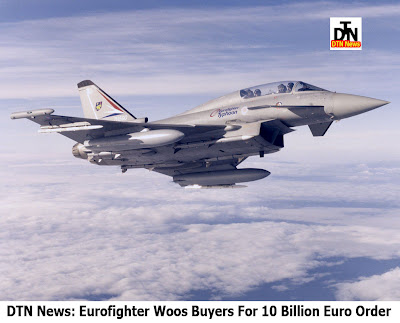 er the Eurofighter Typhoon by asking Britain, Germany, Italy and Spain to invest an estimated 10 billion euros ($13.42 billion) in the next wave of jet fighter production.
A spokesman for a consortium of BAE Systems (BAES.L), EADS (EAD.PA) and Finmeccanica (SIFI.MI) told Reuters it had submitted an offer at the end of May -- a move that analysts say could trigger a tug of war over dwindling defence budgets during a European sovereign debt crisis.
The spokesman declined to disclose the value of the offer, which covers 124 planes, but defence industry sources at the Berlin Air Show said it was around 10 billion euros.
Eurofighter says a decision on whether to build the planes would be needed within a year in order to avoid a production gap it believes would be damaging for exports and hit jobs.
The climate for talks is difficult, however, after Germany announced tough defence cuts and Britain promised to defer any major spending decisions until after a strategic defence review.
Britain, Germany, Italy and Spain have so far taken delivery of a combined 222 Eurofighter Typhoons out of the 620 they originally ordered.
The original order spanned three separate tranches. But the third and final production run of 236 planes had to be split up last year when buyers could only agree to purchase 112 aircraft.
Any decision to cancel the rest is likely to trigger calls for compensation as well as intensive lobbying over the fate of 100,000 jobs tied up directly or indirectly in the project.
Besides domestic contracts, Saudi Arabia has ordered 70 of the planes and 15 have been sold to Austria.
The Typhoon is competing in a number of contests against rival models such as the French Rafale (AVMD.PA), Swedish Gripen SAAB.ST or Boeing's F-18 (BA.N).
Switzerland has renewed interest in updating its fighter fleet after suspending a competition last year and could make a decision later in 2010, air show delegates said.
Other nearby countries showing interest in deals or evaluating their positions include Serbia, Romania and Turkey.
Middle East and Asian demand has been strong as countries face new threats or pressure to renew ageing fleets.
But Brazil, actively courted by France as the first foreign buyer for its Dassault-built Rafale, has so far delayed a decision and may have to postpone until after Oct. 3 elections.
"We are worried; nothing is happening at the moment," a French industrial source said of the competition, in which Eurofighter is not represented. ($1=.7453 Euro)
(Additional reporting by Matthias Blamont in Paris; editing by Simon Jessop)
Posted by DEFENSE NEWS at 9:24:00 AM No comments:

Source: DTN News / Reuters
(NSI News Source Info) BERLIN/HELSINKI, - June 10, 2010: Airbus (EAD.PA) announced two more orders at the Berlin Air Show on Thursday, bringing its tally for the week to 67 aircraft orders including a record deal with Emirates for 32 A380 superjumbos.
The biennial Berlin show does not usually see major orders, with airlines traditionally preferring to make announcements at larger air shows such as Farnborough in England and Le Bourget in France, which take place on alternate years in July. 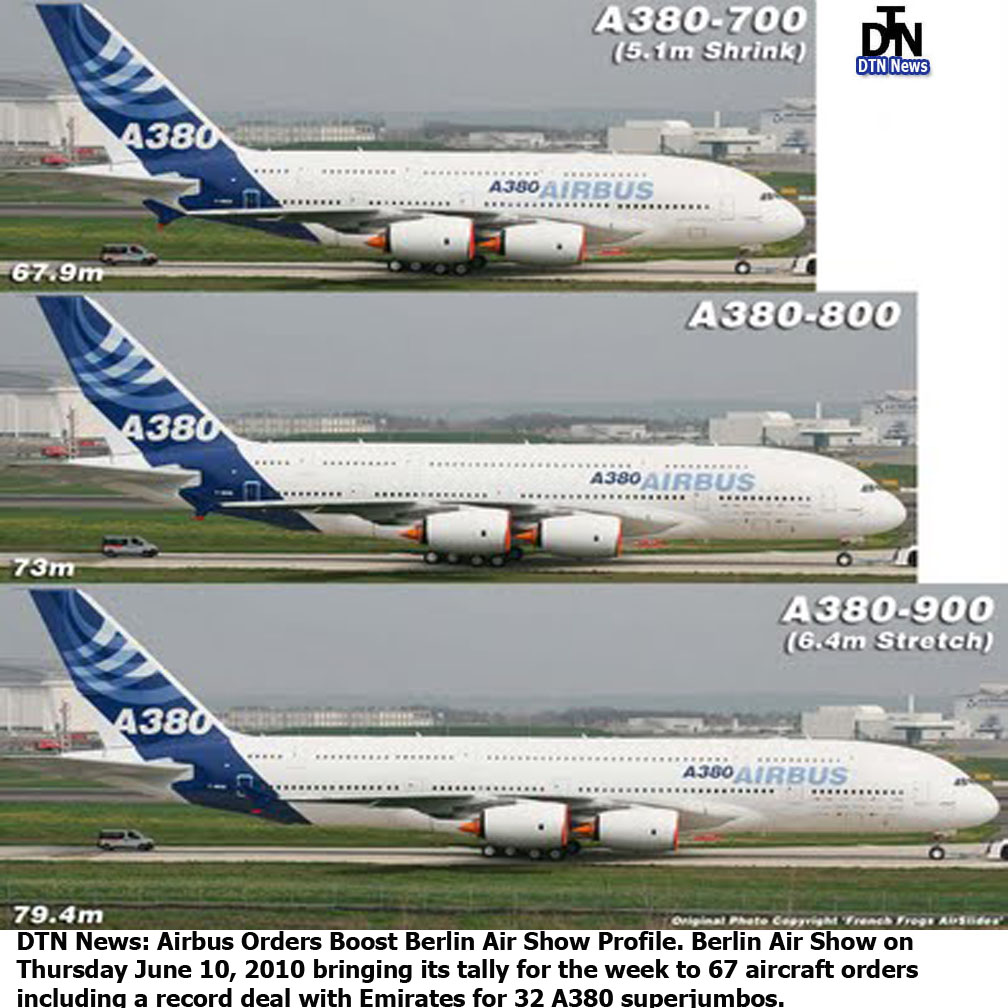 This year's show, just over a month before Farnborough, had opened with a splash on Tuesday as EADS' Airbus unit announced $14 billion in new orders, including the record $11 billion A380 order for the Arab world's largest airline.
"Of course I want that (the Berlin Air Show) gets a boost. I was very happy that we could sign the contract with Emirates here in Berlin, in the presence of (German Chancellor Angela) Merkel," Airbus Chief Executive Tom Enders told reporters on the sidelines of the event at the German capital's Schoenefeld airport on Thursday.
Before this year's show, the biggest order ever announced at the Berlin Air Show had been a 3.2 billion euro ($3.9 billion) order for 35 Airbus aircraft by Gulf Air [GULF.UL] in 2008.
Merkel had opened the show on Tuesday, just as she was coming under fire from airline executives gathered for the global airline industry body's annual meeting elsewhere in the city for a proposed air travel tax.
Announcing its final orders agreed at the Berlin Air Show, Airbus said on Thursday Finnish airline Finnair (FIA1S.HE) and Berlin-based Germania had agreed to buy five aircraft each.
Finnair signed a letter of intent to order five new A321ER aircraft worth more than 400 million euros that will replace Boeing 757s (BA.N) used for leisure flights.
The airline is the first to order A321s with "Sharklet" wing tip devices that Airbus said would cut the planes' fuel consumption by 4 percent. Fuel is one of an airline's biggest cost factors, alongside staffing.
Germania signed a memorandum of understanding to buy five Airbus A319s, with a total list price of $372 million.
Germania Chief Commercial Officer John Kohlsaat said in a news conference at the air show that the orders would become firm within a few days.
At its meeting earlier this week, the International Air Transport Association gave a surprise forecast for a 2010 profit of $2.5 billion for the airline industry, fanning hopes the global industry would recover more quickly than expected, boosting demand for air travel and airplanes. ($1=.8307 Euro)
(Reporting by Terhi Kinnunen in Helsinki and Maria Sheahan in Berlin; Editing by Hans Peters and Simon Jessop)
Posted by DEFENSE NEWS at 8:56:00 AM No comments: