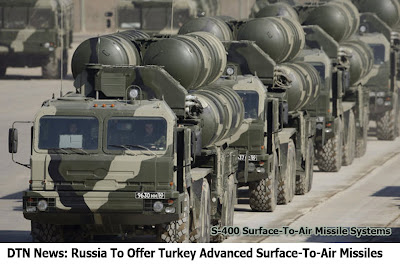 to participate in a tender to offer Turkey S-300 and S-400 surface-to-air missile systems, the state-controlled arms exporter said on Wednesday.
"The Turkish military has a great need for S-300 and S-400 long-range missile defense systems," Rosoboronexport CEO Anatoly Isaikin said. "Russia has expressed its readiness to participate in a tender for the delivery of such systems."
He said leading SAM manufacturers from Western countries would participate in the tender "on a par with Russia."
He gave no indication as to what specific SAM modifications would be offered or the timeframe for the tender.
Turkish military experts have said Ankara is interested in the Russian missiles, which could effectively protect the country's southern borders.
The advanced version of the S-300 missile system, called S-300PMU1, has a range of over 150 kilometers (over 100 miles) and can intercept ballistic missiles and aircraft at low and high altitudes, making it effective in warding off air strikes.
The S-300V/Antey 2500 (SA-12 Gladiator/Giant) consists of a new command vehicle, an array of advanced radars and up to six loader vehicles assigned to each launcher.
The S-400 (SA-21 Growler) is capable of simultaneously engaging six targets to a range of 400 km (250 miles) and an altitude up to 30 kilometers, including aircraft, cruise missiles, and ballistic missiles.
Posted by DEFENSE NEWS at 6:15:00 AM No comments: 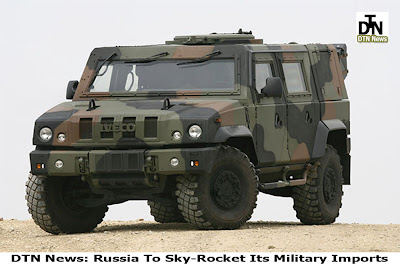 Source: DTN News / RT
(NSI News Source Info) MOSCOW, Russia - June 21, 2010: Russia may spend more than €10 billion on weapons from Europe and Israel over the next 5 years.
Experts at a Moscow-based research institute predict Russians will see two €1.5 billion deals within the next couple of years.
The first will be a purchase of 4 Mistral-class warships, which are primarily helicopter carriers, from France. Prime Minister Putin negotiated the possible terms during his recent visit to the country.
The second deal will be 3,000 light-armoured LMV vehicles from an Italian firm, Iveco. They are used in hot spots to protect infantry from gunfire and bombs.
Other contracts are thought to be in the pipeline for the next 5 or 6 years, including a purchase of Israel air-space industry models of unmanned aircraft and a deal with another French firm for thermal imaging equipment, which in total will cost €10 billion.
Traditionally, Russia has been an exporter than rather an importer of weapons: currently the country is the second largest exporter of weapons in the world, covering 23% of the market. As for imports of arms, between 2005 and 2009, Russia was ranked as 80th in the world.
The reason for such change in tactics is an absence of its own technologies that would enable Russia to build the Mistral-class warships or, for example, complex military electronics. It will take years to develop such technologies, so Russian authorities decided to purchase it and, at the same time, maintain the high level of exports.

“This is absolutely normal,” Puslan Pukhov from the Centre for Analysis of Strategies and Technologies told RT. “After the end of the Cold War, all the countries of the world are not only exporting the weapons, but also importing them – like the US. There is no single country which is capable of producing good equipment for itself. Sometimes other countries produce excellent equipment and it is much cheaper to buy it than to develop it.”
All this is part of a broader plan by President Medvedev to upgrade 30% of the country’s arms by 2015
Posted by DEFENSE NEWS at 6:08:00 AM No comments: 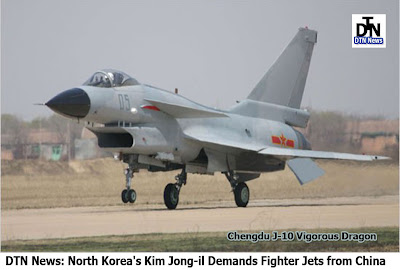 Source: DTN News By Roger Smith
(NSI News Source Info) TORONTO, Canada - June 21, 2010: North Korea asked China to provide it with the latest J-10 fighter jets and other hardware but was rejected, it emerged last week according to reliable sources from DTN News.
According to a high-ranking source in the North, North Korean leader Kim Jong-il made the request to Chinese President Hu Jintao when he visited China in early May. But Hu apparently told Kim that he China will protect and support him if attacked.
Observers guess this is the reason why Kim left a day earlier than scheduled.
One North Korean defector who used to be a high-ranking official said, "Kim is increasingly afraid of an attack by South Korean and U.S. forces" following the North's sinking of the South Korean Navy corvette in March. The North Korean leader therefore wanted to get his hands on the latest Chinese fighter jets to counter South Korea's F-15 and F-16 fighter planes.
"Kim wouldn't have visited China with such a large entourage if he merely wanted economic assistance," the defector said. Another North Korean defector and former soldier said Pyongyang may have bolstered its so-called asymmetric warfare capabilities by strengthening special forces "but still lags behind South Korea in terms of naval and air force capabilities and feels threatened."
There is speculation that North Korea is forced to lean on China because it does not have the money to buy expensive Sukhoi fighters from Russia.
*This article is being posted from Toronto, Canada By DTN News ~ Defense-Technology News, contact: dtnnews@ymail.com
Posted by DEFENSE NEWS at 6:03:00 AM No comments: 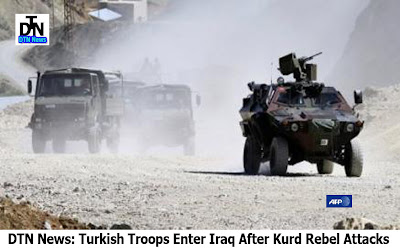 gainst hideouts of Kurdish rebels who killed 12 soldiers in the deadliest spell of violence in two years.
The ground incursion into Iraq came after Turkish Prime Minister Recep Tayyip Erdogan vowed to fight the Kurdistan Workers Party (PKK) "to the end" and PKK spokesman Ahmed Denis hit back with a threat to attack cities across Turkey if the army did not halt its policy of confrontation.
Iraqi Foreign Minister Hoshyar Zebari, himself a Kurd, criticised the "unilateral" Turkish action and called on Erdogan's government to return to peaceful efforts to woo Turkey's large Kurdish minority away from violence.
By morning, the troops had advanced 10 kilometres (six miles) into Iraqi territory in the Qandil mountains where the rebels maintain a network of rear bases in their 26-year-old armed campaign for self-rule in southeastern Turkey, the Iraqi Kurdish security official said.
Turkish troops were operating in the mountains north of the town of Sidikan in Arbil province, one of three that make up the Kurdish autonomous region of northern Iraq, the official said.
Turkish fire killed a 15-year-old girl and wounded her mother and two-year-old brother in Khwakurq village, Sidikan district commissioner Ahmed Qader told AFP.
As Turkish forces advanced into Iraqi territory during the night they killed another three people, a security official said, without specifying whether the dead were civilians or PKK fighters.
Inside Turkey, the rebels kept up their attacks, killing one soldier and wounding another, bringing the military's losses in the past two days to 12, Turkey's Anatolia news agency reported. The new casualties came as the Turkish premier joined other dignitaries in the eastern city of Van to honour the 11 soldiers who died on Saturday -- the bloodiest single day for the army since 2008.
"We are not going to slide into defeatism... we are going fight on to the end," Erdogan said at the televised ceremony.
The death toll prompted indignation among ordinary Turks, with many cultural and sporting events cancelled in mourning. Around 1,000 demonstrators gathered in Istanbul, chanting: "An eye for an eye."
On Monday morning, Turkish President Abdullah Gul is to chair a meeting of top political and military chiefs to discuss the upsurge in violence, Anatolia news agency reported.
Last year, Erdogan had announced a new policy of boosting Kurdish freedoms and investment in the country's impoverished southeast.
But it has faltered amid an opposition outcry that Ankara is bowing to the PKK, as well as persistent rebel attacks and a judicial onslaught on Kurdish activists.
The Iraqi foreign minister called for a return to the previous policy.
"This initiative is a wise one and needs to be embraced, enhanced and translated into action as the best solution for this age-old problem," Zebari told AFP in an interview.
"Of course we do not condone or support any cross-border terrorist attacks by the PKK," he stressed, adding that nonetheless "no country should resort to unilateral action."
Zebari said he feared Turkey was stepping up its incursions and air raids as the clock ticks down to an August 31 deadline for Washington to pull out 38,000 of its remaining 88,000 troops in Iraq.
"I personally believe the reason they are escalating these attacks now is to test the will of the Iraqi government, and also the American forces, as a prelude to the withdrawal of US combat forces in August," Zebari said.
"We are capable of filling the vacuum and we will not allow any other countries to step in to fill that vacuum."
Sunday's Turkish ground incursion was the second in five days and went far deeper than the previous incursion on Wednesday when troops advanced just a few kilometres (miles) before withdrawing.
The conflict with the PKK, blacklisted as a terrorist organisation by much of the international community, has killed more than 45,000 people since it broke out in 1984, according to the Turkish army.
Posted by DEFENSE NEWS at 6:00:00 AM No comments: