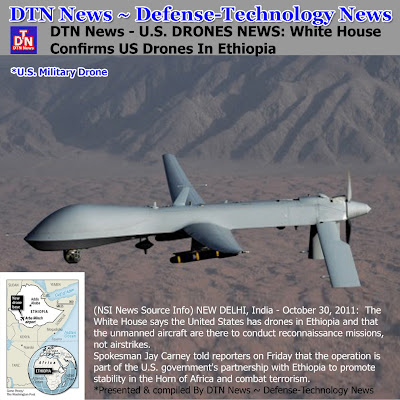 (NSI News Source Info) NEW DELHI, India - October 30, 2011: The White House says the United States has drones in Ethiopia and that the unmanned aircraft are there to conduct reconnaissance missions, not airstrikes.
Spokesman Jay Carney told reporters on Friday that the operation is part of the U.S. government's partnership with Ethiopia to promote stability in the Horn of Africa and combat terrorism.
U.S. military officials have confirmed the drones are flying into Somalia, where the government is battling the al-Qaida-Linked militant group al-Shabab.
The drones can be armed with missiles and satellite-guided bombs, but a military spokesman told VOA on Friday the missions are strictly for surveillance purposes.
Authorities say the remote-controlled aircraft are flying from an airfield in the southern Ethiopian city of Arba Minch.
The spokesman also said the drone operation is unrelated to Kenya's ongoing military offensive inside Somalia.
Kenyan troops moved into Somalia two weeks ago in pursuit of al-Shabab militants, who are suspected of kidnapping several foreigners on Kenyan territory.
On Friday, Kenyan and Somali forces captured the town of Burgabo in the Lower Juba region.
Kenyan troops have now moved within 200 kilometers of the port city of Kismayo, the third largest city in Somalia and an economic hub for al-Shabab.

Because UAVs are not burdened with the physiological limitations of human pilots, they can be designed for maximized on-station times. The maximum flight duration of unmanned, aerial vehicles varies widely. Internal-combustion-engine aircraft endurance depends strongly on the percentage of fuel burned as a fraction of total weight (the Breguet endurance equation), and so is largely independent of aircraft size. Solar-electric UAVs hold potential for unlimited flight, a concept originally championed by the AstroFlight Sunrise in 1974[61][62][63][64] and the much later Aerovironment Helios Prototype, which was destroyed in a 2003 crash.

One of the uses for a high endurance UAV would be to "stare" at the battlefield for a long period of time to produce a record of events that could then be played backwards to track where improvised explosive devices (IEDs) came from. Air Force Chief of Staff John P. Jumper started a program to create these persistent UAVs, but this was stopped once he was replaced.[67]

The Defense Advanced Research Projects Agency (DARPA) is to sign a contract on building an UAV which should have an enormous endurance capability of about 5 years. The project is entitled "Vulture" and a September 15, 2010 news release indicated DARPA’s Vulture Program Enters Phase II.[68] The developers are certain neither on the design of the UAV nor on what fuel it should run to be able to stay in air without any maintenance for such a long period of time.[69]

Source: DTN News - - This article compiled by Roger Smith from reliable sources TOI
(NSI News Source Info) NEW DELHI, India - October 30, 2011: India is going to soon ink yet another $1.2-billion deal with the US for six more C-130J " Super Hercules" military transport aircraft, even as the IAF gears up for intensive training on the first six of these aircraft for "special operations". 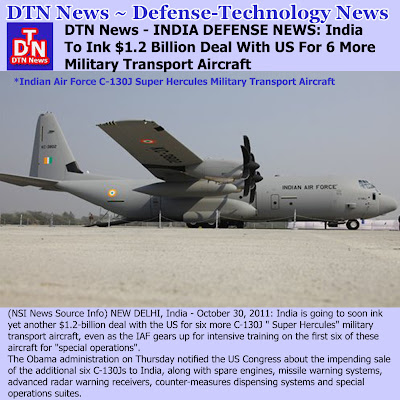 The Obama administration on Thursday notified the US Congress about the impending sale of the additional six C-130Js to India, along with spare engines, missile warning systems, advanced radar warning receivers, counter-measures dispensing systems and special operations suites.
*C-130J Hercules Tactical Transport Aircrafts
The Lockheed Martin C-130 is the US Air Force principal tactical cargo and personnel transport aircraft. The C-130J Hercules is the latest model, featuring a glass cockpit, digital avionics and a new propulsion system with a six-bladed propeller.
The C-130 has been in continuous production since 1954 and more than 2,300 Hercules have been built for 67 countries.
The improvements built into the C-130J, which entered production in 1997, have enhanced the performance of the aircraft in terms of its range, cruise ceiling time to climb, speed and airfield requirements.
A stretched version, the C-130J-30 has been developed and designated the CC-130J by the USAF. The first C-130J-30 for the UK RAF (the launch customer) was delivered in November 1999.
The C-130J entered active service with the USAF at Little Rock Air Force Base in April 2004 and was first deployed in December 2004.
The first combat airdrop for the USAF was in July 2005. The US Air Mobility Command declared initial operating capability for the C-130J in October 2006.
C-130J international orders
1186 C-130J and C-130J-30 aircraft have been ordered and more than 150 delivered. Orders are: US Air Force, Air National Guard, Marine Corps and Coastguard (89 C-130J and C-130J-30 and 20 KC-130J tankers), UK (10 C-130J, 15 C-130J-30 all delivered), Italian Air Force (12 C-130J and 10 C-130J-30 all delivered), Royal Australian Air Force (12 C-130J, all delivered), Kuwaiti Air Force (four C-130J-30) and the Danish Air Force (four C-130J-30 all delivered).
In April 2004, the US Marine Corps formally accepted the first KC-130J tanker / transport into service. The aircraft was first deployed in combat in April 2005 in Iraq. By the end of 2006, 24 aircraft had been delivered.
In December 2006, an additional order was placed for three C-130J-30 for the USAF and one KC-130J for the USMC. The KC-130J was delivered to the USMC in October 2010.
In May 2007, India requested the foreign military sale (FMS) of six C-130J aircraft. The $1.2bn FMS contract was placed in February 2008.
The first C-130J was delivered to the Indian Air Force (IAF) in December 2010 and entered into service in February 2011. The third and fourth C-130Js were delivered in June 2011. The fifth aircraft was delivered in September 2011. Deliveries are scheduled to conclude in October 2011 when the sixth C-130J will be handed over to the IAF.
In November 2007, Norway placed an order for the purchase of four C-130J Super Hercules aircraft under a $519m FMS agreement.
One aircraft was delivered in November 2008 and the second in April 2009. Deliveries concluded in May 2010 with the procurement of the fourth C-130J aircraft.
In January 2008, Canada placed a C$1.4bn order for 17 C-130J aircraft. The first delivery took place in June 2010 at the Canadian Forces Base Trenton. Deliveries are expected to be completed by April 2012.
In June 2008, the USAF ordered six HC/MC-130J special operations variants of the C-130J. The first MC-130J was delivered in March 2011.
In July 2008, the government of Israel ordered nine C-130J-30 aircraft. Under an undefinitized contract action (UCA) signed with the US Government in April 2011, Lockheed Martin will supply an additional C-130J to Israel.
Qatar ordered four C-130J-30 aircraft. The production of the first C-130J-30 aircraft was completed in May 2011 with deliveries scheduled to begin later in 2011. In August 2008, Iraq requested the sale of six C-130J-30 aircraft.
The Sultanate of Oman ordered one C-130J-30 long configuration aircraft in July 2009 for delivery in 2012. In August 2010, Oman ordered two additional C-130J aircraft. Deliveries are slated for 2013 and 2014.
Lockheed Martin signed a contract with Tunisia in March 2010 to supply two C-130J Super Hercules airlifters. These two aircraft are scheduled for delivery in 2013 and 2014.
The US Government awarded a $245m FMS contract to Lockheed Martin on 27 May 2010 for supplying three KC-130J refuelling aircraft to Kuwait Air Force. The contract was managed by the US Navy. Deliveries will begin in 2013 and are scheduled for completion in 2014.
The Republic of Korean Air Force (ROKAF) ordered four C-130J Super Hercules aircraft in December 2010. Deliveries will commence in 2014. Lockheed Martin will also provide aircrew and maintenance training for two years.
Lockheed Martin was awarded a $270m contract by the USAF in February 2011 to supply C-130 Aircrew Training Systems (ATS). The contract includes provision of training and instruction services, site management, engineering support and operation and maintenance for aircrew training devices.
In September 2011, CAE was awarded a contract by the US Air Force to design, build and supply four additional full flight simulators for C-130J transport aircraft.
*Link for This article compiled by Roger Smith from reliable sources TOI
*Speaking Image - Creation of DTN News ~ Defense Technology News
*This article is being posted from Toronto, Canada By DTN News ~ Defense-Technology News
Contact:
dtnnews@ymail.com