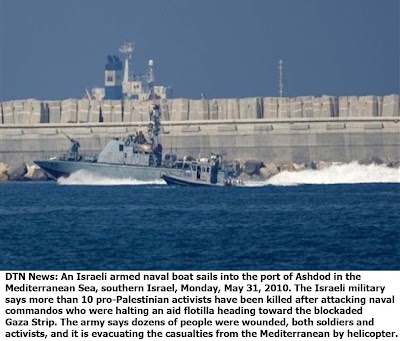 the Gaza Strip, the Israeli army says.
Armed forces boarded the largest vessel overnight, clashing with some of the 500 people on board.
It happened about 40 miles (64 km) out to sea, in international waters.
Israel says its soldiers were shot at and attacked with bars and knives; the activists say Israeli troops came on board shooting.
The European Union has called for an inquiry to establish what happened. 'Guns and knives'
The six-ship flotilla, carrying 10,000 tonnes of aid, left the coast of Cyprus on Sunday and had been due to arrive in Gaza on Monday.
Israel says its soldiers boarded the lead ship in the early hours but were attacked with knives, bars and gunfire.
We were not going to pose any violent resistanceAudrey Bomse Free Gaza Movement
"Unfortunately this group were dead-set on confrontation," Israeli government spokesman Mark Regev told the BBC.
"Live fire was used against our forces. They initiated the violence, that's 100% clear," he said.
Organisers of the flotilla said at least 30 people were wounded in the incident. Israel says 10 of its soldiers were injured, one seriously.
A leader of Israel's Islamic Movement, Raed Salah, who was on board, was among those hurt.
Audrey Bomse, a spokesperson for the Free Gaza Movement, which is behind the convoy, told the BBC Israel's actions were disproportionate.
"We were not going to pose any violent resistance. The only resistance that there might be would be passive resistance such as physically blocking the steering room, or blocking the engine room downstairs, so that they couldn't get taken over. But that was just symbolic resistance."
She said there was "absolutely no evidence of live fire".
Israel says it will tow the boats to the port of Ashdod and deport the passengers from there. It says it will deliver the ships' aid to Gaza. Condemnation
Turkish TV pictures taken on board the Turkish ship leading the flotilla appeared to show Israeli soldiers fighting to control passengers.

The footage showed a number of people, apparently injured, lying on the ground. A woman was seen holding a blood-stained stretcher.
Al-Jazeera TV reported from the same ship that Israeli navy forces had opened fire and boarded the vessel, wounding the captain.

The Al-Jazeera broadcast ended with a voice shouting in Hebrew, saying: "Everybody shut up!"
Israel's deputy Foreign Minister Danny Ayalon said his country "regrets any loss of life and did everything to avoid this outcome".
He accused the convoy of a "premeditated and outrageous provocation", describing the flotilla as an "armada of hate".
Palestinian Authority President Mahmoud Abbas condemned Israel's actions, saying it had committed a massacre.
Most of the people on board the boats were Turkish.
Turkey said it "strongly condemn[ed] these inhumane practices of Israel", AFP news agency reported.
In Turkey, dozens of protesters tried to storm the Israeli consulate in the Istanbul, while Israeli ambassadors have been summoned to the Turkish, Greek and Spanish foreign ministries to explain what happened. Blockade
Israel had repeatedly said it would stop the boats, calling the campaign a "provocation intended to delegitimise Israel".
Israel and Egypt tightened a blockade of Gaza after the Islamist movement Hamas took power there in 2007.
Israel says it allows about 15,000 tonnes of humanitarian aid into Gaza every week.
But the United Nations says this is less than a quarter of what is needed.
The incident comes a day before Israeli Prime Minister Benjamin Netanyahu is due to meet US President Barack Obama in Washington after one of the most strained periods in US-Israeli relations in year.
*This article is being posted from Toronto, Canada By DTN News ~ Defense-Technology News, contact: dtnnews@ymail.com
Related News:
*Deaths as Israel storms aid ship
*Israeli Arabs charged with spying
*Israeli PM accepts Obama invite
*Israel bombs Gaza in night raid
*Mid-East talks show no progress
Posted by DEFENSE NEWS at 6:24:00 AM 1 comment: