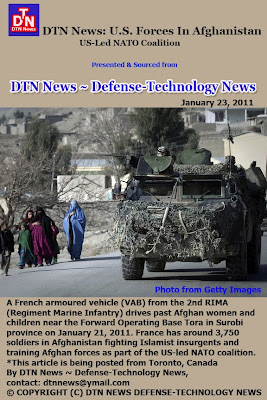 Source: DTN News - - This article compiled by Roger Smith from reliable sources General Dynamics - January 18, 2011
(NSI News Source Info) STERLING HEIGHTS, Mich. - January 23, 2011: General Dynamics Land Systems, a business unit of General Dynamics (NYSE: GD), was recently awarded two contracts worth $44 million for the Kingdom of Saudi Arabia’s tank program. The contracts were awarded by the U.S. Army TACOM Lifecycle Management Command on behalf of the Royal Saudi Land Forces. This work is part of a plan by the Kingdom of Saudi Arabia to upgrade its entire fleet of 314 tanks. 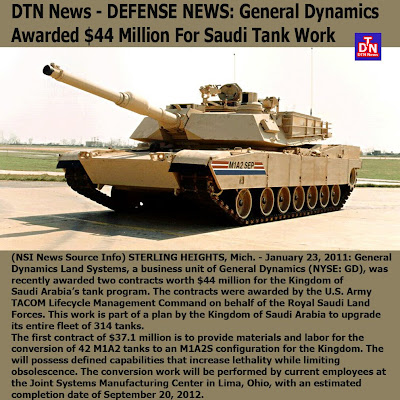 The first contract of $37.1 million is to provide materials and labor for the conversion of 42 M1A2 tanks to an M1A2S configuration for the Kingdom. The M1A2S will possess defined capabilities that increase lethality while limiting obsolescence. The conversion work will be performed by current employees at the Joint Systems Manufacturing Center in Lima, Ohio, with an estimated completion date of September 20, 2012.

The second contract, worth $6.9 million, will provide the tools and equipment needed to outfit a production facility in Saudi Arabia for future conversion of M1A2 tanks to the M1A2S version. Work will be performed in Sterling Heights, Mich., with an estimated completion date of August 1, 2012.

These contracts extend work started in 2008 to design, develop, convert, implement and test a hybrid configuration of the M1A1, M1A2 and M1A2 System Enhancement Package (SEP) tank variants for the Kingdom of Saudi Arabia. 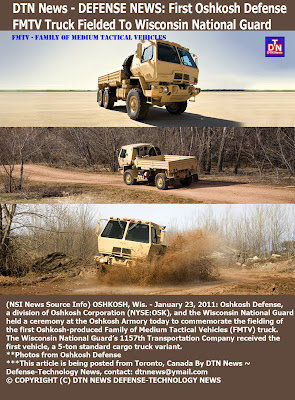 “It’s a special honor to field our first FMTV truck with the men and women of our home state’s and hometown National Guard,” said Mike Ivy, vice president and general manager of Army Programs for Oshkosh Defense. “The 1157th has a proud tradition of service both in the U.S. and in operational theaters, and relies heavily on the FMTV to accomplish its missions. Oshkosh Defense is extremely pleased to do our part in supporting the 1157th and many other active Army, Reserve and National Guard units with Oshkosh-built FMTV vehicles that will be fielded in the coming years.”

The fielding of the first Oshkosh FMTV truck comes less than a year after the FMTV contract award was affirmed to the company. Oshkosh has since expanded its Wisconsin and Michigan facilities, begun full-rate production, and offers the complete spectrum of training and sustainment support for the vehicles.

The U.S. Army and National Guard rely on the FMTV at home and abroad in combat operations, relief efforts and unit resupply missions, among other functions. The Army’s five-year FMTV requirements contract calls for the production of trucks and trailers, as well as support services and training, through calendar year 2014. To date, Oshkosh has received orders for more than 18,000 FMTV trucks and trailers.

The FMTV is a series of 17 models ranging from 2.5-ton to 10-ton payloads. Vehicles feature a parts commonality of more than 80 percent, resulting in streamlined maintenance, training, sustainment and overall cost efficiency for the U.S. Army and National Guard.

About Oshkosh Defense
Oshkosh Defense, a division of Oshkosh Corporation, is an industry-leading global designer and manufacturer of tactical military trucks and armored wheeled vehicles, delivering a full product line of conventional and hybrid vehicles, advanced armor options, proprietary suspensions and vehicles with payloads that can exceed 70 tons. Oshkosh Defense provides a global service and supply network including full life-cycle support and remanufacturing, and its vehicles are recognized the world over for superior performance, reliability and protection. For more information, visit www.oshkoshdefense.com.

®, ™ All brand names referred to in this news release are trademarks of Oshkosh Corporation or its subsidiary companies.

Forward-Looking Statements
This press release contains statements that the Company believes to be “forward-looking statements” within the meaning of the Private Securities Litigation Reform Act of 1995. All statements other than statements of historical fact, including, without limitation, statements regarding the Company’s future financial position, business strategy, targets, projected sales, costs, earnings, capital expenditures, debt levels and cash flows, and plans and objectives of management for future operations, are forward-looking statements. When used in this press release, words such as “may,” “will,” “expect,” “intend,” “estimate,” “anticipate,” “believe,” “should,” “project” or “plan” or the negative thereof or variations thereon or similar terminology are generally intended to identify forward-looking statements. These forward-looking statements are not guarantees of future performance and are subject to risks, uncertainties, assumptions and other factors, some of which are beyond the Company’s control, which could cause actual results to differ materially from those expressed or implied by such forward-looking statements. These factors include the impact on revenues and margins of the projected decrease in M-ATV production rates; the cyclical nature of the Company’s access equipment, commercial and fire & emergency markets, especially during periods of global economic weakness and tight credit markets; the Company’s ability to produce vehicles under the FMTV contract at targeted margins; the duration of the ongoing global economic weakness, which could lead to additional impairment charges related to many of the Company’s intangible assets and/or a slower recovery in the Company’s cyclical businesses than equity market expectations; the expected level and timing of U.S. Department of Defense (DoD) procurement of products and services and funding thereof; risks related to reductions in government expenditures in light of U.S. defense budget pressures and an uncertain DoD tactical wheeled vehicle strategy; the potential for the U.S. government to competitively bid the Company’s Army and Marine Corps contracts; the consequences of financial leverage associated with the JLG acquisition, which could limit the Company’s ability to pursue various opportunities; the potential for commodity and other raw material costs to rise sharply, particularly in a future economic recovery; risks related to the collectability of receivables, particularly for those businesses with exposure to construction markets; the cost of any warranty campaigns related to the Company’s products; risks related to costs and charges as a result of facilities consolidation and alignment; risks related to production delays arising from supplier quality or production issues; risks associated with international operations and sales, including foreign currency fluctuations and compliance with the Foreign Corrupt Practices Act; risks related to work stoppages and other labor matters; the potential for disruptions or cost overruns in the Company’s global enterprise system implementation; the potential for increased costs relating to compliance with changes in laws and regulations; and risks related to disruptions in the Company’s distribution networks. Additional information concerning these and other factors is contained in the Company’s filings with the Securities and Exchange Commission. All forward-looking statements speak only as of the date of this press release. The Company assumes no obligation, and disclaims any obligation, to update information contained in this press release. Investors should be aware that the Company may not update such information until the Company’s next quarterly earnings conference call, if at all.

*Oshkosh Defense to Supply More Than 4,700 FMTV Trucks and Trailers to the U.S. Army More »

*Oshkosh to Refurbish Heavy Vehicles in Theater for the U.S. Army More »