The agreement was signed during a committee meeting on economic cooperation of the Russian-Ukrainian intergovernmental commission.

"This is very important for us because it is a great step to the closed nuclear fuel cycle in our country," Ukrainian Fuel and Energy Minister Yuri Boyko said. "We have 15 nuclear reactors, and we should have our own nuclear fuel."

Ukraine's cabinet on September 22 approved TVEL as the winner of the tender to build a nuclear fuel plant in the country. The plant is to come online in 2014.

The deal would also help to determine the period during which Russia would supply nuclear fuel to Ukraine under the previously agreed contract.

The two neighbors signed a long-term deal to supply nuclear fuel to Ukraine this summer. The agreement contained a clause which directly linked the contract period with the results of the nuclear fuel plant construction tender.

"After the Ukrainian government decided on September 22 that TVEL won the contract to build a nuclear fuel production plant, the term of validity of the nuclear fuel supply contract was extended to the whole period while Russian-made reactors are operational in Ukraine, with an option to be renewed," said Alexander Lokshin, deputy head of Russia's state-run nuclear power corporation Rosatom.

Earlier the head of the Russian state nuclear corporation Rosatom, Sergei Kiriyenko, said the prospects of integrating the Russian and Ukrainian nuclear power industries are real.

Moscow and Kiev intend to establish a Russia-based joint venture on uranium enrichment, similar to the one established by Russia and Kazakhstan in Angarsk in East Siberia, Kiriyenko said.

A delegation of Russian ministers led by Prime Minister Vladimir Putin paid a visit to Ukraine on Wednesday to discuss a wide range of bilateral issues that included energy cooperation with Ukrainian top officials. 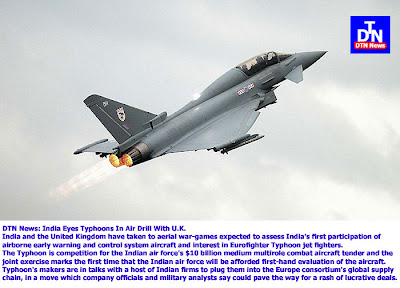 Typhoon's makers are in talks with a host of Indian firms to plug them into the Europe consortium's global supply chain, in a move which company officials and military analysts say could pave the way for a rash of lucrative deals.

The joint exercise, due to be concluded Nov. 3, opts to include combined maneuvers intended to help pilots improve their skills.

Emphasis will also be given to "exposing the controllers of AWACS aircraft to large-scale engagements and protection of high-value assets in addition to management of logistical needs," the Sify Web site reported.

It is an opportunity, Indian Air Marshal K.K. Nohwar was reported saying, "for both the air forces to get an insight into each others' operational philosophies and work cultures. This will greatly enhance the understanding of our air force to operate in scenario involving state-of-the-art technologies."

India announced plans recently to spend up to $30 billion on its military by 2012. Last week, it said it was locking in negotiations with Boeing, the second-largest U.S. defense contractor, which is hoping to bid for $31 billion worth of military contracts in India in the coming years.

A KPMG report estimates India's defense spending will swell even further, forecasting about $112 billion on defense procurement by 2016, creating offset opportunities worth $30 billion for the domestic industry.

Boeing will be competing against defense industry giants including Lockheed Martin and other suppliers for a string of orders set to sealed within the coming year.

Eurofighter Typhoon is competing with U.S. and Russian models to win a contract for 126 fighter jets estimated at about $11 billion. The Typhoon is co-produced by European firms that include EADS, BAE Systems and Finmeccanica.

Eurofighter has said that its plans to engage with Indian suppliers were independent of the 126 jet tender which is due to be decided on within the next six months.

"This demonstrates our commitment to integrating India into the program as a true and equal industrial partner," Bernhard Gerwert, chairman of the supervisory board of Eurofighter GmbH, told a group of journalists in New Delhi.

Source: DTN News / Int'l Media - By Sean O'Hare ~ telegraph.co.uk
(NSI News Source Info) LONDON, U.K. - October 28, 2010: Britain, in the wake of the MP expenses scandal, has slipped to its all-time lowest rating of 20th in the survey of 178 countries, compiled by Transparency International.

The ranking is based on the perceived levels of corruption among public officials and politicians, as assessed by experts at ten independent institutions including the World Bank,Economist Intelligence Unit and World Economic Forum.

It scores countries on a scale of 0 to 10, where 0 is perceived to be highly corrupt and 10 indicates low levels of corruption.

Scoring 9.3, Denmark, New Zealand and Singapore head the chart, followed closely by Finland and Sweden at 9.2.

President for the British Chamber of Commerce in Denmark Mariano A. Davies said: "The Danish mentality is to a great extent permeated by a Scandinavian cultural heritage known as 'Jante Law', where modesty, punctuality and equality are important measuring tools in the Danish way of life.

"For this reason, few people become seriously rich and even fewer are seriously poor. This rule of life is never very far from the surface of Danish life.

"In a business context, this will mean that Danes celebrate promotion with sensitivity and do not like people who promote themselves bombastically and at the expense of others.

"There is a sense of watchdog mentality underlying the Danish way of life resulting in very clear 'dos and don’ts'”.

"Furthermore, from a business perspective, it can take a very long time (and therefore a local presence) to earn the trust of a company in a supplier role and this trust can be lost very quickly."

Unstable governments, often with a legacy of conflict, continue to dominate the bottom rungs of the CPI. Afghanistan and Myanmar share second to last place with a score of 1.4, with Somalia coming in last with a score of 1.1.

Hugo Chavez's Venezuela ranked 164, below countries such as Zimbabwe, Sierra Leone and the Democratic Republic of Congo. Responding to the survey the Venezuelan Ambassador to the UK and Ireland, Dr Samuel Moncada, called the Corruption Perception Index "hot air and propaganda".

Speaking on BBC's Newsnight programme he said: "Rich countries play an integral part in the corruption of the poor countries when we talk about drug money, banks, the financial crisis.

"Private banks received millions of pounds of public money and nobody in the rich countries calls that corruption. If that happened in Venezuela we would have been called the most corrupt country in the world."

The 2010 CPI shows that nearly three quarters of the 178 countries in the index score below five, indicating a serious corruption problem.

Chair of Transparency International, Huguette Labelle, said: "These results signal that significantly greater efforts must go into strengthening governance across the globe.

"With the livelihoods of so many at stake, governments’ commitments to anti-corruption, transparency and accountability must speak through their actions.

"Good governance is an essential part of the solution to the global policy challenges governments face today.”

Deccan Herald - ‎1 hour ago‎
Amid an atmosphere of mistrust between Beijing and New Delhi over a range of issues, the November visit of American President Barack Obama to India will be watched cautiously by China which, in the past, has viewed the growing Indo-US strategic ...
Obama should back India for permanent UNSC seat: think tank The Hindu
Obama to focus on the economics of India-US ties MSN India
NDTV.com - Financial Express - Washington Post - IBNLive.com
all 557 news articles »

US LET US DOWN ON DAVID HEADLEY: HOME SECRETARY

Hindustan Times - ‎1 hour ago‎
US ambassador to India, Timothy Roemer, promptly denied the charge. Though the US had Headley on its radar for a long time, the Federal Bureau of Investigation shared information with its Indian counterparts only after Headley was arrested at Chicago ...
Pillai again on 26/11: Raises Headley, gets a US response Indian Express
India, US spar over info-sharing on Headley Zee News
Sify - Deccan Herald - Economic Times - The Hindu
all 57 news articles »
हिंदी में

CAN GO BEYOND CONSTITUTION IF NEEDED: INTERLOCUTORS

Indian Express - ‎54 minutes ago‎
The three-member team of interlocutors appointed by the Centre for an attempt at peace in the Valley talked of the possibility - albeit distant - of Parliament coming around to amend the Constitution if a solution required the same.
Involve Pok, Parliament: J&K team Hindustan Times
Adopt realistic approach to finding solution acceptable to all, including PoK ... The Hindu
Daily News & Analysis - Rising Kashmir - Sify - Daily Pioneer
all 793 news articles »
हिंदी में

The Hindu - Neena Vyas - ‎1 hour ago‎
A fresh attempt has been made by a Narendra Modi supporter in the Bharatiya Janata Party to focus attention on the “famous and praiseworthy” Chief Minister who has delivered “a huge electoral victory” to 'nationalist forces' in Gujarat.
Modi camp angry over Sushma take Deccan Chronicle
Narendra Modi is a national-level leader: BJP Daily News & Analysis
Sify - Times of India - Indian Express - IBNLive.com
all 24 news articles »
हिंदी में

Times of India - ‎22 minutes ago‎
NEW DELHI: After Ram Jethmalani, it was NDA partner JD(U)'s turn to take on the BJP saying the demand for action against hardline Hurriyat leader Syed Ali Shah Geelani and writer-activist Arundhati Roy for their speeches on Kashmir was an ...
Video: Should sedition cases be filed against Arundhati Roy and Geelani?

Daily Pioneer - Vr Jayaraj - ‎1 hour ago‎
Reaffirming once again that the end of the Left's supremacy in Kerala politics is imminent, the people of the State voted the CPI(M)-led ruling LDF out of power in majority of the local administration bodies.
Impressive win for UDF in Kerala Deccan Herald
Left front suffers a beating in Kerala civic polls IBNLive.com
Sify - Livemint - Central Chronicle - indiablooms
all 105 news articles »

THACKERAY COUSINS SLUG IT OUT IN KALYAN, DOMBIVLI

Hindustan Times - ‎1 hour ago‎
A day after a student tried to commit suicide by jumping off his school building, the Delhi Government has ordered a probe into the incident.
Delhi student's fall from school building to be probed Sify
Father called, teen jumps from school building Times of India
IBNLive.com - SamayLive - NDTV.com - India Today
all 22 news articles »
हिंदी में

Hindustan Times - ‎1 hour ago‎
The Supreme Court on Wednesday asked the West Bengal Government to pay compensation to all victims of the Nandigram police firing in which 14 protesters were killed and over 100 injured.
Nandigram firing: SC asks WB govt to comply with its order The Hindu
Don't treat Bengal as accused in Nandigram firing, CBI told Sify
Times of India - Law et al. News - indiablooms - NDTV.com
all 38 news articles »

Indian Express - ‎31 minutes ago‎
A Day after she allegedly threw her daughter out of a hospital window, Deepika Parmar of Dahisar was charged with murder on Wednesday.
Video: Monster mom throws baby out of window