Pakistan gave China access to the previously unknown U.S. "stealth" helicopter that crashed during the commando raid that killed Osama bin Laden in May despite explicit requests from the CIA not to, the Financial Times reported on Sunday. 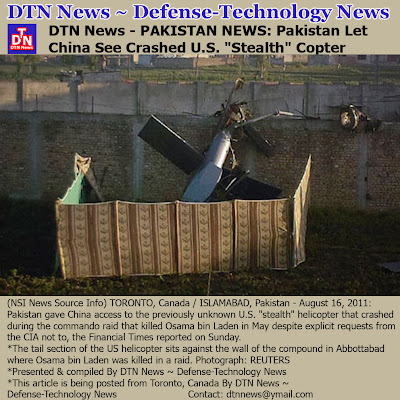 The disclosure, if confirmed, is likely to further shake the U.S.-Pakistan relationship, which has been improving slightly after hitting its lowest point in decades following the killing of bin Laden.

During the raid, one of two modified Blackhawk helicopters, believed to employ unknown stealth capability, malfunctioned and crashed, forcing the commandos to abandon it.

"The U.S. now has information that Pakistan, particularly the ISI, gave access to the Chinese military to the downed helicopter in Abbottabad," the paper quoted a person "in intelligence circles" as saying on its website.

It said Pakistan, which enjoys a close relationship with China, allowed Chinese intelligence officials to take pictures of the crashed aircraft as well as take samples of its special "skin" that allowed the American raid to evade Pakistani radar.

One U.S. official, speaking on condition of anonymity, told Reuters there was reason to believe Pakistan had allowed the Chinese to inspect the aircraft. But the official could not confirm it happened with certainty.

No one from the Pakistani army was available for comment, but the Inter-Services Intelligence Directorate (ISI), Pakistan's top spy agency, denied the report. The paper said Pakistan's top general, chief of army staff Ashfaq Kayani, denied that China had been given access.

The surviving tail section, photos of which were widely distributed on the Internet, was returned to the United States following a trip by U.S. Senator John Kerry in May, a spokesman for the U.S. embassy told Reuters.

Shortly after the raid, Pakistan hinted that it might give China access to the helicopter, given its fury over the raid, which it considers a grievous violation of its sovereignty.

"We had explicitly asked the Pakistanis in the immediate aftermath of the raid not to let anyone have access to the damaged remains of the helicopter," the Financial Times quoted the source as saying.

In an incident such as the helicopter crash, it is standard American procedure to destroy sophisticated technology such as encrypted communications and navigation computers.

Pakistan is a strategic ally to the United States but the relationship has been on a downward spiral since the killing of the al Qaeda leader in the raid by U.S. forces.

Islamabad was not informed in advance and responded by cutting back on U.S. trainers in the country and placing limits on CIA activities there.

The fact that the al Qaeda chief lived for years near the Pakistani army's main academy in the northwestern garrison town of Abbottabad reinforced suspicions in Washington about Islamabad's reliability in the war against militant Islamists.

There are also growing frustrations with Pakistan over its reluctance to mount offensives against militant factions in the northwest who are fighting U.S.-led foreign forces across the border in Afghanistan.

In a show of displeasure over Pakistan's cutback in U.S. trainers, its limits on visas for U.S. personnel and other bilateral irritants, the United States has suspended about a third of its $2.7 billion annual defense aid to Pakistan.

Despite this, both sides have tried to prevent a breakdown of relations.

Despite the billions in aid, Pakistan still considers China a more reliable ally than the United States. China is a major investor in predominantly Muslim Pakistan in areas such as telecommunications, ports and infrastructure. The countries are linked by a Chinese-built road pushed through Pakistan's northern mountains.

Trade with China is worth almost $9 billion a year for Pakistan, and China is its top arms supplier.

In the wake of attacks that left 11 people dead in the China's western region of Xinjiang in late July, Pakistan dispatched the ISI's Pasha to Beijing.

(Writing and additional reporting by Chris Allbritton in Islamabad, Mark Hosenball and Phil Stewart in Washington; Editing by Rosalind Russell and Alison Williams)

"We have sent the release warrant of Anna Hazare and his supporters," Delhi Police PRO Rajan Bhagat. 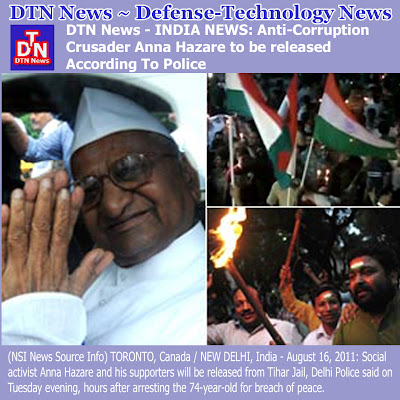 Hazare was detained on Tuesday morning ahead of his planned fast-unto-death for a stronger lokpal bill.

He was arrested when he refused to sign a bail bond and was sent to Tihar Jail along with his key confidante Arvind Kejriwal and other supporters.

Bhagat said the Tihar Jail authorities would take a final call on when Hazare will be released.

His arrest triggered swathes of unrest across the country and pitting the government against not just the opposition but also large sections of the public.

Bedi and Kejriwal were later released from preventive custody.

"Anna Hazare refused to sign a personal bond and has been sent to seven days judicial custody," Bhagat told reporters, describing it as a preventive arrest.

The opposition went on the warpath to demand Hazare's release.

As the Bharatiya Janata Party (BJP) said the move smacked of the excesses during Emergency and parliament was stalled, the outrage spread across the country, with reports of protests coming in from virtually every corner.

Hazare and Kejriwal were whisked away as they stepped out of an apartment in east Delhi on their way to the JP Park where police had clamped prohibitory orders and where the activists were planning to set the stage for their strike against the government's version of the bill that keeps the prime minister, judiciary and junior officials out of its ambit.

Hazare's supporters, who had gathered in hundreds in the apartment complex, shouted anti-government slogans and lauded the anti-corruption crusader who had gone on a hunger strike in April.

Just before his arrest, Hazare said in a recorded video message: "Don't let my arrest stop this movement. This is the nation's second struggle for freedom." Read full story | Watch video

As news of his arrest spread, thousands took to the streets in Delhi, denouncing the government and hailing Hazare. The biggest gathering took place at the Chattrashal Stadium in north Delhi.

Major protests were also reported in Delhi University, outside the Tihar Jail, and on the street leading from Rajghat to JP Park.

Security forces had a tough time handling the crowds.

Protests also gripped many states including Chhattisgarh, Uttar Pradesh, Himachal Pradesh, Maharashtra, Jammu and Kashmir, Madhya Pradesh and Orissa where people trooped out of their homes to voice their anger. Many shopkeepers downed shutters.

"We are also requesting supporters to strike work tomorrow and support Annaji," a volunteer for India Against Corruption said.

Celebrities too stepped in to verbalise their distress.

Lyricist Javed Akhtar said: "I have had certain reservations about Anna's method but his arrest cannot be condoned. It is undemocratic, unacceptable."

The ripple effect was widespread.

"In a democracy, one has the right to protest in a peaceful manner. By detaining Hazare, the government is depriving the citizens of their constitutional rights," said PK Garg, a retired professor in Lucknow.

As the protests spread, the government attempted to clarify its position and said Delhi Police was not acting under political pressure and had made the detentions because Team Hazare had refused to agree to certain terms.

"If someone says we will defy the orders, I think this is unacceptable in a democracy," said home minister P Chidambaram.

"It is a real regret that police have taken this action."

The crisis for the government comes soon after the clampdown on a protest by yoga guru Ramdev on June 5.

The opposition was quick to seize the opportunity.

BJP president Nitin Gadkari and the Communist Party of India-Marxist (CPI-M), neither of which agree fully with Hazare, called for demonstrations across the country Wednesday.

"This government is bent upon crushing anyone who wants to protest against corruption," BJP spokesperson Ravi Shankar Prasad said.

The CPI-M said Hazare's detention and the police ban on his hunger strike showed how "the Congress leadership is intolerant to any anti-corruption movement as its government is steeped in high-level corruption".

The volatile situation was set to snowball further with protests planned through the day.