CONTRACTS
NAVY
Softchoice, McLean, Va., is being awarded a firm-fixed-price blanket purchase agreement to procure Microsoft brand name software licenses and software support, known as software assurance (SA), through 2015 for the Department of the Navy.  The licenses and SA must be compatible and interoperable with existing Department of the Navy hardware and technology equipment.  The maximum dollar value, including the base period and two option periods is $700,000,000.  Work will be performed in McLean, Va., and is expected to be completed May 31, 2015.  Contract funds will not expire at the end of the current fiscal year.  This agreement was solicited via General Services Administration eBuy electronic request and five offers were received.  The Marine Corps Systems Command, Quantico, Va., is the contracting activity (M67854-12-A-4701).

Sikorsky Aircraft Corp., Stratford, Conn., is being awarded a $9,064,199 modification to a previously awarded firm-fixed-price contract (N00383-06-D-003F) for the incorporation of two Naval Air Systems Command approved engineering change proposals supporting the H-53 helicopter:  Dynamic Component Change No. 97 swashplate, and Dynamic Component Change No. 94 gearbox.  Work for the nose gearboxes will be performed at the Fleet Readiness Center (FRC) East, Cherry Point, N.C. (70 percent), and Sikorsky Aircraft, Stratford, Conn. (30 percent).  Work for the swashplates will be performed at FRC East, Cherry Point, N.C.  All work is expected to be completed by February 2016.  The applicable Navy Working Capital funds will not expire before the end of the current fiscal year.  This contract was not competitively procured.  The NAVSUP Weapon Systems Support, Philadelphia, Pa., is the contracting activity.

U.S. TRANSPORTATION COMMAND
Evergreen Helicopters of Alaska, Anchorage, Alaska, is being awarded a $15,903,080 option year modification for fixed wing aircraft, personnel, equipment, tools, material, maintenance and supervision necessary to perform passenger and cargo air transportation services.  Work will be performed in Afghanistan and the option will start June 1, 2012, to be completed by May 31, 2013.  This contract was a competitive acquisition with seven offers received. U.S. Transportation Command Directorate of Acquisition, Scott Air Force Base, Ill., is the contracting activity (HTC711-10-D-R017).
*Link for This article compiled by Roger Smith from reliable sources U.S. DoD issued No.  418-12 May 23, 2012*Speaking Image - Creation of DTN News ~ Defense Technology News *This article is being posted from Toronto, Canada By DTN News ~ Defense-Technology News Contact:dtnnews@ymail.com ©COPYRIGHT (C) DTN NEWS DEFENSE-TECHNOLOGY NEWS
Read more »
Posted by DEFENSE NEWS at 12:23:00 AM No comments:

Source: DTN News - - This article compiled by Roger Smith from reliable sources By Karen Parrish - American Forces Press Service(NSI News Source Info) TORONTO, Canada - May 23, 2012: Military-to-military talks between the U.S. and Pakistan, which recently resumed after a lapse, are going well, the commander of NATO and U.S. forces in Afghanistan said today. 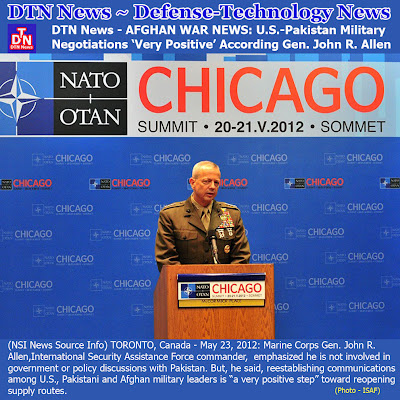 Marine Corps Gen. John R. Allen, International Security Assistance Force commander, acknowledged during a Pentagon press briefing that the issue of reopening Pakistani ground supply routes to NATO is still unresolved. Pakistan closed the routes after a late-November 2011 cross-border attack by NATO forces near a border coordination center in Afghanistan’s Kunar province accidently killed 24 Pakistani soldiers.
“I have recently led a team to Islamabad to renew our conversation with the Pakistani military,” Allen said, noting the participants had “a very positive conversation about taking steps and measures necessary to prevent a recurrence of the events of 25 and 26 November.”
He said Lt. Gen. Shir Mohammad Karimi, general staff chief of operations for the Afghan National Army, also traveled to Islamabad for the two-day military talks with Gen. Ashfaq Parvez Kayani, the Pakistani army chief of staff.
“We committed ourselves to recurring meetings … with the idea of creating a constructive long-term relationship between Afghanistan and Pakistan,” Allen said.
Allen noted Pakistan has many challenges along its border with Afghanistan. Pakistan’s forces are also fighting an insurgency, he said, and they have taken more casualties in the last two years than the U.S. has in 10 years of combat in Afghanistan.
“Where we can find intersection of our interests, we should leverage those,” the general said. “And I think we're to the point where that conversation can occur.”
Since the ground supply routes through Pakistan into Afghanistan closed in November, Allen said, military cargo has moved through the northern distribution network, a set of logistic arrangements connecting Baltic and Caspian ports with Afghanistan via Russia, Central Asia and the Caucasus.
Immediately after Pakistan closed off the ground supple routes, the U.S. Air Force and U.S. Transportation Command ramped up transport schedules to maintain the flow of supplies, Allen said.
“One of the great resources of the United States is the United States Air Force,” the Marine Corps general noted. The United States’ strategic logistics capabilities ensured the campaign and the supply chain supporting it continued uninterrupted, he added.
Supply stocks in Afghanistan are greater today than they were November 25, Allen said. At no point, he said, had gasoline dropped to less than a 30-day supply, the lowest level any supply stock had reached since the closure.
Allen noted the current routes are about twice as expensive and take more time than did supplies arriving through the ground route from Pakistan.
Allen emphasized he is not involved in government or policy discussions with Pakistan. But, he said, reestablishing communications among U.S., Pakistani and Afghan military leaders is “a very positive step” toward reopening supply routes.
“It is a negotiation, and negotiations take time, so I can't predict what the outcome will be and how soon that will be,” he said.
*Link for This article compiled by Roger Smith from reliable sources By Karen Parrish - American Forces Press Service*Speaking Image - Creation of DTN News ~ Defense Technology News *This article is being posted from Toronto, Canada By DTN News ~ Defense-Technology News Contact:dtnnews@ymail.com ©COPYRIGHT (C) DTN NEWS DEFENSE-TECHNOLOGY NEWS
Read more »
Posted by DEFENSE NEWS at 12:20:00 AM No comments: