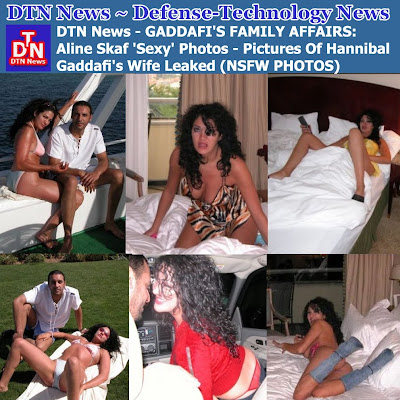 One of the photos depicts Skaf, who New York Magazine reports used to be a model, posing seductively in a bathing suit. Another photo shows her leaning in to kiss her husband, her bright red underwear visible.

Hannibal Gaddafi and Skaf made headlines in the winter of 2010 when police were called to their London hotel after Gaddafi reportedly hit his wife, breaking her nose and sending her to the hospital,The Daily Mail reports. She later said she suffered the facial injuries in an accidental fall.

In August, CNN reported that Skaf had tortured Shwygar Mullah, a nanny taking care of her children, by pouring boiling water on her head.

In September, The Independent reported that a laptop found in one of Hannibal's homes in Tripoli contained dozens of images of his family, including pictures of him and his wife with animals -- including a huge python -- "borrowed" from the local zoo. One picture depicts Skaf "scantily dressed, looking nervous, with the snake draped around her,"according to The Independent.

It's not clear if these images are from the same computer.

Found via Gawker via JonTurk via Egotastic. Defense News: DTN News - DEFENSE NEWS: The 'Nasty' Computer Virus Infecting U.S. Military Drones
**Unmanned aircraft used by the Air Force for espionage and combat have been stung by malware. Should we be worried?

Source: DTN News - - This article compiled by Roger Smith from reliable sources The Week
(NSI News Source Info) KOTTAKKAL, Kerala, India - October 11, 2011: A fleet of American Predator and Reaper drones has been infected with a computer virus, reports Noah Shachtman at Wired. The unmanned aircraft, which allow the military to attack targets without risking the lives of U.S. soldiers, have become a key tool in America's war on terrorism. 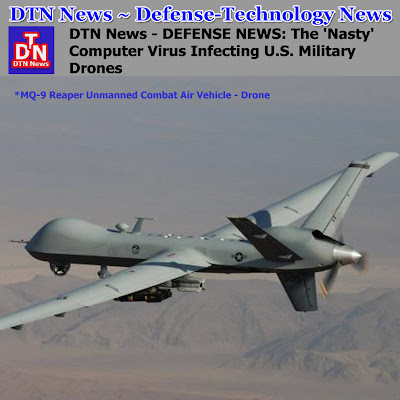 Since President Obama took office, drones have killed more than 2,000 suspected militants and civilians. But now, it's the drones that are being targeted. Here's what you should know:
What does the virus do?
It's a "nasty" virus called a keylogger, says Max Eddy at Geekosystem. Pilots maneuvering drones issue commands remotely with keyboards and joysticks. And this virus can record every single keystroke.
How dangerous is this?
Because hackers might use any new information to refine their tactics, the Air Force doesn't publicly discuss attacks on its computer networks, says the Washington Post. But Wired's Shachtman says the infection has hit classified and unclassified machines at Creech Air Force Base in Nevada, which at least raises the possibility that secret data may have been captured — though no specific reports of classified information leaks have yet surfaced.
Where did the virus come from?
It's not clear if the virus infiltrated the military's computer systems through "a typical infection, or if it was specifically created to target the drone computer control system," says Dean Takahashi at Venture Beat. In other words: No one knows for sure how it got there.
What now?
Computer specialists at Creech are still trying to wipe the virus off their machines. Thus far, they've reportedly been unsuccessful, as the virus resists every effort to eliminate it. Officials are also in the process of erasing their internal hard drives to rebuild them from scratch — a rather "time consuming effort," says Shachtman.