Netanyahu's tour of the top-security Flotilla 13 base on the coast near Haifa was a show of defiance against international censure of the raid on the converted cruise liner Mavi Marmara.

It followed testimony on Sunday from Israel's military chief, who told a state-appointed inquest into the operation that the commandos had come under pistol, knife and cudgel attacks while boarding and fired 308 live bullets in response.

Activists from the Mavi Marmara have confirmed they resisted the Israeli boarding party but denied provoking lethal violence.

Netanyahu said the May 31 raid on the Turkish-flagged vessel, one of six ships trying to run Israel's naval blockade of the Gaza Strip, had been "crucial, essential, important and legal".

"Gaza has turned into an Iranian terror base," he said, referring to the Palestinian territory controlled by Hamas Islamists, in a speech to around 200 members of the unit.

He heaped praise on the commandos, saying they had acted "courageously, morally and with restraint".

The night-time interception on Mediterranean high seas and the ensuing bloodshed strained Israel's once-close ties with Turkey, which has demanded an apology and compensation.

A United Nations probe last month condemned the attack as unlawful and said it resulted in violations of human rights and international humanitarian law. U.N. jurists also said the Gaza blockade had caused a humanitarian crisis and was unlawful.

Flotilla 13 commandos had been equipped with riot-dispersal gear but quickly switched to live fire during deck brawls with dozens of activists. The ship had ignored Israeli calls to stop.

Two commandos were shot and wounded and another five suffered other injuries, the navy said. In addition to the nine Turkish dead, 24 activists were hurt, many of them by gunfire.

"You acted against those who came to kill you and tried to kill you," said Netanyahu. "There is no one better than you. I salute you."

He then met some of the commandos who took part in the raid, shaking their hands on a prow-shaped veranda overlooking the craggy bay at their Atlit base. They were shadowed by bodyguards and, out to sea, a squad of commandos in a speed boat.

Bristling at Turkish and other foreign fury over the Mavi Marmara raid yet wary of international war crimes suits, Israel set up its own inquiry to help prepare its submission for a separate probe under U.N. Secretary-General Ban ki-Moon.

Interim findings from that inquest, under retired Supreme Court justice Jacob Turkel, are due out in mid-November and the final report by early 2011, a spokesman said. Another internal investigation by an Israeli ex-general is already complete.

Turkey withdrew its ambassador from Israel and cancelled joint military exercises in protest at the Mavi Marmara raid and has dismissed the Israeli inquiries as insufficient.

Officials said it showed Iran's nuclear plans were on track despite sanctions aimed at forcing it to curb uranium enrichment which many countries fear is aimed at developing atomic bombs.

But the head of the United Nations' nuclear watchdog called on Iran to address concerns about its true intentions and several European energy companies said they were reducing their dealings with the Islamic Republic due to sanctions.

"This day will be remembered ... because it was the day when fuel was lowered into the core of the reactor," said Ali Akbar Salehi, head of Iran's Atomic Energy Organisation.

Amid great media fanfare, fuel rods were transported into the reactor building in August, but they were not inserted into its core and the plant's start-up was delayed due to what were described as minor technical problems.

At a much lower-key news conference, broadcast live from the plant on Iran's coast, Salehi said it would take a further two months to complete the process of lowering 163 fuel assemblies into the core of the reactor and running tests. He said three fuel assemblies had been inserted so far.

The Russian-built 1,000-MW plant will feed Iran's first nuclear power into the national grid early next year, he said.

"If it were in Europe it would supply electricity to about 800,000 or 900,000 people," said Ian Hore-Lacy, of the World Nuclear Association (WNA) industry body.

Iran has denied that the "Stuxnet" computer virus delayed the start-up, although it did infect some computers at Bushehr. Some analysts speculated the worm was designed by Iran's enemies to sabotage the nuclear programme.

Alaeddin Boroujerdi, the head of Iran's parliamentary committee on foreign policy and national security, called the fuelling of Bushehr a victory against sanctions.

"What counts a lot in this process is that America mobilised all its resources across the world to ratchet up the pressure on the Islamic Republic of Iran and they believe that imposing sanctions on us will deter us from making progress," he said.

A U.N. Security Council resolution passed in June, imposing a fourth round of sanctions, renewed a call on Iran to suspend uranium enrichment, something Tehran has explicitly refused to do, saying such activity is its right under international law.

Pakistan has resisted mounting US pressure to launch a major operation in North Waziristan to eliminate the Haqqani Taliban faction.

Pakistan's army has repeatedly said it is too stretched fighting Taliban insurgents in other forbidding mountaineous regions, and that only it can determine if and when to strike.

Lt.-Gen Asif Yasin Malik, the main military commander for the northwest, said it would take at least six months to clear militants from Bajaur and Mohmand, two of Pakistan's seven semi-autonomous tribal agencies.

“What we have to do is stabilise the whole area. I have a very large area in my command,” he told reporters on a trip to Orakzai agency. “The issue is I need more resources.”

There are already six brigades in North Waziristan which carry out daily operations, he said

RELATED NEWS
Posted by DEFENSE NEWS at 8:31:00 PM No comments:

Source: DTN News - - This article compiled by Roger Smith from reliable sources including TOI & Reuters
(NSI News Source Info) WASHINGTON - October 27, 2010: The Pentagon says WikiLeaks may have more classified US material than previously thought.
The website of the international anti-secrecy group has already posted half a million secret Iraq and Afghanistan war files since July.

The group is also believed to have another 15,000 Afghan war field reports, 260,000 diplomatic cables and US video of casualties in Afghanistan.
Defence Department spokesman Col Dave Lapan told reporters today the Pentagon suspects the group may have even more classified US data than previously reported, but declined to characterise it. 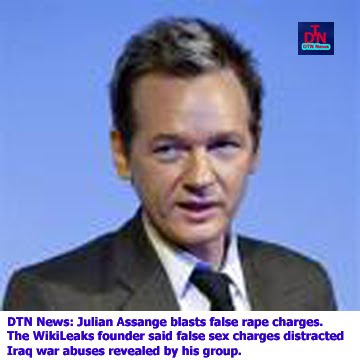 The US has said that the release of secret Afghan and Iraq wardocuments threatens national security.

WikiLeaks, which already has made public nearly 500,000 classified U.S. files on the wars in Iraq and Afghanistan, has more U.S. documents for possible release than it has stated, the Pentagon said on Tuesday.

The massive WikiLeaks disclosures of leaked documents have been the largest in U.S. military history, and Pentagon officials are saying that more files may follow.

The whistle-blowing organization has publicly acknowledged it has some 15,000 more documents on the war in Afghanistan that it has threatened to release, along with an Afghanistan video file, the Pentagon noted.

"Those are things they've talked about publicly. And we have reason to believe they have other documents as well," Colonel Dave Lapan, a Pentagon spokesman, told reporters.

Asked whether the Pentagon had independent knowledge of what WikiLeaks had in its possession, he said: "We do," without elaborating.

The U.S. investigation into the source of the leaks has focused on Bradley Manning, a former U.S. Army intelligence analyst in Iraq. Manning is under arrest, charged with leaking a classified video showing a 2007 helicopter attack that killed a dozen people in Iraq, including two Reuters journalists.

No one has yet been charged with leaking any of the more than 70,000 files on the Afghanistan war that WikiLeaks released in July or the nearly 400,000 Iraq war files disclosed last Friday.

Manning's attorney did not return phone calls. The Pentagon has refused to discuss the investigation.

WikiLeaks founder Julian Assange has said the U.S. investigation is also looking into WikiLeaks itself.

Lapan said the Pentagon believes it knows which documents WikiLeaks has in its possession, including a large, encrypted file on its website entitled "insurance," which has not been released to the public.

"We believe we know some of what they have," Lapan said.

Earlier on Tuesday in Baghdad, a top Pentagon official said the U.S. Defense Department was considering controls like those that credit card firms use to detect odd behavior to prevent leaks of sensitive information.

"Rather than preventing people from having access to the data, could we do things like credit card companies do, which is to look for anomalous behavior," Deputy Defense Secretary William Lynn told reporters during a brief visit to Iraq.

"If someone is doing something that doesn't seem appropriate for where they are, downloading 100,000 documents when they are out in some obscure corner of the country, why are they doing that? You go out and ask them," Lynn said.

*THIS ARTICLE IS BEING POSTED FROM TORONTO, CANADA BY DTN NEWS ~ DEFENSE-TECHNOLOGY NEWS, CONTACT:DTNNEWS@YMAIL.COM
Posted by DEFENSE NEWS at 8:28:00 PM No comments: