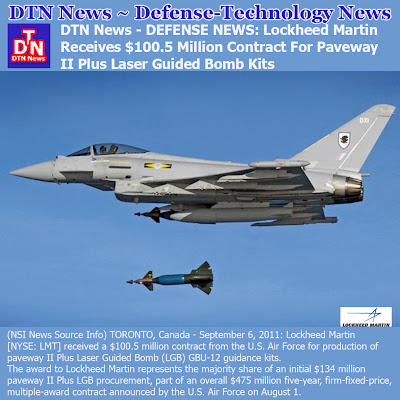 The award to Lockheed Martin represents the majority share of an initial $134 million paveway II Plus LGB procurement, part of an overall $475 million five-year, firm-fixed-price, multiple-award contract announced by the U.S. Air Force on August 1.
Deliveries on the contract will begin in 2012. The GBU-12 guidance kits consist of the recently integrated MAU-209C/B computer control group, which contains the electronic guidance system, and the MXU-650 air foil group, which provides lift and stability to the weapons. Lockheed Martin’s paveway II Plus LGB guidance kits significantly improve weapon accuracy and reduce risk to U.S. and allied ground forces when compared to the legacy paveway II weapons.
Lockheed Martin is currently producing paveway II Plus LGB GBU-12 kits for the U.S. Air Force and U.S. Navy as part of a $34 million U.S. Air Force contract awarded in 2010.
“The Lockheed Martin paveway II Plus LGB raises the bar in performance for paveway II accuracy and precision,” said Joe Serra, senior manager for precision guided systems in Lockheed Martin’s Missiles and Fire Control business. “This contract is a testament to our commitment to continuous product improvement, combined with our ability to deliver a better performing product to our customer at the lowest cost.”
Lockheed Martin’s LGB kits can be carried on U.S. Air Force, U.S. Navy and most international aircraft platforms currently authorized to carry and release LGBs. The paveway II Plus LGB does not require upgrades or modifications to aircraft, ground handling equipment or logistics support, and continues the same basic paveway II concept of operation for employment by converting conventional gravity weapons into precision-guided munitions.
Lockheed Martin is a qualified provider of all three variants of paveway II MK-80 series LGBs, and is the sole provider of the paveway II Enhanced Laser Guided Training Round and Dual Mode Laser Guided Bomb. Lockheed Martin has delivered more than 55,000 LGB kits to the U.S. Air Force, U.S. Navy and international customers. Laser guided bombs have been used successfully in Operation Iraqi Freedom and current overseas contingency operations.
Headquartered in Bethesda, Md., Lockheed Martin is a global security company that employs about 126,000 people worldwide and is principally engaged in the research, design, development, manufacture, integration and sustainment of advanced technology systems, products and services. The Corporation’s 2010 sales from continuing operations were $45.8 billion.
Missiles and Fire Control
P.O. Box 650003
Dallas, TX 75265-0003
(972) 603-1000
*Link for This article compiled by Roger Smith from reliable sources Lockheed Martin
*Speaking Image - Creation of DTN News ~ Defense Technology News
*This article is being posted from Toronto, Canada By DTN News ~ Defense-Technology News
Contact:
dtnnews@ymail.com 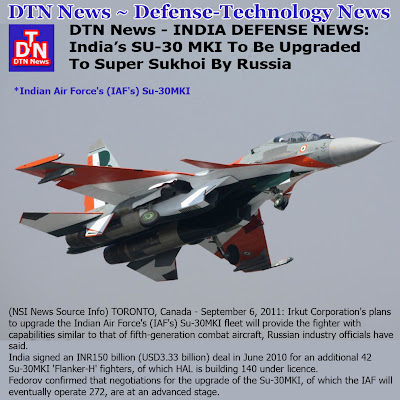 Speaking at the Moscow Air Show on 19 August Alexei Fedorov, the head of Irkut, announced that in addition to upgraded cockpit avionics and enhancements to the aircraft's radar, the so-called 'Super Sukhoi' will also receive modifications aimed at improving stealth capabilities. While the exact nature of these stealth modifications remains unclear, reports suggest the work will specifically focus on reducing the aircraft's radar signature.
The enhancements to the aircraft's radar could include upgrading the existing NIIP N011M Bars radar with an active electronically scanned array (AESA) antenna, thereby offering a substantial improvement in performance.
"The upgrade will apply not only to the aircraft in service with the IAF, but also to those yet to be delivered to India and those being licence-manufactured by Hindustan Aeronautics Limited [HAL]," Fedorov said.
India signed an INR150 billion (USD3.33 billion) deal in June 2010 for an additional 42 Su-30MKI 'Flanker-H' fighters, of which HAL is building 140 under licence.
Fedorov said the 'Super Sukhoi' would be able to carry a heavier weapon load, including the Indo-Russian developed BrahMos cruise missile, but declined to provide technical details of the upgrade or its cost as negotiations are continuing.
Although the price of the Sukhoi upgrade project is still to be finalized, the cost is likely to be to the tune of $ 1 billion which will make the Su-30 MKI extremely advanced with its fifth generation fighter plane features. India will eventually have over 230 Sukhoi-30MKIs or 13 squadrons in its fleet and all of these will be upgraded to Super Sukhoi’s.
Meanwhile, there is a lot to be clarified what the "Super Sukhoi” aircraft will actually be worth in terms of fifth generation capability. It has been accepted that stealth is the standard for fifth generation aircraft as well as its ability to super cruise. In addition, a next generation BVR missile and AESA radar are also needed for a fighter to qualify as a fifth generation fighter. Experts question whether the Su-30 MKI can super cruise. Also, without heavy structural changes equivalent to an entire new design, it remains to be seen if the fighter can be converted into stealth and have reduced radar signature. It has been argued that engines alone are not the only factor for super cruise as there has to be structural changes to enable that. Fedorov confirmed that negotiations for the upgrade of the Su-30MKI, of which the IAF will eventually operate 272, are at an advanced stage.
Meanwhile, India and Russia are also working on two other crucial projects, namely the fifth generation fighter aircraft (FGFA) project and the Multi Role Transport Aircraft (MTA) project. State-run HAL is participating in the fifth generation fighter aircraft (FGFA) project which will make India the only country outside of the US and Russia to have a fifth generation fighter. HAL's participation in the FGFA project is going smoothly with a preliminary design contract signed between India and Russia for $ 295 million. The specific details of the Indian components that will go into the FGFA will be decided during the detailed design phase. HAL will be working with its Russian partner United Aircraft Corporation (UAC) in co-developing an export version of which the IAF will be the first customer.
As for the Multi Role Transport Aircraft (MTA) project, Russia’s United Aircraft Corporation (UAC) will soon set up a technical competence center to develop critical technologies for the Indo-Russian MTA project. As for HAL, it has set-up a new company, the Multi Role Transport Aircraft Limited (MTAL), as an Indo-Russian joint venture. The aircraft’s designing and the prototype will come from Russia while production will take place in India. MATL will be in charge of marketing the aircraft in the two countries as well as for export. The total project cost is estimated at $ 600 million shared between the two countries.

Defense News: DTN News - JAPAN DEFENSE NEWS: Lockheed Stealth Jet May Beat Out Boeing In Japan
*The anti-radar capabilities of Lockheed Martin's F-35 Joint Strike Fighter may give it the edge in winning a contract that may top $4 billion, analysts say 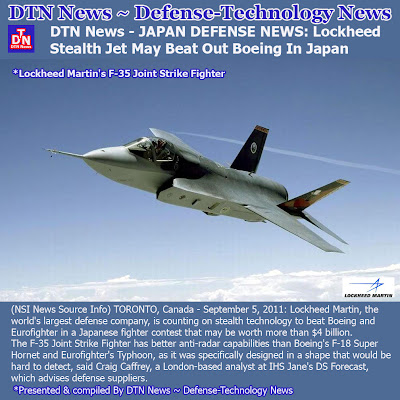 The F-35 Joint Strike Fighter has better anti-radar capabilities than Boeing's F-18 Super Hornet and Eurofighter's Typhoon, as it was specifically designed in a shape that would be hard to detect, said Craig Caffrey, a London-based analyst at IHS Jane's DS Forecast, which advises defense suppliers.
That may give the plane an edge as Japan has tried to buy stealth fighters that can be used for spying as well as combat.
"Stealth capabilities are clearly an area of focus for the Japanese," Caffrey said. "It's a key advantage for the F-35 over the rest of the competition."
Japan will accept bids this month to supply about 40 fighters as it bolsters air defenses to counter military developments in China and North Korea.
The contest comes as Lockheed sheds jobs because of projected cuts in U.S. military spending, which may include a reduction in F-35 orders, and after the Bethesda, Md.-based company missed out on an $11 billion Indian order for fighters this year.
Japan likely will choose a jet by the end of the year, said a Ministry of Defense spokeswoman, who declined to be identified, citing government policy. Deliveries are due to begin in 2016.
The order is unlikely to be affected by Prime Minister Yoshihiko Noda's new government, said the spokeswoman. The new aircraft will replace Boeing F-4s, which were last assembled in Japan in 1981. Japan had 362 fighter jets as of March 31, according to the defense ministry's website.
With the world's sixth-largest defense budget, Japan is upgrading its air defenses as both Russia and China develop stealth fighters and as North Korea works on improving its ballistic missiles and developing nuclear weapons.
Japan's Self-Defense Force has relied on U.S. military hardware, and that pattern has aided Lockheed and Boeing in the current fighter contest by causing rival suppliers to sit out the competition.
Dassault Aviation, the French maker of Rafale fighters, declined to participate because it didn't want to play "the role of a stalking horse," according to spokesman Stephane Fort.
The Rafale and the Typhoon were shortlisted in April for India's contract to buy 126 fighters. Eurofighter is a venture between BAE Systems, Finmeccanica and European Aeronautic, Defence & Space.
Japan signaled its interest in stealth by trying to buy Lockheed's F-22, IHS Jane's Caffrey said. That failed because of a U.S. export ban.
The Super Hornet and Typhoon have features that reduce their radar visibility to a lesser extent than the F-35, which was designed with a greater focus on hitting targets on the ground, he said.
A handicap for Lockheed may be that development phase for the F-35 has been extended by four years to 2016. Japan may want aircraft sooner because 18 of its F-2s were damaged by the March earthquake and tsunami, said Richard Aboulafia, vice president at Teal Group, a Fairfax, Va.-based consultant.
"The F-35 is the leader in Japan, but with a big caveat," Aboulafia said. The tsunami "has raised the prospect of an earlier buy," which may favor Boeing, he said.