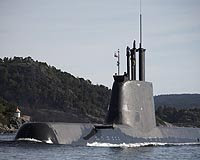 Berlin (UPI) Jun 21, 2009 Germany has generally agreed to export three submarines to Pakistan, but the sale is being delayed because of the country's political instability.
For Germany, it's an economically promising but politically risky deal: the sale of three U-214 submarines built by German ThyssenKrupp Marine Systems to Pakistan for an estimated $2 billion.
In 2006 the German government gave its general approval after Pakistan and the company requested the sale. Berlin even granted federal export credit guarantees worth nearly $1.4 billion.
That was before Pakistan became infested with al-Qaida and Taliban insurgents who went on to destabilize the government and launch attacks into neighboring Afghanistan. Pakistan's political instability has caused Germany to delay the deal.
Contract negotiations have been dragging on for years. A delivery of the three subs to Pakistan would require the approval from Germany's national security council, and it has repeatedly postponed a decision on the deal. But that doesn't mean the sale is off the table: The Frankfurter Allgemeine Zeitung newspaper reports negotiations are still ongoing.
Pakistan's defense minister recently visited Berlin and a top Pakistani general will arrive in the German capital next week -- it's likely that the Siemens-engine-powered U-214 subs, which are able to run underwater at reduced speeds for up to three weeks, were and will be on the discussion agenda.
Observers say a final decision on the deal won't be made until shortly after the German federal elections in late September. The period in between two governments is often used to push through politically controversial deals.
Several German lawmakers oppose the sale, mainly because of Pakistan's instability and the region's overall volatility.
Berlin says it doesn't sell arms into politically unstable countries, but numbers prove otherwise.
German companies in 2007 sold weapons for $221 million to Pakistan, according to a government report.
Globally, Germany proves a successful export of high-tech weapons and weapons parts. According to the Stockholm International Peace Research Institute, Germany exported conventional weapons -- such as submarines, tanks or helicopters -- worth some $12 billion between 2004 and 2008. (Small arms and weapons parts amount to roughly the same amount.)
Compared with 1999-2003, German arms exports increased by 70 percent, SIPRI says. The country is now No. 3 in the global market, trumped only by Russia and the United States, which leads the world in arms exports.
Posted by DEFENSE NEWS at 8:46:00 AM No comments: 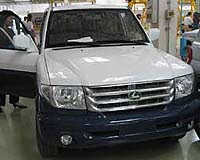 Beijing (AFP) June 21, 2009China denied it was discriminating against foreign manufacturers Thursday, after issuing a document ordering local governments to favour domestic companies when purchasing goods.
"This document is aimed at maintaining a fair market environment for competition, which is also in line with China's law on government procurement," foreign ministry spokesman Qin Gang told reporters.
"Therefore, there is no such thing as discrimination against foreign enterprises or products."
Earlier this month, the National Development and Reform Commission, China's economic planning agency, ordered local governments to buy Chinese goods when carrying out projects linked to the nation's massive economic stimulus package.
"For government procurement, apart from cases where products and services are not available domestically or cannot be acquired on reasonable commercial terms, domestic products should be purchased," the document said.
The call for preferential treatment for Chinese firms follows claims by local businesses that a large part of Beijing's stimulus money has gone into foreign pockets, state media said.
Qin said the order was fully in line with the law on procurement which was issued in 2002.
"The Chinese government unswervingly has adopted an openness policy based on mutual benefit and a win-win outcome and resolutely opposes all forms of trade and investment
protectionism," he insisted.
China unveiled a four-trillion-yuan (580-billion-dollar) package in late 2008 aimed at revitalising the economy, which has been hit by the global meltdown.
According to the China Daily, there are no figures available on the value or proportion of foreign products purchased under the stimulus budget.
Posted by DEFENSE NEWS at 8:39:00 AM No comments: 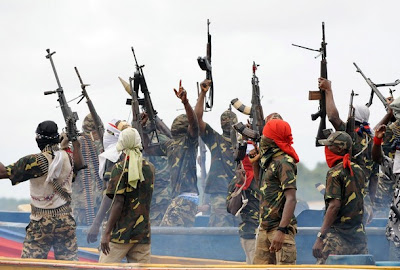 The Movement for the Emancipation of the Niger Delta (MEND) said it had attacked Shell's pipelines at Adamakiri and at Kula, both in Rivers, early on Sunday, as part of a series of strikes it has dubbed "Hurricane Piper Alpha."
"Piper Alpha unleashed its fury in Rivers state today... leaving in its wake two battered oil installations," the group said in a statement.
There was no immediate confirmation from Shell or from the Nigerian military.
The attacks are the first to strike Rivers state, the easternmost of the three main states in the Niger Delta, since the militants launched their latest campaign of sabotage following a military offensive in the western delta last month.
Persistent acts of sabotage by MEND over the past three years have cut oil output in the OPEC member, the world's eighth biggest crude oil exporter, to less than two thirds of its installed capacity of 3 million barrels per day (bpd).
The group first burst onto the scene in late 2005, knocking out more than a quarter of Nigeria's oil output -- then around 2.4 million bpd -- in a matter of weeks.
But the latest campaign has nibbled further at production.
Italian energy firm Agip said on Friday an attack claimed by MEND on one of its oil and gas pipelines in Bayelsa state had halted production of around 33,000 barrels of oil and 2 million cubic metres of gas per day.
Shell said on Thursday some oil production had been halted following an attack on the Trans Ramos pipeline late on Wednesday at Aghoro-2 community in Bayelsa.
U.S. energy firm Chevron shut down its operations around Delta state after MEND's first pipeline attack in its latest campaign on May 24, halting around 100,000 barrels per day (bpd) of output.
MEND has dubbed its offensive "Hurricane Piper Alpha" after the North Sea oil platform that blew up in July 1998, the worst ever offshore oil disaster, and warned that it might attack deep-water facilities off the Nigerian coast.
Security sources say some oil firms have been removing non-essential personnel from some offshore sites.
(Editing by Angus MacSwan)
Posted by DEFENSE NEWS at 3:21:00 AM No comments: