Source: DTN News - - This article compiled by Roger Smith from reliable sources including FT.com By Roula Khalaf in London and James Drummond in Abu Dhabi
(NSI News Source Info) TORONTO, Canada - September 21, 2010: The Arab states of the Gulf have embarked on one of the largest re-armament exercises in peacetime 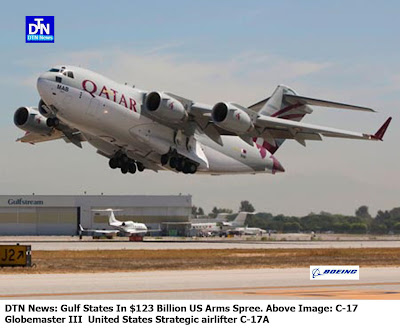 history, ordering US weapons worth some $123bn as they seek to counter Iran’s military power. A package of US arms worth more than $67bn for Saudi Arabia accounts for the largest single component of this military build-up, providing a huge boost to the American defence industry.
The first phase of this agreement – soon to go before the US Congress for approval – is estimated at about $30bn.
Anthony Cordesman, from the Centre for Strategic and International Studies in Washington, said that the US was aiming to achieve a “new post-Iraq war security structure that can secure the flow of energy exports to the global economy”.
The arms sales would “reinforce the level of regional deterrence and help reduce the size of forces the US must deploy in the region”.
The purchase of new weaponry comes at a time when many countries in the Middle East, home to two-thirds of the world’s proven oil reserves, are alarmed by Iran’s nuclear ambitions.
They also fear that any Israeli or US military strike on Iranian nuclear facilities could provoke retaliation against them, or disrupt the flow of oil through the Strait of Hormuz.
Saudi Arabia will receive 85 new F-15 jet fighters and another 70 will be upgraded. Boeing will be the principal supplier, allowing the US company to strengthen its ability to manufacture advanced military jets, an area where it has been slipping under competitive pressure. A successor agreement is expected to provide for the upgrade of radar and missile defence systems and an ambitious modernisation of the Saudi Navy’s eastern fleet.
“The Saudi aim is to send a message especially to the Iranians – that we have complete aerial superiority over them,” said a Saudi defence analyst.
Other US allies in the Gulf are also involved. Theodore Karasik, from the Institute for Near East and Gulf Military Analysis in Dubai, said that the United Arab Emirates had signed contracts to buy military equipment worth $35bn-$40bn.
The UAE has received clearance to buy Thaad, a high altitude missile defence system being developed by Lockheed Martin. The UAE and Kuwait have each signed contracts for upgrades to their Patriot missile defence systems, developed by Raytheon, which cover lower levels of an air defence “curtain”.
Elsewhere, Oman is expected to spend $12bn and Kuwait $7bn in the period until the end of 2014 on replacing and upgrading warplanes and new command and control systems, according to Blenheim Capital Partners, a consultancy that arranges offset deals. Oman’s package will include 18 new F-16 jet fighters and upgrades for another 12. This will benefit Lockheed Martin, reinforcing its position as the leading US manufacturer of warplanes.
The total value of all US arms deals with Saudi Arabia, the UAE, Oman and Kuwait is estimated at $122.88bn over the next four years.
Grant Rogan, Blenheim’s chief executive, said that Middle Eastern and south-east Asian countries had traditionally bought arms on a one-off basis. But now they were replacing western Europeans as some of the biggest regular arms purchasers. “They are the big buyers,” he said.
*Link to this article - "Gulf States In $123 Billion US Arms Spree - FT.com By Roula Khalaf in London and James Drummond in Abu Dhabi"
*This article is being posted from Toronto, Canada By DTN News ~ Defense-Technology News, contact: dtnnews@ymail.com
EDITOR’S CHOICE
*Iran fear triggers arms surge - Sep-20
*Opinion: US Mideast arms deal aims to stop attack on Iran - Sep-20
*Saudis question logic of US arms deal - Sep-20
*In depth: Iran - Jul-22
*Iran sanctions buy time for diplomacy - Sep-20
*Iran hints at attempt to ease US tensions - Sep-20
Posted by DEFENSE NEWS at 5:17:00 AM No comments: