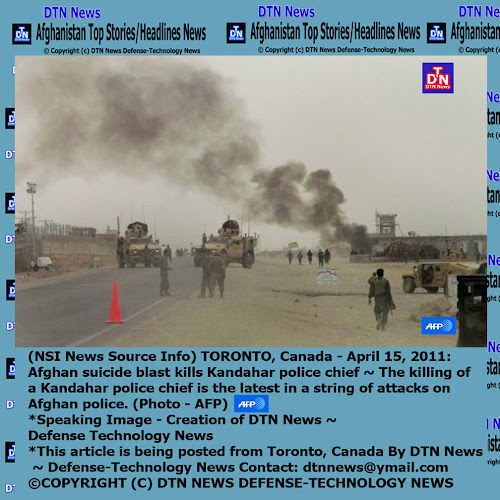 KANDAHAR, Afghanistan — The police chief in the key southern Afghan province of Kandahar was killed by a Taliban suicide bomber Friday along with two of his bodyguards, officials said.

The killings at the police headquarters in Kandahar city are a serious blow to security in the province, seen as the birthplace of the Taliban and a pivotal battleground in the near ten-year war against the Islamist militants.

They are the latest in a wave of insurgent attacks against the 120,000-strong Afghan police, who are due to take on more responsibility for security ahead of the planned withdrawal of foreign combat troops in 2014.

"A suicide attacker detonated himself at the police headquarters. The police chief has been martyred," provincial spokesman Zalmai Ayubi said.

A spokesman for the interior ministry in Kabul, Zemarai Bashary, confirmed that the police chief, Khan Mohammad Mujahid, had died and said his two bodyguards were also killed.

"Two of his bodyguards were martyred in the suicide attack and three police personnel were also injured," he said.

Mujahid, a former mujahedeen fighter against the Soviet invasion of Afghanistan in the 1980s, only took up the job in October and had apparently survived two previous attempts on his life.

At least one of his predecessors was also assassinated by the Taliban, in 2009.

The killing is the second claimed by the Taliban of a provincial police chief in just over a month -- in March, the top officer in the northern province of Kunduz was assassinated.

Taliban spokesman Yusuf Ahmadi said one of its members was behind the latest attack.

"He had disguised himself as a policeman and shot the police chief with his pistol, hugged him and then detonated himself," he said.

Afghan President Hamid Karzai condemned the killings and insisted that insurgents "would not achieve their evil goals by such terrorist attacks", while the US commander of foreign troops in Afghanistan, General David Petraeus, also spoke against them.

In chaotic scenes in Kandahar, ambulances and military vehicles rushed to the blast area while local shopkeepers hastily closed up businesses and streets were largely empty of residents.

Pools of blood and human body parts were scattered at the scene of the attack inside the police compound, an AFP reporter said.

The blast took place in the same building where, in February, 19 people including 15 police and an intelligence agent were killed in a series of assaults by the Taliban.

Last week, six Afghan security personnel were killed as Taliban gunmen detonated a bomb hidden in an ambulance during an attack on a police centre near Kandahar city, where a new police headquarters is being built.

A spokesman for NATO's International Security Assistance Force (ISAF) said that no international troops were caught up in Friday's attack.

There are around 130,000 international troops in Afghanistan, two-thirds of them from the United States, battling the Taliban and other insurgents.

Limited withdrawals from seven relatively peaceful areas, only one of which is in southern Afghanistan, are due to start in July ahead of the planned end of foreign combat operations in 2014.

But US Secretary of State Hillary Clinton warned at a NATO foreign ministers meeting in Berlin on Thursday that nations involved in Afghanistan should not rush to exit due to "political expediency and short-term thinking".

"We have to steel ourselves and our publics for the possibility that the Taliban will resort to the most destructive and sensational attacks we have seen," she said.

Two French nationals suspected of belonging to an international terror group have been arrested by Pakistan's security services, French and Pakistani sources said on Thursday.

Three Afghan policemen were killed on Thursday when Taliban militants struck at a police training centre in the second suicide attack to hit eastern Afghanistan in as many days.

A suicide bomber killed 10 people in an attack on Wednesday on peace talks between tribal elders in Afghanistan's eastern Kunar province, a volatile area where insurgents have gained ground in recent months.

Pakistan asks US to scale back activity in country

Pakistan has asked the US to scale down drone attacks in its sensitive regions and to decrease the number of special forces trainers and CIA personnel in the country.

A drone missile strike killed a US Marine and a Navy corpsman last week by mistake, in what appeared to be the first instance US troops had been killed in a "friendly fire" incident involving an unmanned aircraft.

In a sophisticated attack, at least one suicide bomber entered the police headquarters in Kandahar on Friday and detonated himself, killing a police chief and two policemen, officials said.

By THOM SHANKER and CHRISTOPHER DREW

Despite saving billions of dollars already by canceling weapons programs and identifying inefficiencies, the Pentagon is under pressure from the president to cut another $400 billion.

A Motley Consensus on the Afghanistan Line Item

The war in Afghanistan has made for some unusual bedfellows, especially when it comes to how to pay for it.

A suicide bomber killed one of the most senior local figures in Kunar Province and 11 other people, including five schoolboys.

April 13, 2011
MORE ON AFGHANISTAN AND: TERRORISM, BOMBS AND EXPLOSIVES,TALIBAN

Toronto Star - Paul Watson - ‎3 hours ago‎
Khan Mohammad Mujaheed, the police chief of Kandahar, is seen in a photo from March 10, 2011. He was killed by a suicide bomber Friday. US Navy/Photo by Haraz N. Ghanbari/US Navy via Getty Images By Paul Watson Star Columnist For a man squarely in the ...

Voice of America - ‎8 hours ago‎
Officials say a suicide bomber has killed the police chief of Afghanistan's southern Kandahar province in an attack on the region's police headquarters. A provincial spokesman says the bomber was dressed as a police officer and detonated his explosives ...

National Post (blog) - ‎10 hours ago‎
As we drove from Kandahar Air Field into Kandahar city, I asked my local Afghan fixer if anything there had improved since my last visit in September. “We now have electricity,” he said. This was good news. For years, Kandaharis suffered from sporadic ...

RadioFreeEurope/RadioLiberty - ‎10 hours ago‎
The police chief of Afghanistan's southern province of Kandahar was killed today in a suicide attack at the city's police headquarters. The deputy police chief of Kandahar, Shir Shah, said the attack on his boss, Khan Mohammad Mujahid, ...

Jerusalem Post - ‎11 hours ago‎
By REUTERS KANDAHAR, Afghanistan - A suicide bomber on Friday killed the police chief of Afghanistan's southern Kandahar province, a stronghold of the Taliban-led insurgency, after penetrating tight defences at the police headquarters, government and ...

BBC News - ‎11 hours ago‎
The police chief of Afghanistan's southern Kandahar province has died in a suicide attack on his headquarters. Khan Mohammad Mujahid was killed and two other police officers were injured in the blast, officials say. A suicide bomber managed to ...

Aljazeera.net - ‎11 hours ago‎
Suicide bomber claims lives of Kandahar police chief and at least two other policemen in attack on police headquarters. Khan Mohammad Mujahid, the police chief of Kandahar in southern Afghanistan, has been killed in a suicide attack at the police ...

AFP - Nasrat Shoaib - ‎11 hours ago‎
KANDAHAR, Afghanistan — The police chief in the key southern Afghan province of Kandahar was killed by a Taliban suicide bomber Friday along with two of his bodyguards, officials said. The killings at the police headquarters in Kandahar city are a ...

MiamiHerald.com - ‎Apr 14, 2011‎
By HASHIM SHUKOOR KABUL, Afghanistan -- Another suspected Taliban suicide attacker struck in Afghanistan's eastern provinces Thursday, this time claiming the lives of three police officers at a training center that US and Afghan officials set up in ...

BBC News - ‎Apr 14, 2011‎
At least three Afghan policemen were killed when suicide bombers attacked a police training centre in the east of the country, officials say. Police said two bombers also died in the raid on the base in Paktia province where dozens of men were being ...

3 POLICE KILLED IN ATTACK IN AFGHANISTAN

Inquirer.net - ‎Apr 13, 2011‎
KABUL—Three Afghan policemen and one civilian were wounded Thursday when a suicide car bomber blew up his vehicle outside a government building near the capital Kabul. The attack targeted the office of the senior official in the volatile Musayi ...

Boston Globe - ‎Apr 13, 2011‎
KABUL — A suicide bomber detonated himself yesterday as tribal elders left a meeting in a remote mountain village in eastern Afghanistan, killing one of the most senior local figures and 11 other people, including five children. ...

Hindustan Times - ‎Apr 13, 2011‎
A suicide attack ripped through a gathering of elders in eastern Afghanistan on Wednesday, killing 10 people including five children, officials said. The bomber struck in Kunar, one of Afghanistan's most restive provinces, where Taliban-led militants ...