(NSI News Source Info) FAIRFIELD, Conn. - July 22, 2010: GE Aviation along with its joint venture companies, CFM International and the Engine Alliance, have amassed engine and services orders valued at more than $16 billion (USD) at the 2010 Farnborough Air Show.
“GE Aviation is excited with the tremendous amount of engine and services orders that received at the 2010 Farnborough Air Show,” said David Joyce, president and chief executive office of GE Aviation. “The level of activity at the show demonstrates that the aviation industry is beginning to emerge from the economic downturn.”
GE Aviation and its joint companies garnered $11 billion in engine orders and $5 billion in long-term, high-margin service agreements. Highlights include:
At Farnborough, GE Aviation launched its new myEnginesTM digital services, a suite of digital applications to help customers better manage their engine fleets and improve productivity. This is the latest announcement in GE’s growing $4 billion-per-year software and solutions business. LAN Airlines is the launch customer for myEngines digital services, which will cover LAN's entire fleet of CF6-80C2, GE90-115B, CFM56-5B and –5C engines.
GE Aviation also announced its OnPointSM Fuel & Carbon Solutions was added as the newest product in GE’s ecomagination portfolio. OnPoint Fuel and Carbon Solutions could help GE Aviation’s customers reduce their fuel spend by an average of three percent.
CFM International announced Czech Airlines (CSA), the flag carrier of the Czech Republic, achieved TRUEngine status for 22 CFM56-3 and 31 CFM-5B engines powering its fleet of Boeing 737-400/-500 and Airbus A319/A320/A321 single-aisle, respectively.
CFM International is a 50/50 joint company between Snecma (Safran group) and GE. The Engine Alliance is a 50/50 joint between GE and Pratt & Whitney.
GE Aviation, an operating unit of GE (NYSE: GE - News), is a world-leading provider of jet and turboprop engines, components and integrated systems for commercial, military, business and general aviation aircraft. GE Aviation has a global service network to support these offerings. For more information, visit us at www.ge.com/aviation.
Posted by DEFENSE NEWS at 9:26:00 PM No comments: 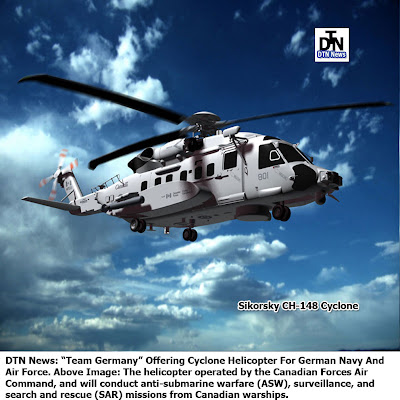 onsisting of several partnership agreements that will work together to introduce the Cyclone multi-role helicopter into Germany. The team collectively is offering a comprehensive solution for the requirements of the German Navy and Air Force. Sikorsky Aircraft is a subsidiary of United Technologies Corp. (NYSE:UTX).
In June, Sikorsky finalized partnership agreements with Tier One German and European defence companies, Rheinmetall Defence Group, RUAG, MTU Aero Engines (MTU), and ZFL.
“Together with General Dynamics Canada, our international integrated mission systems partner, the team is continuing to identify and select German companies to partner with on this initiative,” said Joseph Gigantelli, Sikorsky Vice President, European Sales. “We believe we have a strong team and an equally strong offering of products and services for the German armed forces. We intend to provide Germany with the best technology that is available in-country and from around the world, and in doing so, provide a technologically superior aircraft.”
The Cyclone helicopter provides multi-mission capabilities including anti-submarine warfare, anti-surface warfare, and search and rescue. The aircraft is a derivative of the S-92® helicopter, which gets its basic design from the BLACK HAWK helicopter, a proven, rugged and durable aircraft.
Among the features of the Cyclone aircraft are enhanced rotor and drive designs, bird strike protection, a flaw- and damage-tolerant design, and protection from turbine bursts. In addition, the aircraft have crashworthy seats, crash-resistant fuel systems, and High Intensity Radio Frequency (HIRF) and lightning protection.
Sikorsky has been growing its European business activities over the last several years. In 2007, PZL Mielec in Poland became a Sikorsky company and is the future manufacturer of the S-70iTM BLACK HAWK helicopter. Sikorsky also is actively exploring business opportunities for strategic European partners for component manufacturing and service centers for the entire Sikorsky product line.
Sikorsky Aircraft Corp., based in Stratford, Conn., is a world leader in aircraft design, manufacture and service. United Technologies Corp., based in Hartford, Conn., provides a broad range of high-technology products and support services to the aerospace and building systems industries.
Posted by DEFENSE NEWS at 6:33:00 AM No comments: 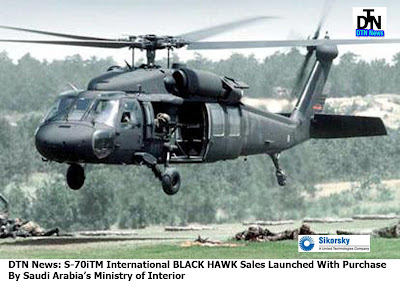 a’s Ministry of Interior (MOI) has become the launch customer for the new S-70iTM helicopter. The MOI signed a contract to acquire three of the latest model aircraft in the celebrated BLACK HAWK helicopter line, and has taken options to acquire 12 additional S-70i helicopters. Sikorsky is a subsidiary of United Technologies Corp. (NYSE:UTX).
Delivery of the first helicopter is scheduled for early 2011. The aircraft will perform transport, border protection and other missions.
“We are proud to announce the sales launch of the S-70i international BLACK HAWK to our valued customer, Saudi Arabia’s Ministry of Interior. The S-70i helicopter continues the legendary BLACK HAWK history of providing safe and reliable transportation for militaries around the world with exceptional value,” said Michael Ambrose, Vice President of international military programs at Sikorsky. “Sikorsky has a long and honored history with the Kingdom of Saudi Arabia, and the S-70i is the next exciting chapter in our relationship. We also look forward to further expanding this relationship in the years to come.”
The new S-70iTM BLACK HAWK helicopter was designed for the international marketplace. The helicopter incorporates the latest technology with advanced features such as a fully integrated digital cockpit with a dual digital automatic flight control system and coupled flight director. It also features an active vibration control system that will smooth the overall ride of the aircraft. The dual GPS/INS system with digital map provides accurate and redundant navigation for the most demanding of tactical environments. Customers around the world will benefit from the S-70i helicopter's modern, robust aircraft configuration and ability to leverage existing interoperability with Sikorsky’s worldwide fleet of BLACK HAWK helicopters.
The new S-70i international variant utilizes a global supply chain and is the first BLACK HAWK helicopter ever assembled in Europe. PZL Mielec, a Sikorsky Aircraft company in Poland, has been established as the hub of the S-70i program for international customers. The successful first flight of the S-70i aircraft took place on July 1 at the Sikorsky Development Flight Center in West Palm Beach, Florida.
Sikorsky Aircraft Corp., based in Stratford, Conn., USA, is a world leader in helicopter design, manufacture and service. United Technologies Corp., based in Hartford, Conn., USA, provides a broad range of high technology products and support services to the aerospace and building systems industries.
This release contains forward looking statements that involve uncertainties and that could change, including the development of new technologies and execution of contract terms. These uncertainties could affect investment decisions and outcomes.
Posted by DEFENSE NEWS at 6:31:00 AM No comments:

DTN News: Russia's Moskva Missile Cruiser Sets Off To Its Naval Base In Ukraine 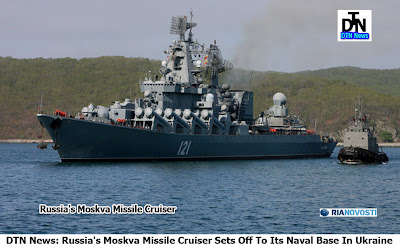 2010: The flagship of the Black Sea fleet, the Moskva missile cruiser, has set off from the port of Vladivostok in Russia's Far East to its home port in Ukraine's Sevastopol, a Navy spokesman said on Wednesday.
The Moskva missile cruiser was participating in Russia's Vostok 2010 military drills jointly with the flagship of the Northern Fleet, the Pyotr Veliky nuclear-powered guided-missile cruiser, and the flagship of the Pacific Fleet, the Varyag guided-missile cruiser.
"After a short rest in Vladivostok, the Moskva set off for the Black Sea to its home base in the port of Sevastopol. It will have to pass across the Pacific, Indian and Atlantic oceans," the spokesman said.
Russia's Black Sea Fleet is stationed in Ukraine's port of Sevastopol under a lease agreement. Moscow and Kiev signed earlier in the year a deal extending the lease on the fleet's base in Sevastopol for 25 years after the current lease expires in 2017.
Vostok-2010 exercises in Siberia and the country's Far East started on June 29 and ended on July 8. They involved 20,000 troops, up to 2,500 pieces of military hardware, 70 warplanes and 30 warships.
During the exercises, warships of the three Russian fleets conducted live firing at naval and aerial drones and practiced combat interoperability and repelling simulated attacks by hostile submarines and aircraft.
Russia holds Vostok strategic command-and-staff drills every two years.
Related News
*Russian Navy participates in Vostok-2010 military exercises
*Vostok-2010 games: A test of Russia's new army
*First stage of Russia’s Vostok 2010 military drills ends
*Russia's Medvedev oversees naval phase of Vostok-2010 military drills
Multimedia
*Guided missile cruiser Moskva arrives in Russia’s Far East
*Russian naval infantry at Vostok-2010 military exercises
Posted by DEFENSE NEWS at 6:29:00 AM No comments: