AAI Corp., doing business as Textron Systems, Hunt Valley, Maryland, was awarded a $97,109,000 modification (P00004) to contract W58RGZ-15-C-0047 for the Shadow tactical unmanned aircraft system, tactical data link retrofit for full-rate production VII.  Work will be performed in Hunt Valley, Maryland, with an estimated completion date of Oct. 31, 2018.  Fiscal 2015 other procurement funds in the amount of $97,109,000 were obligated at the time of the award.  Army Contracting Command, Redstone Arsenal, Alabama, is the contracting activity.

Weeks Marine Inc., Covington, Kentucky, was awarded a $10,642,250 firm-fixed-price contract with options to rent one fully operated cutterhead dredge with 30-inch inside diameter pump discharge with submerged pump, attendant plant and discharge pipeline as specified.  Bids were solicited via the Internet with one received. Work will be performed in New Orleans, Louisiana, with an estimated completion date of July 8, 2016.  Fiscal 2014 and 2016 other procurement funds in the amount of $10,642,250 were obligated at the time of the award.  Army Corps of Engineers, New Orleans, Louisiana, is the contracting activity (W912P8-16-C-0016).

Travis Association for the Blind, Austin, Texas, was awarded an $8,856,391 modification (0005) to contract W56HZV-13-D-0009 to clean and repair unserviceable, but economically repairable, organizational clothing and individual equipment.  Work will be performed in Austin, Texas, with an estimated completion date of Jan. 21, 2017.  Fiscal 2016 operations and maintenance (Army) funds in the amount of $8,856,391 were obligated at the time of the award.  Army is the contracting activity.

Leidos Inc., Reston, Virginia, has been awarded a $21,079,949 cost-plus-fixed-fee contract for critical analysis and simulation efforts. Contractor will provide advanced technology exploration, development and research into optical beam control in the presence of atmospheric turbulence to develop, simulate, analyze, and characterize beam control systems for laser propagation and laser communication. Work will be performed at Kirtland Air Force Base, New Mexico, and is expected to be complete by Jan. 23, 2021. This award is the result of a competitive acquisition with one offer received. Fiscal 2015 and 2016 research, development, test and evaluation funds in the amount of $950,962 are being obligated at the time of award. Air Force Research Laboratory, Kirtland Air Force Base, New Mexico, is the contracting activity (FA9451-16-C-0048).

M-1 Support Services LP; Denton, Texas, has been awarded an estimated $12,028,752 modification (P00008) to exercise an option to previously awarded contract FA3002-15-C-0004. Contractor will provide aircrew and maintenance services for the CV-22 aircraft, UH-1N and HH-60G helicopters, associated engines, and mission support equipment of the 58th Maintenance Group. Work will be performed at Kirtland Air Force Base, New Mexico, and is expected to be complete Sept. 30, 2016. No funds were obligated at time of award. The Air Force Installation Contracting Agency, Joint Base San Antonio-Randolph, Texas, is the contracting activity. (Awarded on Sept. 16, 2015)

Bethel-Webcor JV-1,* Anchorage, Alaska, is being awarded $14,989,000 for firm-fixed-price task order 0005 under a previously awarded multiple award construction contract (N62478-14-D-4001) for repairs to Buildings 1604 and 1632 at Marine Corps Base Hawaii.  Work includes miscellaneous structural repairs; replacement of deteriorated doors and windows; exterior and interior painting; repairs to exhaust ventilation system and air conditioning systems; repairs to hot water heating system, installation of fire suppression system and repairs to fire alarm system; and electrical repairs to include replacing all light fixtures, main electrical distribution panel, and wiring to meet arc fault protection requirements.   Work will be performed in Oahu, Hawaii, and is expected to be completed by September 2017.  Fiscal 2016 operation and maintenance (Marine Corps) contract funds in the amount of $14,989,000 are obligated on this award and will expire at the end of the current fiscal year.  Five proposals were received for this task order.  The Naval Facilities Engineering Command, Hawaii, Joint Base Pearl Harbor-Hickam, Hawaii, is the contracting activity.

Northrop Grumman Corp., Aerospace Systems, San Diego, California, is being awarded an $8,171,523 modification P00002 to a previously issued cost-plus-fixed-fee contract (N00019-16-C-0023) to exercise options for engines, program related engineering services, integrated logistics, and training in support of the MQ-8 Fire Scout unmanned aircraft system.  Work will be performed in San Diego, California (90 percent); and Point Mugu, California (10 percent), and is expected to be completed in December 2016.  Fiscal 2016 operation and maintenance (Navy) funds in the amount of $8,171,523 are being obligated at time of award; all of which will expire at the end of the current fiscal year.  The Naval Air Systems Command, Patuxent River, Maryland, is the contracting activity. 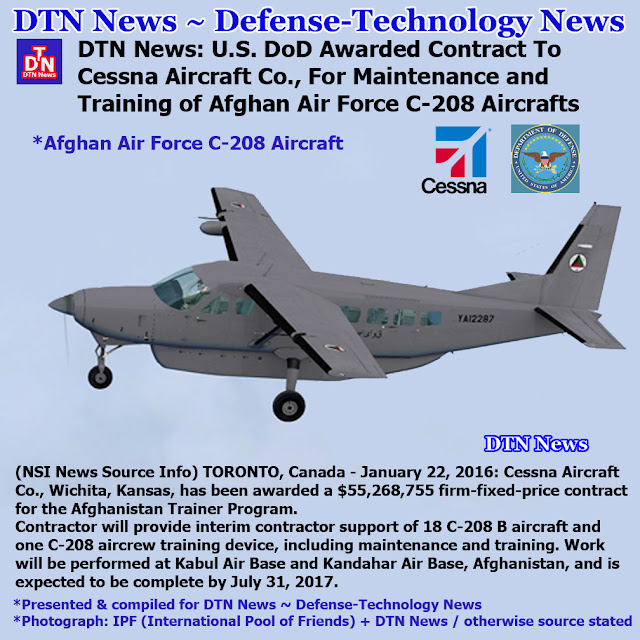 Contractor will provide interim contractor support of 18 C-208 B aircraft and one C-208 aircrew training device, including maintenance and training. Work will be performed at Kabul Air Base and Kandahar Air Base, Afghanistan, and is expected to be complete by July 31, 2017.

This contract is 100 percent foreign military sales to the country of Afghanistan. This award is the result of a sole-source acquisition.

Fiscal 2015 Afghanistan Security Forces funds in the amount of $18,251,442 are being obligated at the time of award.