Defense News: DTN News - INDIA NEWS: Rahul Gandhi Arrested By UP Police And Released
**Most Indian politician are corrupt and siphoned out $125 billion in eight years: Report
**Bigwigs among the Indians having their accounts in Swiss banks: WikiLeaks 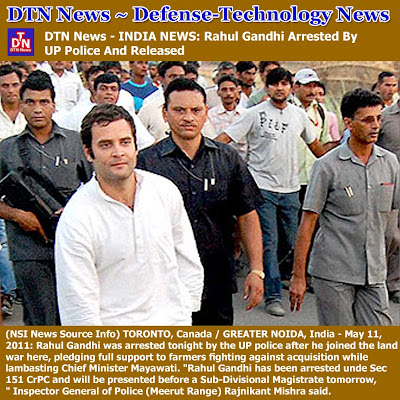 Gandhi was taken away from the dharna site in Bhatta Parsaul Village in a grey Tata Safari to an undisclosed location.

The Amethi MP smiled to the large battery of media before getting into the vehicle along with AICC General Secretary Digvijay Singh and Firozabad MP Raj Babbar.

"We will continue to support the farmers agitation," Singh said as he was pushed into the vehicle.

"UP government's action in arresting Rahul Gandhi proves that Mayawati is digging her own grave," Dwivedi said.

"If any sense of justice is left in the government, judicial inquiry is the minimum that the state government should order immediately," he said.

Sneaking into Batta Parsaul village, the epicentre of the agitation in Western Uttar Pradesh, in the wee hours riding pillion on a motorcyle, Gandhi sat with the agitating farmers throughout the day in scorching heat to emphathise with their cause and women who lost their men.

"I feel ashamed to call myself Indian after seeing what has happened here. The (state) government here has unleashed atrocities on its own people," he told the farmers.

Even as he sat on a dharna, a war of words erupted, with BJP terming it as a "drama" and wanting to know why the UPA government was still not acting on his earlier promise of bringing Land Acquisition Bill in Parliament.

The Congress, on its part, said it was keen to get on early passage of the bill in Parliament.

Gandhi said he associated with them as they were demanding their "right" and there was "nothing wrong" in it.

"I want to tell you that I am with you till your demands are met. Till your work is not done, the Congress party will not desert you," he said to a thunderous applause from the gathering which shouted slogans hailing him.

He said an official had told him that the agitation was like "naxalism" but he had found that the farmers were peacefully making their demands.

Gandhi demanded a judicial inquiry into the exchange of fire on Saturday last between farmers and police in which two farmers and two policemen were killed.

Earlier, after reaching the village at 4 AM along with party colleague Digvijay Singh, he heard the farmers and had tea with them.

**Most Indian politician are corrupt and siphoned out $125 billion in eight years: Report
**Bigwigs among the Indians having their accounts in Swiss banks: WikiLeaks

Source: DTN News - - This article compiled by Roger Smith from reliable sources TimeNow.TV
(NSI News Source Info) TORONTO, Canada - May 11, 2011:
Kurt Volker, Former US Ambassador to NATO spoke to TIMES NOW on Wednesday (May 11) and said he does not believe that Pakistan was unaware of Al-Qaeda leader Osama bin Laden's house in Abbottabad, which was at a short distance from a military training academy. He also added that Pakistan must stop playing double games. 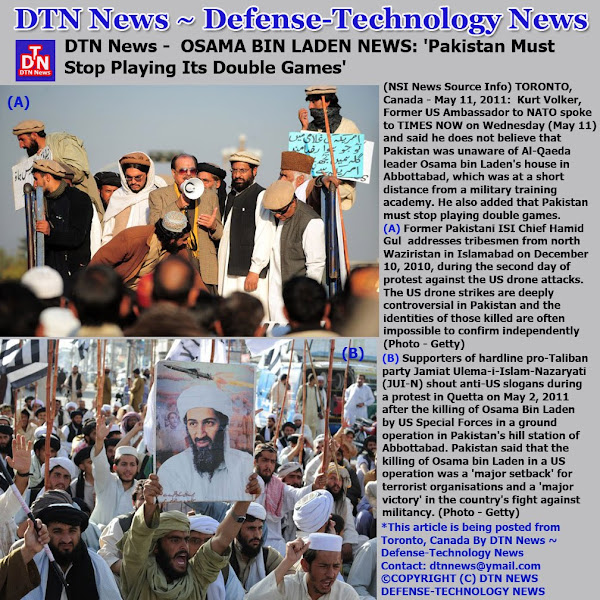 He said, "I personally don't believe that no one in Pakistani government was aware that Osama was living in a house in Abbottabad, near the military academy. May be not the President but others from the government must have been aware of it."

"Pakistan must stop this double games and decide whether it wants to help in in the fight of anti-terrorism," added Volker.

The former US Ambassador to NATO also added that Congress is thinking of cutting out military funds to Pakistan.

He said, "The Congress is meditating on the option of cutting out military funds to Pakistan if they don't take a stance in favour of the fight against terror. The intellegence co-operation also has to be mutual. "
*Link for This article compiled by Roger Smith from reliable sources
TimeNow.TV
*Speaking Image - Creation of DTN News ~ Defense Technology News
*This article is being posted from Toronto, Canada By DTN News ~ Defense-Technology News
Contact:
dtnnews@ymail.com

Source: DTN News - - This article compiled by Roger Smith from reliable sources VoA
(NSI News Source Info) TORONTO, Canada - May 11, 2011:
U.S. Secretary of State Hillary Clinton says China's effort to hold off the kind of democratic changes that are sweeping the Middle East is a "fool's errand" that is doomed to failure. 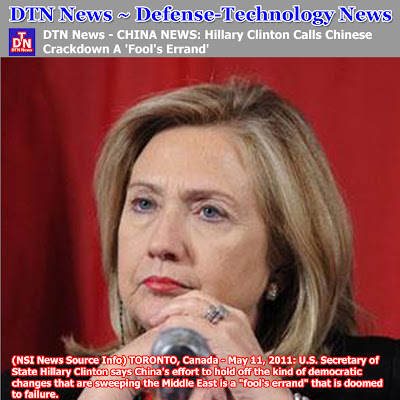 The remark came in an interview with The Atlantic magazine that was posted on the Internet Tuesday as she and other U.S. officials met senior Chinese officials in Washington.
In the interview, Clinton was asked whether Chinese officials are frightened by the popular uprisings in the Middle East.
Clinton replied that the Chinese "are worried, and they are trying to stop history," which she said "is a fool's errand (hopeless cause)." Clinton added that the Chinese cannot stop democratic reform, "but they are going to hold it off as long as possible." She also said the United States would not walk away from dealing with China because it has what she called "a deplorable human rights record."