DTN News - IRAN NEWS: Iran Scientists Produce Nuclear Fuel Rod*Special Note - DTN News would like to thanks readers and viewers for their continue support with comments and DTN News wish each entity a very happy, healthy and bright 2012, As of to-date, IRAN is in the hot spot seat being the most dangerous country on various factors, topping by producing nucleared powered weapons, Israel invented strike on nuclear facilities, sanctions by USA and EU, least Saudi involvement in Bahrain causing sectarian violence and to complete the cycle, the benefactor USA signing major arms deal with Saudi and Gulf countries creating booming arms industry during financial crisis to avert government shutdown and Obama could be elected for second terms of presidentship of the USA.*DTN News - POSSIBILITY OF FUTURE CONFLICT NEWS: Iran To Punish Saudi Arabia Brutally ~ Tuesday, March 29, 2011

Source: DTN News - - This article compiled by Roger Smith from reliable sources AP/WSJ
(NSI News Source Info) TORONTO, Canada - January 1,  2012:  Iranian scientists have produced the nation's first nuclear fuel rod, a feat of engineering the West has doubted Tehran capable of, the country's nuclear agency said Sunday. The announcement marks another step in Tehran's efforts to achieve proficiency in the entire nuclear fuel cycle—from exploring uranium ore to producing nuclear fuel--despite U.N. sanctions and measures by the U.S. and others to get it to halt aspects of its atomic work that could provide a possible pathway to weapons production. 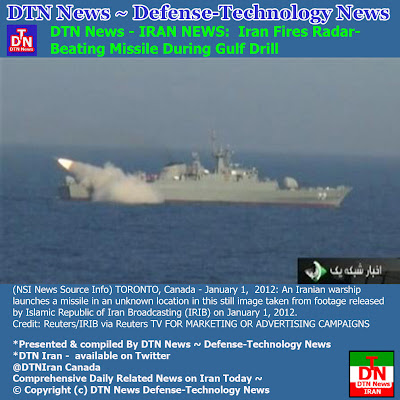 Tehran has long said it is forced to seek a way to manufacture the fuel rods on its own, since the sanctions ban it from buying them on foreign markets. Nuclear fuel rods are tubes containing pellets of enriched uranium that provide fuel for nuclear reactors.Iran's atomic energy agency's website said the first domestically made rod has already been inserted into the core of Tehran's research nuclear reactor. But it was unclear if the rod contained pellets or was inserted empty, as part of a test."Scientists and researchers at the Atomic Energy Organization of Iran have succeeded in producing and testing the first sample of a nuclear fuel rod," said the announcement.The U.S. and some of its European allies accuse Iran of using its nuclear program as a cover to develop atomic weapons. Iran denies the charge, saying the program is for peaceful purposes only and is geared toward generating electricity and producing medical radioisotopes to treat cancer patients.Although the rods are easier to make, Iran is also seeking to produce the pellets with enriched uranium. But so far it is not known whether Iranian nuclear scientists have been able to overcome the technical hurdles to do so.Tehran focused on domestic production of nuclear fuel rods and pellets in 2010, after talks with the West on a nuclear fuel swap deal ended in failure as Iran backed down on shipping a major part of its stock of enriched uranium abroad in return for fuel.The announcement on the fuel rod came just a day after Tehran proposed a new round of talks on its nuclear program with six world powers. The last round of negotiations between Iran and the five permanent members of the U.N. Security Council plus Germany was held in January in Istanbul, Turkey, but it ended in failure.The U.N. has imposed four rounds of sanctions on Tehran over its refusal to halt uranium enrichment, a process that can lead to making a nuclear weapon. Separately, the U.S. and the European Union have imposed their own tough economic and financial penalties.Separately Sunday, Iran's navy says it has test-fired a medium-range surface-to-air missile during a drill in international waters near the strategic Strait of Hormuz—the passageway for one-sixth of the world's oil supply.State TV said the missile is designed to evade radars and was developed by Iranian scientists.The report didn't provide further details or say when the missile was tested.A spokesman for the exercise, Rear Adm. Mahmoud Mousavi, says torpedoes will be used in the drill on Sunday.The exercise covers a 1,250-mile (2,000-kilometer) stretch of water beyond the Strait of Hormuz, including parts of the Indian Ocean and the Gulf of Aden.The drill could bring Iranian ships into proximity with U.S. Navy vessels that operate in the same area.
*Link for This article compiled by Roger Smith from reliable sources AP / WSJ*Speaking Image - Creation of DTN News ~ Defense Technology News *This article is being posted from Toronto, Canada By DTN News ~ Defense-Technology News Contact:dtnnews@ymail.com ©COPYRIGHT (C) DTN NEWS DEFENSE-TECHNOLOGY NEWS