Coalition efforts in northern Afghanistan have become more relevant over the past year with the addition of new capabilities from U.S. forces, the top commander for the NATO International Security Assistance Force element in the region said today. 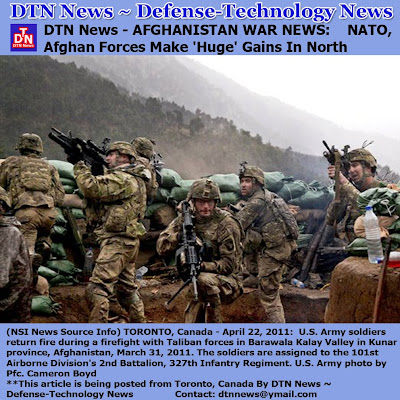 "I see a huge difference when I compare to 2006," Maj. Gen. Markus Kneip of the German army, commander of Regional Command North, told Pentagon reporters in a video news conference from his headquarters in Afghanistan. "The capabilities are far more relevant to the job, [and] the incorporation of U.S. forces is making a [positive] change."

Kneip held the same post in 2006. He commands about 12,000 troops from 16 nations, including some 6,000 U.S. soldiers, mostly from the 170th Infantry Brigade Combat Team from Baumholder, Germany, and the 4th Infantry Division's 4th Combat Aviation Brigade from Fort Carson, Colo. The addition of U.S. forces there last spring with their much-needed aviation assets improved aerial surveillance and provided attack helicopter and medical evacuation capabilities that have made a big difference, the general said.

The number of Taliban and other insurgents in the area has been reduced a great deal, Mulholland said. Twelve senior Taliban leaders are gone, he added, due to the pressure placed on them by the U.S. capabilities, as well as through combined operations with Afghan forces, which are becoming more confident with each mission.

Civil capabilities such as provincial reconstruction teams, female engagement teams and programs to re-integrate insurgents back into society also are contributing to the positive trend, he said.

"Much of the Taliban in the north have cleared out and moved to Pakistan," he said. "The difference now is that more capabilities have arrived. The populace feels good about security throughout [the north] and is pretty optimistic about the Afghans starting to take control of the government."

Mulholland said troops in the north will continue their progress by instilling confidence in the Afghan people.

"We are engaging [local leaders and Afghans] 24/7," he said. "There're a lot of positive things that are happening, because we're staying the course. We will continue to put relentless pressure on the enemy and help our partners take care of the Afghan people."

It may cost as much as $1 trillion to operate the military’s fleet ofLockheed Martin Corp. (LMT) F-35 aircraft for several decades, according to a preliminary Pentagon estimate sent to Congress. 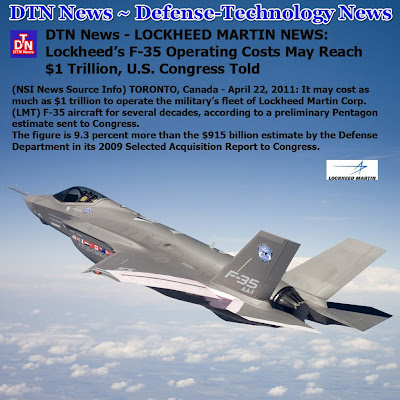 The figure is 9.3 percent more than the $915 billion estimate by the Defense Department in its 2009 Selected Acquisition Report to Congress.

The long-term cost estimate, which includes inflation, was submitted to Congress on April 15 in a report obtained by Bloomberg News. It assumes 8,000 hours of flying time for each of the 2,443 aircraft over a 30-year period. The Air Force, Navy and Marine Corps have their own variations of the aircraft, with the last in the fleet to be produced in 2035.

The estimate was calculated by the Pentagon’s independent cost analysis group based on models using historical data from other fighters, David Van Buren, Air Force service acquisition executive, said in an interview today.

“We are taking the challenge” posed by the $1 trillion estimate and “saying we’ve got to drive this down fast,” said Van Buren, who oversees F-35 management. “Do we drive down it down based on reliability projections? Do we drive it down based on technologies that we developed for the F-35” that reflect lessons learned from the F-22, he said?

For example, the latest estimate assumes that F-35 components will break more frequently than older aircraft, he said. The Pentagon is trying to develop “a more refined number,” he said.

The $1 trillion estimate is in addition to an estimated $382 billion in development and production costs.

The long-term maintenance estimates were projected based on costs incurred to support the military’s fleet of F-16s, F/A- 18s, and AV-8B Harrier jets, the Pentagon said in its report

Almost all government, analyst and media attention on the Pentagon’s biggest program has focused on cost growth and technical issues in the $54 billion systems-engineering phase.

The Pentagon’s top weapons official, without citing figures, said yesterday that the military must start focusing on controlling the long-range costs.

“It’s not too early to think of sustainment for the Joint Strike Fighter,” Undersecretary for Acquisition Ashton Carter said yesterday. “Most of the cost of our programs is in ‘having’ them, not in ‘acquiring them,” he said at the Heritage Foundation in Washington.

“We are at the point with the Joint Strike Fighter where we have wrestled with the development issues,” Carter said. “We are trying to manage down some of the cost associated with the production, and it’s not too early to look at sustainment, because the projected bills also have increased.”

The Pentagon’s Cost Analysis and Program Evaluation group is updating its $1 trillion figure for a major F-35 review next month intended to revise all of the program’s costs, including overrun estimates on the first three low-rate aircraft production and engine contracts, according to the report to Congress.

Operations and support costs, when calculated in base-year 2002 dollars, were estimated at $420 billion, according to the document.

“This is the year to focus on sustainment costs,” Vice Admiral David Venlet, the F-35 program executive officer, told reporters today. The estimates thus far “have all been predictions without any actual” data to back up the figures, he said.

The program office will begin a so-called baseline review of the sustainment cost, similar to the F-35 design and production review conducted last year, Venlet said.

The review will examine “all aspects of sustainment, from repair to transportation and illuminate the consequences” for the U.S. and the international partners, he said.

The Pentagon will look for ways to maintain the F-35 fleet with work split between military depots and performance-based logistics contracts with Lockheed, Venlet said.

To contact the reporter on this story: Tony Capaccio in Washington at +1- acapaccio@bloomberg.net.

To contact the editor responsible for this story: Mark Silva at msilva34@bloomberg.net

Bulgaria plans to spend up to 2 billion levs ($1.5 billion) on buying and maintaining military equipment by 2020, Defence Minister Anyo Angelov said on Thursday. 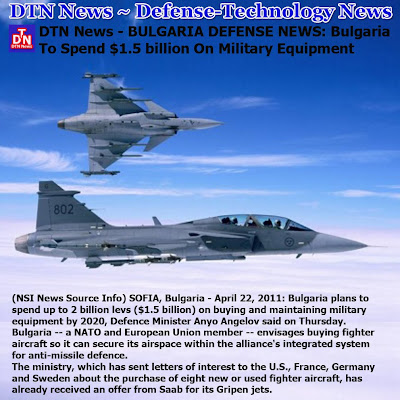 Bulgaria -- a NATO and European Union member -- envisages buying fighter aircraft so it can secure its airspace within the alliance's integrated system for anti-missile defence.

The ministry, which has sent letters of interest to the U.S., France, Germany and Sweden about the purchase of eight new or used fighter aircraft, has already received an offer from Saab for its Gripen jets.

Next week, the Defence Ministry will meet representatives of European aerospace and defence group EADS and the U.S. government, Angelov said.

It also expects to receive a response from France's Dassault Aviation and Lockheed Martin Corp.

Angelov has previously said the tender for the fighter jet purchase will take place in 2012.

The Defence Ministry plans to allocate 1.5 percent of annual gross domestic product from its budget to fund the programme, which also envisages the modernisation of its MiG-29 fighters.

Defense News: DTN News - U.S. NAVY NEWS: Boeing, US Navy Mark Delivery Of 500th Super Hornet/Growler
**All aircraft delivered on budget and ahead of schedule
**F/A-18E/F and EA-18G will operate through 2035 and beyond 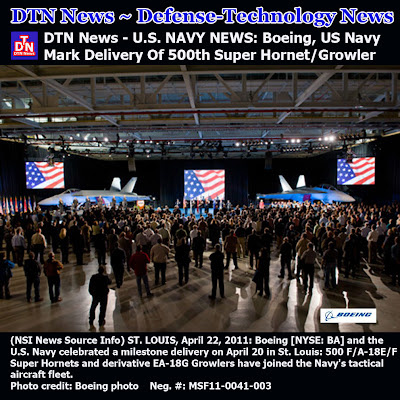 The Super Hornet Block II is the Navy's frontline strike fighter, deploying leading-edge technology and multirole strike capability around the globe. The EA-18G is now the premier airborne electronic attack platform in the Navy's arsenal and the United States' newest tactical aircraft, providing the ability to block enemy radar and electronic systems.

"The Super Hornet and Growler, both combat-deployed, have continuously increased capability for the warfighter while reducing cost for the Navy and the taxpayer," F/A-18 and EA-18 Programs Vice President Kory Mathews said at the ceremony. "Boeing has delivered every F/A-18E/F and EA-18G to the U.S. Navy on budget and ahead of schedule."

"Today is another significant milestone for a program that has by any measure exceeded expectations for cost, schedule and performance," said Capt. Mark Darrah, F/A-18 and EA-18G program manager (PMA-265). "The PMA-265/Hornet Industry Team has consistently delivered capable and reliable aircraft to our fleet customer."

The F/A-18E/F and EA-18G will operate from U.S. Navy aircraft carriers through 2035 and beyond, with the flexibility to seamlessly operate from land-based airfields.

"These aircraft were designed with extensive growth capacity, enabling evolutionary technology to be added throughout the life of the aircraft to expand capabilities and remain well ahead of changing threats," said Mathews.

Boeing is on contract to deliver 24 two-seat F/A-18F Super Hornets to the Royal Australian Air Force. The Super Hornet also is a competitor in ongoing fighter competitions in Brazil, India, Malaysia and Japan.

The Boeing EA-18G Growler is the only air combat platform that delivers full-spectrum airborne electronic attack (AEA) capability along with the targeting and self-defense capabilities derived from the Block II Super Hornet. A derivative of the two-seat F/A-18F Block II, the EA-18G's highly flexible design enables warfighters to operate either from the deck of an aircraft carrier or from land-based airfields. It is replacing the Navy's current AEA platform, the EA-6B Prowler, which has been in service since 1971. The EA-18G joined the Navy's aircraft fleet in 2008, when it was introduced to fleet training squadron VAQ-129. The EA-18G achieved Initial Operational Capability in 2009.