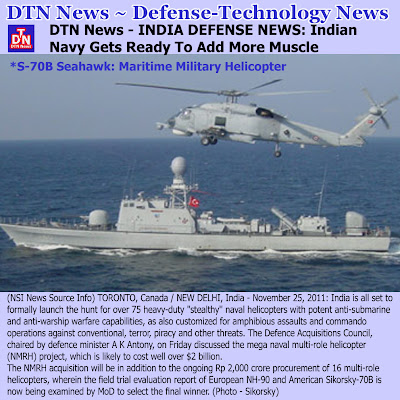 The Defence Acquisitions Council, chaired by defence minister A K Antony, on Friday discussed the mega naval multi-role helicopter (NMRH) project, which is likely to cost well over $2 billion.
"The global tender for NMRH will be issued soon. The project is likely to get even bigger at a later stage, with more such helicopters being ordered after the first 75. An initial lot will be obtained off-the-shelf from abroad, while the rest will be manufactured in India with the foreign collaborator's help,'' an MoD source said.
The NMRH acquisition will be in addition to the ongoing Rs 2,000 crore procurement of 16 multi-role helicopters, wherein the field trial evaluation report of European NH-90 and American Sikorsky-70B is now being examined by MoD to select the final winner.
Navy is also going in for new carrier-borne fighter jets, maritime patrol aircraft and drones, which together will cost around Rs 85,000 crore. These include 45 Russian MiG-29Ks for $2 billion and 12 American P-8I long-range reconnaissance aircraft for over $3 billion.
With China looming large on the radar screen, India wants to build a powerful three-dimensional Navy to protect its geostrategic interests stretching from Hormuz Strait to Malacca Strait. As part of the over Rs 300,000 crore long-term naval plans, 48 warships are already on order, as first reported by TOI.
"The NMRH, weighing 9-12.5 tonne each, will operate from the flight decks of frigates, destroyers and aircraft carriers. Five global aviation majors indicated their interest to our initial queries,'' said a source.
The new helicopters, with an operational life of over 30 years, will replace the older Sea King helicopters and meet requirements of the expanding Navy. Their "primary roles'' will include anti-submarine and anti-surface warfare, special and commando operations, and amphibious assault and troop carriage.
The "secondary roles'', in turn, will include electronic intelligence and anti-piracy, search and rescue, casualty evacuation and external cargo carrying. Navy wants the helicopters to be equipped with advanced avionics and weapons suites - including state-of-the-art-radars, light-weight torpedoes, depth charges, 70mm rockets and 20mm guns -- to "detect, identify, classify and destroy'' aerial, surface and sub-surface threats.
Incidentally, the Indian armed forces are planning the induction of over 900 helicopters over the next 15 years. They include 384 light-utility and observation, 139 medium-lift, 114 light combat, 22 heavy-duty attack, 15 heavy-lift, 12 VVIP, five maritime early-warning and, of course, 186 Dhruv advanced light helicopters.
Related Image; 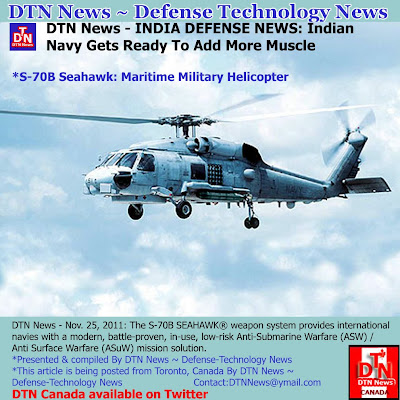 Source: DTN News - - This article compiled by Roger Smith from reliable sources Reuters
(NSI News Source Info) TORONTO, Canada - November 25, 2011: A strategic partnership agreement between India and Afghanistan would ordinarily have evoked howls of protest from Pakistan which has long regarded its western neighbour as part of its sphere of influence. Islamabad has, in the past, made no secret of its displeasure at India’s role in Afghanistan including a$2 billion aid effort that has won it goodwill among the Afghan people, but which Pakistan sees as New Delhi’s way to expand influence. 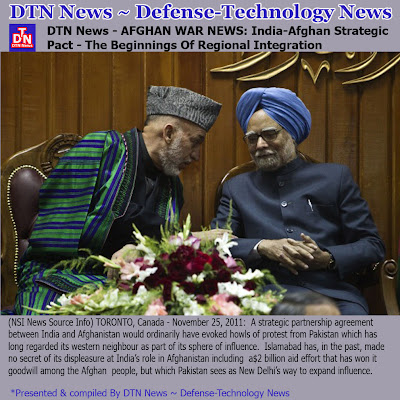