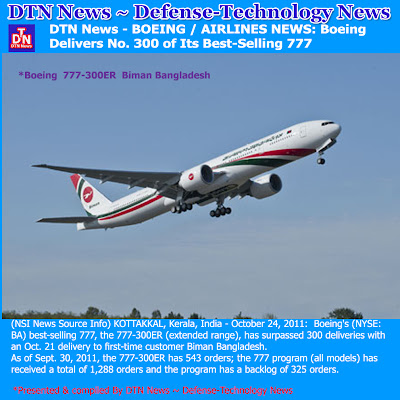 e customer Biman Bangladesh.
As of Sept. 30, 2011, the 777-300ER has 543 orders; the 777 program (all models) has received a total of 1,288 orders and the program has a backlog of 325 orders.
"Introduced into service in 2005, the 777-300ER is the best seller for a reason," said Larry Loftis, 777 vice president and general manager. "It is distinguished by its fuel efficiency, award-winning cabin interior, range – it can fly point to point bypassing crowded hub airports – and its commonality with the Boeing 767 and 787."
The 777-300ER has been ordered by 37 customers around the globe. Twenty-seven customers now operate the 777-300ER; 10 additional customers will take delivery of their first 777-300ERs through 2014.
Approximately 35 percent of the 777-300ER was changed from earlier 777 models. Each wing was extended by 6.5 feet (1.98 m) by adding raked wingtips, which reduce takeoff field length, increase climb performance and reduce fuel burn.
The body, wing, empennage and nose gear of the airplanes were strengthened and new main landing gear, wheels, tires and brakes were installed. New semi-levered landing gear permits takeoffs on shorter runways.
The struts and nacelles were modified to accommodate the significantly higher-thrust engines. The airplanes are powered exclusively by the General Electric GE90-115BL engine, the world's largest and most powerful commercial jet engine, producing 115,300 pounds (512 kn) of thrust.
"The newest generation of the 777 delivers exceptional value," Loftis said. "It is consistently ranked at the top of operator and investor polls, and the 777 generates more revenue, providing more payload and range capability while setting the standard for twin-aisle reliability.
"As the leader in the 300- to 400-seat market with nine out of the world's top 10 airlines flying the 777, Boeing will continue to lead the market by incorporating new technology and innovations to improve operating costs, airplane performance and the passenger experience," Loftis said.
Boeing's updated Current Market Outlook forecasts the twin-aisle market as the fastest-growing segment of the market over the next 20 years with a demand for 7,000 new airplanes in the 777 and 787 size range.