Source: DTN News - - This article compiled by Roger Smith from reliable sources including By Joshua Partlow and Javed Hamdard - Washington Post Foreign Service Saturday, August 28, 2010; 7:58 AM
(NSI News Source Info) KABUL, Afghanistan - August 28, 2010: Insurgents disguised as American soldiers attacked two U.S. bases in eastern Afghanistan on Saturday morning and managed to breach the perimeter of one of them before being repelled, according to NATO and Afghan officials. 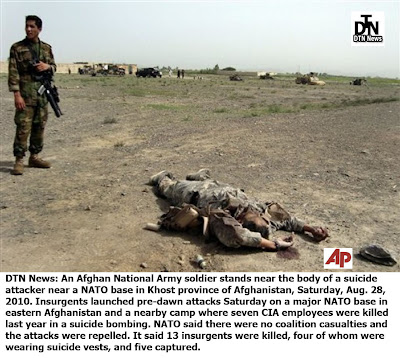 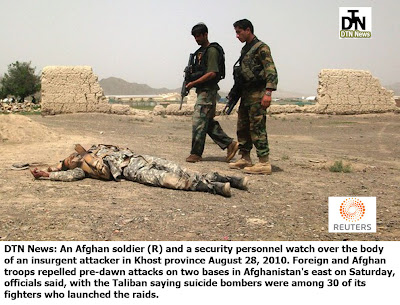 The assault began at about 4 a.m., when dozens of Taliban fighters, some wearing U.S. military uniforms, launched simultaneous attacks on Forward Operating Base Salerno, in Khost province, and nearby Forward Operating Base Chapman, where a suicide bomber killed seven CIA employees in December.
They fired mortars or rockets, along with grenades and guns, and two insurgents entered FOB Salerno by cutting a hole in a fence, NATO officials said. No Afghan or U.S. troops died in the assault, but four NATO troops and an Afghan policeman were wounded, and a 12-year-old Afghan boy was killed, according to Gen. Abdul Hakim Ishaqzai, the police chief in Khost.
The response to the attack was swift and deadly. Afghan security forces, along with U.S. troops, killed about 15 insurgents at FOB Salerno and six more at FOB Chapman, while three others were killed by an airstrike after they were spotted fleeing the scene of the attacks, NATO said.
The attacks appeared to have been orchestrated by the Haqqani network, one of the most lethal Taliban factions, led by commander Sirajuddin Haqqani. His fighters operate primarily in eastern Afghanistan and have been responsible for violent attacks inside Kabul. NATO said a Haqqani network fighter named Mudasir was one of those killed in the assault on the bases.
Insurgents have laid siege to other heavily fortified U.S. bases this year, such as Kandahar Airfield and Bagram Air Base. But such attacks are rare, and insurgents generally fail to cause significant damage to the installations.
Ishaqzai, the police chief, said 48 insurgents took part in the assault on the two Khost bases, including several armed with suicide vests. NATO said it recovered a car bomb, seven suicide vests, two recoilless rifles and other unexploded munitions.
A Taliban spokesman, Zabuillah Mujahid, claimed responsibility for the attack in text messages to local Afghan reporters.
**Link to this article " Taliban Fighters, Some Disguised As American soldiers, Attack Two U.S. Bases - By Joshua Partlow and Javed Hamdard - Washington Post Foreign Service Saturday, August 28, 2010; 7:58 AM "
**This article is being posted from Toronto, Canada By DTN News ~ Defense-Technology News, contact: dtnnews@ymail
Taliban Related News
The Hindu

US WITHDRAWAL TO EMBOLDEN TALIBAN TO LAUNCH FULL OFFENSIVE: KARZAI

AHN | All Headline News - ‎1 hour ago‎
For long, it has been known that Taliban leaders and other extremist groups go across the border to Pakistan's restive region of Swat Valley to recruit ...
Barack Obama US troop withdrawal deadline a 'boost' to Taliban Telegraph.co.uk
A timetable for the Taliban The Guardian
CBS News - Voice of America - RTT News - BBC News
all 454 news articles »
Boston Globe

'US TAKING PRECAUTION FOR SAFETY OF ITS PERSONNEL IN PAK'

Hindustan Times - ‎6 hours ago‎
"We're in possession of threat information (from the Taliban). We are talking to and working with the government of Pakistan to do everything we can to make ...
Chief: Military taking aid worker threat seriously The Associated Press
all 227 news articles »
Pak Watan

Press TV - ‎4 hours ago‎
Pakistan rejects fears of Taliban attack on foreign aid workers helping the authorities in providing relief to the victims of the worst floods in the ...
Foreign aid workers are under no threat in Pakistan: Rehman Malik Regional Times
all 51 news articles »
Los Angeles Times

Pocono Record - Douglas Cohn, Eleanor Clift - ‎9 hours ago‎
Explaining why the Taliban must be defeated got an unexpected boost from a public-relations perspective when the extremist group ordered the public stoning ...
Marines in Afghanistan prepared for a long haul Los Angeles Times
US looks for gracious exist from Afghanistan The Voice of Russia
AFP - PipeLineNews.org - Evansville Courier & Press - Antiwar.com
all 30 news articles »
The Guardian

TALIBAN COULD BE MISLEADING ITS FORCES

WHY IT'S OKAY TO WAGE JOYSTICK JIHAD

CTV.ca - ‎21 hours ago‎
KANDAHAR, Afghanistan - Afghan and international forces have moved into a village on the outskirts of Kandahar city, where Taliban insurgents had taken ...
Kansas City Star

'WE WANT TO TALK TO THE TALIBAN. BUT THEY WOULD RATHER KILL THEMSELVES'

Independent - ‎14 hours ago‎
Once the tractor packed with explosives had prematurely detonated there was little chance of theTalibanfighters getting through, their suicide vests ...
Soldiers receive bravery honours Toronto Sun
all 7 news articles »
MyFox Washington DC

PETRAEUS: RECONCILIATION WITH TALIBAN IS ULTIMATE GOAL FOR AFGHANISTAN'S FUTURE

FOXNews - ‎Aug 25, 2010‎
Reconciliation with the Taliban will ultimately be a goal for Afghanistan once US and Afghan forces create conditions to allow it, Gen.
US has helped with Taliban talks in Afghanistan: general AFP
US 'facilitated' Afghan talks with Taliban in some "isolated cases": Petraeus Sify
FOXNews - UPI.com - Syosset Jericho Tribune - MyFox Chattanooga
all 85 news articles »

TIME - Robert Baer - ‎1 hour ago‎
(See pictures of the battle against the Taliban.) It would be a mistake to dismiss this debate as another instance of Washington inside baseball that ...
CIA contributes to Afghan government corruption. Karzai says Obama aidingTalibanExaminer.com
CIA making secret payments to members of Karzai administration Tehran Times
Huffington Post (blog) - Firedoglake (blog) - NPR - Reuters
all 705 news articles »
Oneindia

AFGHANS DEMONSTRATE AGAINST TALIBAN IN GHAZNI