Brazil holds out for better deal on fighter jets 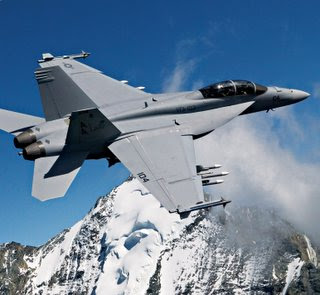 Brazilian president seeks better deal on fighter-jet bids from Dassault, Saab, Boeing
BRASILIA, Brazil September 13, 2009, (AP) -- Brazilian President Luiz Inacio Lula da Silva said Friday he is holding out on a multibillion-dollar contract for 36 fighter jets in case there are better offers. (Image: F-18 Super Hornet)
Brazil is carrying out technical evaluations on bids to deliver 36 fighters by France's Dassault SA, Sweden's Saab AB and Boeing Co. of Chicago.
Silva said he has the final word on the winner, and negotiations are not over if a bidder wants to offer better terms.
Brazil said the companies have until Sept. 21 to formalize their offers. The air force expects to finish the technical evaluations by November.
Brazil has hinted at close negotiations for Dassault's Rafale fighters.
Saab is offering its Gripen fighter and Boeing Co. is proposing the F-18 Super Hornet.
Posted by DEFENSE NEWS at 7:50:00 AM No comments:

Raytheon Co. September 13, 2009, (NYSE: RTN - News) bagged a $77 million contract from the US Air Force for building missiles for Korea and Taiwan. According to terms of the contract, the company will produce AGM-65D and AGM-65G2 infrared-guided Maverick air-to-surface missiles for the two Asian nations. 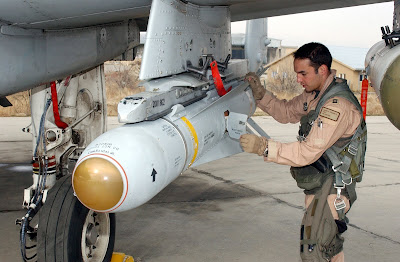 Raytheon will manufacture and provide life-cycle support for more than 250 new missiles. The company began producing the missiles’ infrared guidance and control sections in November 2008.
The company’s AGM-65 Maverick is a class of air-to-ground tactical missile used by US Air Force, Navy, Marine Corps and 33 international customers. Its AGM-65D has a 125-pound warhead with a forward-firing, conical-shaped charge for armor penetrations. Raytheon’s AGM-65G2 employs a 300-pound blast fragmentation/penetrator warhead that was developed for maximum effectiveness against larger, reinforced targets. The company has manufactured more than 69,000 AGM-65 missiles till date.
Raytheon is the one of the largest aerospace and defense companies in the U.S., with a well-diversified line of military products including missiles, radars, sensors, surveillance and reconnaissance equipment, communication and information systems, naval systems, air traffic control systems and technical services. We maintain our market outperform recommendation on the shares.
RAYTHEON CO (RTN): Read the Full Research Report
Zacks Investment Research
Posted by DEFENSE NEWS at 7:44:00 AM No comments:

American Airlines in talks to invest in JAL: source

TOKYO (Reuters) - American Airlines is in talks to take a stake in Japan Airlines (Tokyo:9205.T - News) and to expand their business partnership, a source with direct knowledge of the matter said.
Reuters - A Japan Airlines aircraft takes off at Haneda international airport in Tokyo September 13, 2009. REUTERS/Toru Hanai ...
The two sides have been talking for weeks about forming closer business ties that may include a revenue-sharing agreement and joint contracts for business clients, pending the enactment of an "open skies" agreement between Japan and the United States.
"I'm not talking about hugs and kisses. I'm talking about economic value to Japan Airlines," the source said, speaking on condition of anonymity because the negotiations are not public and nothing has been decided.
Delta Air Lines (NYSE:DAL - News), the world's biggest carrier, is also in talks to invest in Japan Airlines, which has fallen deep into the red on a slump in revenue and a high cost base and is now restructuring with the help of state-backed loans.
A deal with Delta could cause headaches for American, including a possible defection by JAL to the SkyTeam network.
JAL is currently part of the Oneworld alliance along with American Airlines, British Airways (LSE:BAY.L - News) and others.
"We are ready to be overall competitive with Delta," the source said.
American Airlines is a unit of AMR Corp (NYSE:AMR - News).
Posted by DEFENSE NEWS at 7:39:00 AM No comments:

TOKYO, Sept 13 (Reuters) - Japan Airlines Corp (9205.T) is considering raising about 250 billion yen ($2.76 billion) by March through measures including new shares issuances and borrowings, the Nikkei business daily reported on Sunday.
Delta Air Lines (DAL.N), the world's largest carrier, is in talks to take a minority stake in JAL in a bid to expand its reach in Asia, a source familiar with the matter said on Friday. [ID:nN11471217]
The newspaper reported, without citing any sources, that Japan's top airliner is also planning to seek capital injection from Delta Air and seek money from domestic trading houses and investment funds.
In addition, the cash-strapped airliner is considering raising cash by selling shares of its subsidiaries, Nikkei said.
Japan's national broadcaster NHK reported on Saturday JAL is seeking a capital injection of about 50 billion yen from Delta, as well as several billion yen from Air France-KLM (AIRF.PA). [ID:nT104517]
Cash-strapped JAL is due to submit a restructuring plan to the government by the end of the month.
JAL secured a 100 billion yen government-backed loan in June and is widely expected to ask for more financial assistance to help it restructure.
JAL posted a 99 billion yen net loss for the April-June quarter and is headed for its second-straight annual loss this business year to March, hit by a downturn in travel and as it struggles to rein in costs. ($1 = 90.69 yen) (Reporting by Chikafumi Hodo; Editing by Sugita Katyal)
Posted by DEFENSE NEWS at 7:36:00 AM No comments: