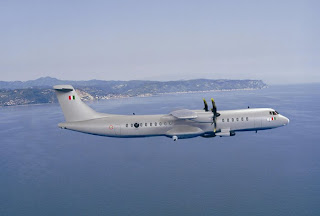 Lagos, Nigeria Dec. 20, 2009 (Defense News) - The Nigerian Air Force (NAF) has received the first of two Alenia Aeronautica ATR 42MP maritime patrol aircraft, the company announced on 9 December.
According to Alenia Aeronautica, the second aircraft is being converted and will be handed over in 2010.
The contract for two aircraft, which was signed in March 2007, covers the provision of pilot and operator training on the basic aircraft (at the ATR Training Centre in Toulouse, France) as well as on the maritime patrol (MP) configuration of the aircraft and the mission system (at the Alenia Aeronautica Training Centre at the Caselle South site in Turin, Italy).
Nigeria has requested that training take place in-country from 2010 onwards, so as to allow the NAF to benefit from full use of the aircraft as quickly as possible.
Posted by DEFENSE NEWS at 12:55:00 PM No comments: