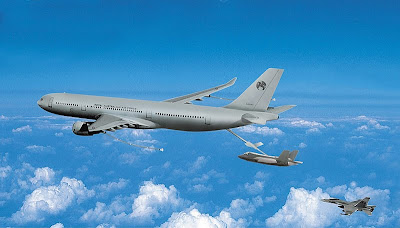 "This is an extremely lucrative contract and I don't think we have any doubt that there will be a healthy competition to win it," Geoff Morrell, a Pentagon spokesman, told reporters at a news conference.

"I find that extraordinarily hard to believe," Morrell added, referring to Northrop's refusal earlier on Wednesday to rule out a boycott of the competition.

If Northrop dropped out of the bidding to replace the U.S. Air Force's aging tanker fleet, it would leave rival Boeing Co (BA.N) as the sole bidder.

The Pentagon is expected to release the final bidding terms in November and aims to award the contract by June.

Northrop, which won an earlier bidding contest for the contract, said it might take legal action over its allegation the U.S. government improperly gave rival Boeing sensitive bidding price information. Northrop and its partner, Airbus parent EADS (EAD.PA), say that gives Boeing an unfair advantage this time around.

Asked if Gates would again try to kill the second engine, Morrell said: "That is the discussion that is taking place between the secretary and his budget team as they go about building the FY 11 budget request." (Reporting by Jim Wolf; editing by Andre Grenon)
Posted by DEFENSE NEWS at 6:38:00 AM No comments: 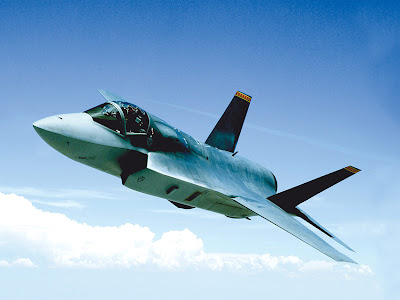 "Lockheed Martin recognizes that we need to deliver more than a contract or a specification-compliant system to achieve real mission success," said Dan Crowley, Lockheed Martin executive vice president and F-35 program general manager. "Service program managers are being selected to ensure each customer has a single point of entry into the program, accountable for successful fleet introduction and IOC."

The service program managers will interface directly with Naval and Air Force officers to help ensure successful completion of testing, prepare the fleet to receive the F-35, ensure logistics support, and provide support for the services' decision making on future modernization priorities. They also will work in full cooperation with the Joint Strike Fighter Program Office to ensure consistency of effort, and to reflect common program priorities.

Before taking on his new role, Sandstrom was Deputy Director of the F-16 Greece Program at Lockheed Martin. Prior to 2004, Sandstrom served 33 years in the Air Force. He graduated from the U.S. Air Force Academy in 1971 and received a Master of Science in Aeronautics and Astronautics from Purdue University in 1972. He was commander of the 19th Air Force, Air Education and Training Command, at Randolph Air Force Base, Texas, where he was responsible for the day-to-day flight training of approximately 2,000 U.S. and allied students. During his Air Force career, Sandstrom served as a fighter weapons instructor, Deputy Commander for Operations, and commanded a fighter squadron, a fighter wing and two composite wings. He held a variety of staff positions at major command, unified command, Air Staff and Secretary of the Air Force levels. He also served as Director of Operations, and subsequently, as Chief of Staff for Operation Enduring Freedom at Headquarters U.S. Central Command. Sandstrom is a command pilot with more than 3,400 hours, primarily in fighter aircraft.

Weatherspoon, a 1972 graduate of the U.S. Naval Academy, received his Master of Science in Engineering from Princeton University in 1973, graduated from the United States Air Force Test Pilot School in 1979, and received a Master of Arts degree from the U.S. Naval War College in 1990. In his 20-year Navy career, Weatherspoon flew more than 3,500 F-14 hours with over 900 carrier landings. He completed three operational tours with F-14 squadrons, culminating in the command of Fighter Squadron 143 aboard USS Eisenhower. Joining Lockheed Martin (then General Dynamics) in November 1992, Weatherspoon was responsible for a carrier-suitable design for the Navy's AFX Program. He has been associated with the JAST/JSF Program since its inception in 1993, leading Innovative Strike Concepts studies, proposals, technology assessments, test programs, and assuring F-35 design carrier suitability. He led JSF Navy Business Development efforts from 1996 to 2003, when he was assigned the as F-35 Deputy Chief Engineer for Operational Effectiveness and Suitability. In 2007, Weatherspoon was selected as Director, F-35 Air System Integration, responsible for the overall System Engineering, Requirements, Mission Effectiveness and Survivability, System Security and Verification aspects of the program.

Headquartered in Bethesda, Md., Lockheed Martin is a global security company that employs about 140,000 people worldwide and is principally engaged in the research, design, development, manufacture, integration and sustainment of advanced technology systems, products and services. The corporation reported 2008 sales of $42.7 billion.

Ecommerce is Made Simpler with Improved Product Imagery and Navigation Tools

Visitors are now rewarded with compelling video and more detailed product imagery throughout the site. “We installed new filtering tools to improve product navigation. Consumers can now find the exact product they’re looking for based on activity, features, climate, color, height and fit. We even thought about the long footed man – making it much faster to find size 15 Danner boots,” says Micah Davis, Ecommerce Manager at Danner Footwear. “The updated look and feel, and site layout is designed to simplify the user experience even though we are featuring more content than ever before.”

Consumer stories detail real-life experience with the product. The featured homepage story is a must read! “Now 29 Years Later I Have Proven My Wife Very Wrong…” Other consumer experiences include “My Danner Boots vs. The Drunk,” “Quality In A Name,” “Second Tour In Iraq” and “Make Or Break My Name.” To experience Danner is to experience a lifetime foot-to-boot relationship. After years upon years of abuse, longtime wearers can avoid tossing their favorite boots into landfills by utilizing Danner’s Recrafting Department located within the Portland, Oregon factory. Many Danner boots can be resoled and reworked to go even further.

Recognizing the importance of trying product on, the new site layout makes it much easier to find a store by city and zip code. Visitors are also given the option to order product direct from Danner with free shipping and free returns within the continental U.S. (does not include AK and HI).

Film and video communicate Danner’s unique hands on approach for crafting higher standards – from hand cutting and grading leather to high quality components and materials such as the Vibram® outsole and GORE-TEX® lining. The HD video, found on the homepage, brilliantly shares the boot maker’s pleasure and pride in craftsmanship. The video can easily be shared by a simple ‘click of the mouse’ via email and social networks on Facebook, Twitter and MySpace.

About Danner
Danner is a wholly owned brand operated by LaCrosse Footwear, Inc. (Nasdaq: BOOT - News). The company’s trusted Danner® and LaCrosse® brands are sold to a network of specialty retailers, sporting goods, online retailers and distributors in the United States, Canada, Europe and Asia. Work customers include people in law enforcement, transportation, mining, oil and gas exploration and extraction, construction, military services and other occupations that require high-performance and protective footwear as a critical tool for the job. Outdoor recreation customers include people active in hunting, hiking, ice fishing and other outdoor recreational activities. For more information about Danner footwear and accessories, please visit our new website at www.danner.com.

ATK ~ October 28, 2009
MINNEAPOLIS, Oct. 28 /PRNewswire-FirstCall/ -- Alliant Techsystems' (NYSE: ATK - News) first stage ignited today at 11:30 a.m., launching the Ares I-X flight test for NASA and igniting the next generation in American spaceflight. The Ares I is designed to be the safest rocket ever developed to deliver humans to space.

"The successful launch of the Ares I-X continues to demonstrate decades of flawless performance and the progress ATK and NASA have made to develop the most reliable and affordable family of solid rocket motors ever produced," said Blake Larson, ATK Space Systems president. "This flight provides critical data that can be tested only in a flight environment and will be a key building block for maturing the design of Ares I and developing Ares V."

The 177-foot-tall, 12-foot diameter first stage produced 3.3 million pounds of thrust to propel the vehicle from liftoff to stage separation 124 seconds into the flight. At 130,000 feet, the first stage parachutes deployed, enabling the spent booster to slow its descent prior to splashing down into the ocean where it will be recovered for reuse.

"This flight test is the culmination of four years of progress and is the critical first step to launching America beyond low earth orbit, signifying the beginning of a new era for the American space program," said Mike Kahn, ATK Space Systems executive vice president. "The Ares I architecture provides unmatched crew safety and performance for payload capacity, all while utilizing existing infrastructure."

The flight test of the Ares I-X brings America one step closer to the goals of sending humans beyond low Earth orbit for sustained exploration of multiple destinations throughout the Solar System. The launch is a critical milestone in the development of NASA's Constellation Program, which will also support missions to the International Space Station.

The Ares I-X First Stage is comprised of a four-segment Reusable Solid Rocket Motor (RSRM) originally produced for the Space Shuttle Program, and newly designed hardware including the frustum, forward skirt extension, forward skirt and a simulator representing the fifth segment that will fly on the Ares I vehicle. The solid rocket motor cases used for Ares I-X have collectively flown on 30 previous shuttle missions and will continue to be reused for the Ares program. The solid rocket motors were produced at ATK's facility in Promontory, Utah, and the new hardware was manufactured by Major Tool and Machine Inc. in Indianapolis, Ind., under a contract to ATK.

ATK and NASA have continually improved their techniques and processes to increase the safety and mission reliability of the RSRMs. These motors have undergone countless subscale material characterization tests that tie together complex analyses with hard data. They have also undergone 27 full-scale ground tests, including a successful test of the Ares I first stage five-segment development motor conducted last month.

ATK is a premier aerospace and defense company with more than 18,000 employees in 22 states, Puerto Rico and internationally, and revenues of approximately $4.8 billion. News and information can be found on the Internet at http://www.atk.com/.

Certain information discussed in this press release constitutes forward-looking statements as defined in the Private Securities Litigation Reform Act of 1995. Although ATK believes that the expectations reflected in such forward-looking statements are based on reasonable assumptions, it can give no assurance that its expectations will be achieved. Forward-looking information is subject to certain risks, trends and uncertainties that could cause actual results to differ materially from those projected. Among those factors are: the strategic, technical, budgetary, and scheduling goals of NASA's Constellation program; assumptions related to the design, safety and performance of the Ares program; changes in governmental spending, budgetary policies and product sourcing strategies; the company's competitive environment; the terms and timing of awards and contracts; and economic conditions. ATK undertakes no obligation to update any forward-looking statements. For further information on factors that could impact ATK, and statements contained herein, please refer to ATK's most recent Annual Report on Form 10-K and any subsequent quarterly reports on Form 10-Q and current reports on Form 8-K filed with the U.S. Securities and Exchange Commission.