China today said a "new breakthrough" has been achieved in its military relations with India, noting that a high-level Indian defence delegation would soon be visiting this country. 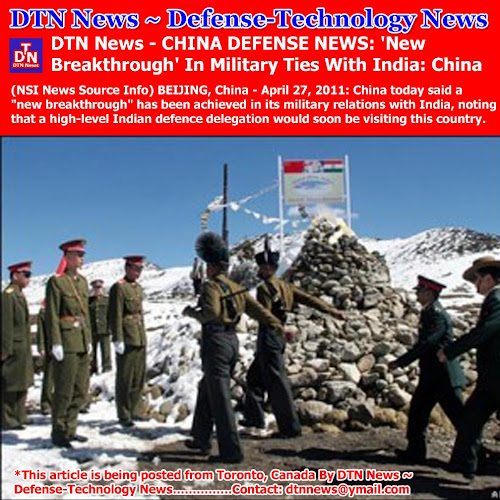 "New breakthroughs" and developmental momentum have emerged in Sino-India military ties, Geng Yansheng, a spokesman for the Chinese Defence Ministry, was quoted by the state-run Xinhua news agency as saying.

The visiting delegation of Indian border patrol forces will include officers from several branches of India's military, Geng said, without providing details.

He was apparently referring to a recent decision by India and China to resume defence exchanges at the meeting between Prime Minister Manmohan Singh and Chinese President Hu Jintao in Sanya on the sidelines of the BRICS Summit.

The defence ministry has asked Eurofighter and French Dassault Aviation to extend validity of their commercial bids for the multi-billion dollar contract for 126 combat aircraft, sources said here on Wednesday night, in an indication they could be shortlisted for IAF’s mega deal. 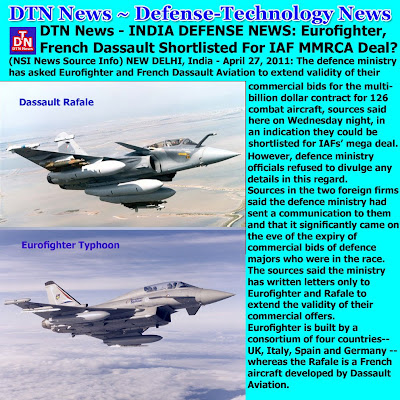 However, defence ministry officials refused to divulge any details in this regard.

Sources in the two foreign firms said the defence ministry had sent a communication to them and that it significantly came on the eve of the expiry of commercial bids of defence majors who were in the race.

The sources said the ministry has written letters only to Eurofighter and Rafale to extend the validity of their commercial offers.

Eurofighter is built by a consortium of four countries--UK, Italy, Spain and Germany -- whereas the Rafale is a French aircraft developed by Dassault Aviation.

Alongwith these two fighters, four other aircraft--the American F-16 and F/A-18, Russian MiG 35 and Swedish Saab Gripen-- vied with each other in the five-year long tender for the much awaited deal.

Following the defence ministry communication, the remaining four companies will now not be allowed to extend the validity of their offers and their bids will expire tomorrow.

The Indian Air Force(IAS) had tested the six defence majors in the fray on 643 parameters and marked them on the basis of their performance in the Field Evaluation Trials (FET).

At this year’s Aero India show in February, the IAF Air Chief Marshal P V Naik had announced that the commercial negotiations for the project would begin shortly and the deal was expected to be signed shortly.

The process of evaluation was concluded early last year and a report submitted to the defence ministry.

The IAF chief had also warned that the deal could be delayed if the losing contenders in the fray decided to go against the government decision in courts or the CVC.

The deal was hit by controversy after an important file related to the offsets was recovered from a roadside in the Khel Gaon locality here.

Stephen Harper tried to reassure Canadians Tuesday that taxpayerswon’t get soaked by a rising price tag for 65 stealth fighter-bombers the Conservatives are buying from the Americans.

The Department of National Defence said this week it’s been warned to expect the per-unit price of the F-35 jets might be higher than the $75-million it’s been advertising to Canadians. 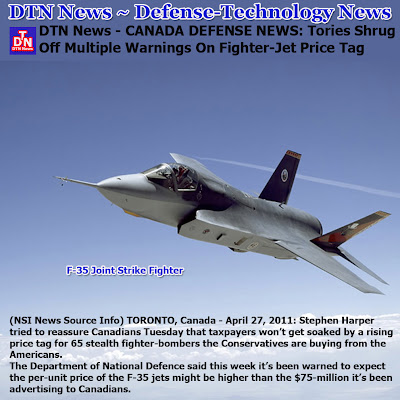 This follows two developments that could spell trouble for the Conservatives: a recent Pentagon report detailing rising production costs for the jets as well as leaked U.S. defence paper that suggests 30 years of maintenance costs could be three times higher than Ottawa has acknowledged.

“Many of these reports you are citing are comparing apples to oranges,” Mr. Harper said. “Our experts have put out their detailed figures and everything we’ve seen is within those figures and their contingencies, the contingencies that have been allowed.”

Michael Ignatieff’s Liberals have vowed they would cancel the deal if they won power and instead allow open bidding to supply Canada’s next warplane. The Conservatives chose the F-35 jet without allowing an open competition among suppliers.

NDP Leader Jack Layton, meanwhile, says new fighter planes are not a key defence priority right now – although he later acknowledged replacement fighters will “have to be part of the mix.”

Mr. Layton has attacked the Conservatives plan to buy F-35s, arguing the costs remain unknown and appear likely to be far higher than the government’s official estimates. But he was vague on what he thinks Canada needs, while suggesting that fighter jets are not crucial to what he sees as Canada’s defence priorities.

A document from a Pentagon cost-analysis unit leaked to Bloomberg News, forecasts lifetime maintenance costs for the F-35s at roughly $375-million per jet.

Calculations by Canadian Press indicate this would lead to a 30 year maintenance bill for Canada of more than $24-billion – far above Ottawa’s estimates and even higher than what Parliamentary budget watchdog Kevin Page recently forecast.

The Department of National Defence forecasts maintenance costs of $7-billion over 20 years but Mr. Page says a 30-year timeline is more realistic and adds that upgrades after two decades will help push the lifetime upkeep costs to $19.5-billion.

Mr. Layton, appearing on a Montreal TV morning show, said he sees protecting Canadian sovereignty, defending the country, and responding to disasters at home and abroad as priorities for defence. “And are fighter planes key to these projects? I think probably not,” Mr. Layton said.

He later told reporters that Canada’s existing CF-18 fighters won’t last forever, so some kind of replacement will “clearly have to be part of the mix.”

Just what kind of mix the NDP prefers remains vague. The party’s defence policy calls for publishing a white paper within a year to examine defence priorities, and then what equipment would be needed to meet them – rather than outlining a more detailed policy now.

“There’s been this arbitrary approach, saying, ‘we’ll go and get the fanciest fighters available that are increasingly expensive,’” Mr. Layton said. “Nobody knows now how much they’re going to cost, they may or may not have engines on them when we buy them. The maintenance costs seem to be going up. The main purchaser in the United States seem to have grave doubts about the whole program now.”

In fact, the Obama Administration remains officially committed to the F-35s, though in smaller numbers – but Congress’s Government Accounting Office has warned of technical problems and projected costs that are roughly double those estimated by Canada’s department of defence.

Mr. Layton said the NDP would put more emphasis on the navy, notably replacing its decrepit supply ships, needed to re-fuel Canadian warships if they are to sail as an independent task force over long distances.

With a report from The Canadian Press 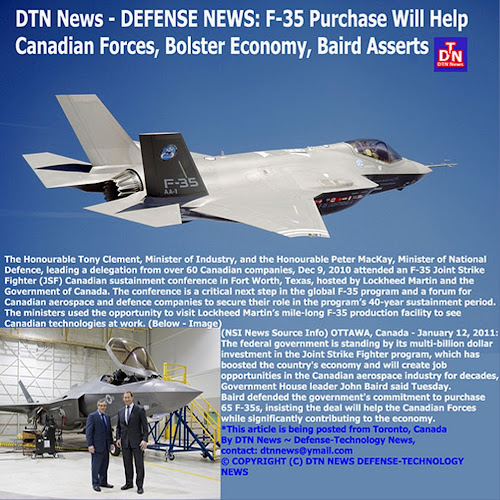 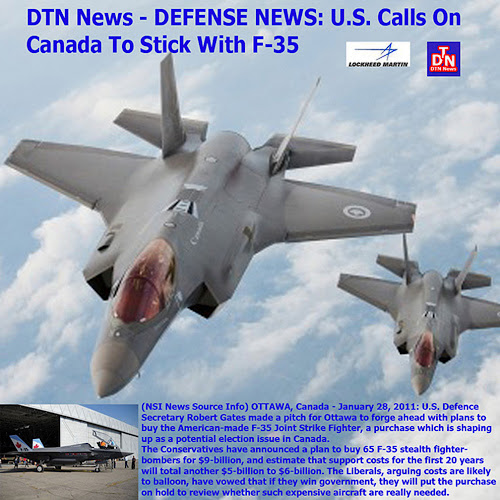 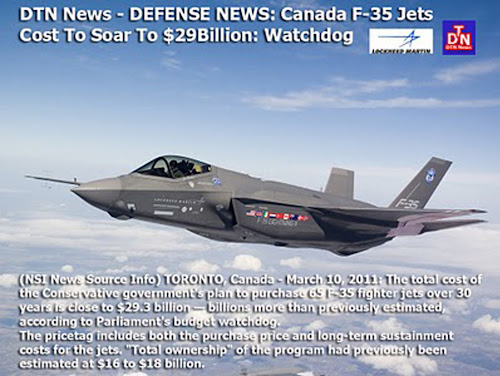 DTNCanada DTN Canada
DTN Canada: Vancouver breathes a sigh of relief: It wasn’t the Stanley Cup winning game, but this Game 7, in thi...http://bit.ly/f5TNdi
1 hour ago