Source: DTN News - - This article compiled by Roger Smith from reliable sources By Spencer Ackerman - Wired(NSI News Source Info) TORONTO, Canada - November 30, 2012: Israel’s retiring defense chief thinks Iran needs to be “coerced” in 2013 from building an atom bomb, despite any U.S. hopes that sanctions will bring Tehran to the negotiating table. And the recent success of his new, U.S.-funded missile defenses seems to have convinced him that Israel is better able than ever to deter its Iran-backed foes.
“Of course, we would love to see some heavenly intervention that will stop them, to wake up some morning and learn that they’ve given up on their nuclear intentions,” Barak told reporters at the Pentagon Thursday during a joint press conference with Leon Panetta, his American counterpart. “You cannot build a strategy based on these wishes or prayers. Sanctions are working and they are more hurting than anything I remember from the past vis-a-vis Iran, but I don’t believe these kinds of sanctions will bring the ayatollahs to a moment of truth where they sit around a table, look into each other’s eyes and decide that the game is over.”
Not exactly what Panetta wanted to hear during what was supposed to be a friendly press conference in which they celebrated how the U.S.-backed Iron Dome rocket defense system stopped Hamas’ rocket attacks cold. The U.S. defense chief, who effused over the retiring Barak as “a man of peace” and praised their long friendship, said the “unprecedented pressure” on Iran from international sanctions present “time and space for an effort to try to achieve a diplomatic solution.”
Not likely, thinks the retiring Barak. “During the coming year and hopefully before they reach what I have called a ‘zone of immunity’” — a point at which Israeli airstrike couldn’t meaningfully hinder Iranian nuclear work — Iran “will be coerced into putting an end to it this way or another way,” Barak said. “The physical attack option is an option that should be there, should remain on the table, never be removed.”
That may be short of a pledge to attack Iran next year, but it’s hardly a vote of confidence in any alternative. And it reflects a lingering divide in U.S. and Israeli goals on Iran, despite the rhetoric of unity. “We will prevent Iran from obtaining a nuclear weapon,” Panetta said, “and that remains our policy.” Barak’s policy is different: to stop Iran from even getting to the point in its technological nuclear work where an airstrike is senseless, before Iran gets the bomb. The Israeli defense chief acknowledged “sometimes slight differences” with U.S. policy “that should be better discussed behind closed doors.”
However much Barak seems resigned to Iran’s determination “to go in the footsteps of Pakistan and North Korea,” he also mused out loud about Iron Dome as a security game-changer for Israel. Not because a system that was “extremely successful” at stopping unguided Qassam rockets can also stop Iranian Shahab-3 ballistic missiles — it can’t. But because of the demonstration effect that Israeli missile-defense technology can have on Iran and its proxies.
“The very knowing of the other side that you have such an effective system, especially when we’ll be equipped with many more interceptors, it will change the balance of contemplation on the other side,” Barak said. “It creates a logical kind of deterrent, not a psychological one, because any enemy that tries against Israel is exposed to the effectiveness of our efforts that we’ve seen during in this operation.” Especially since, Barak noted, Iron Dome’s big brothers — David’s Sling and the Arrow — are in development to stop more powerful missiles launched by Iran and Hezbollah.
Barak won’t be defense minister next year, as he announced this week he’s retiring from politics. But if other prominent Israeli decision-makers think that Iron Dome restored Israel’s ability to deter adversaries, imagine the value they might place on an Iran attack next year.
*Link for This article compiled by Roger Smith from reliable sources By Spencer Ackerman - Wired*Speaking Image - Creation of DTN News ~ Defense Technology News *This article is being posted from Toronto, Canada By DTN News ~ Defense-Technology News Contact:dtnnews@ymail.com ©COPYRIGHT (C) DTN NEWS DEFENSE-TECHNOLOGY NEWS
Read more »
Posted by DEFENSE NEWS at 5:03:00 AM No comments: 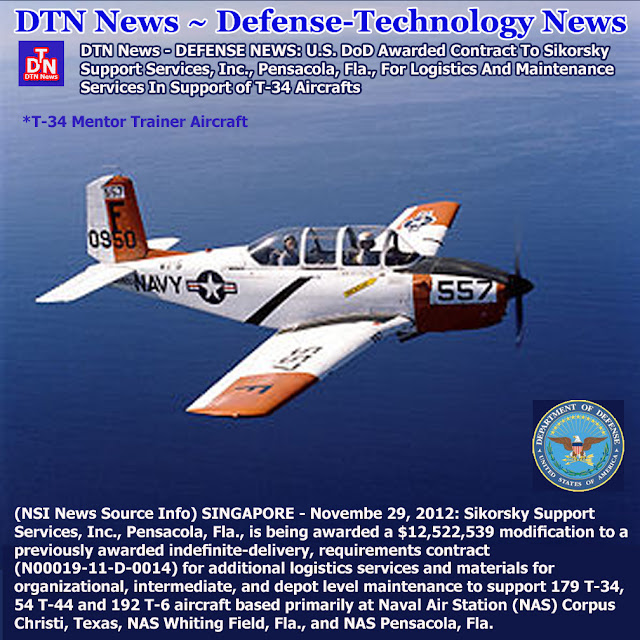 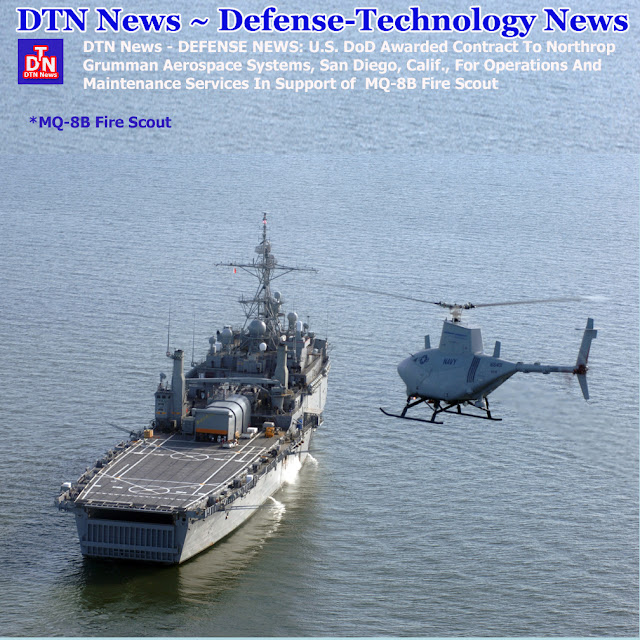 Work will be performed in Afghanistan (90 percent), and Patuxent River, Md. (10 percent), and is expected to be completed in November 2013.
This contract was not competitively procured pursuant to FAR 6.302-1.
Contract funds in the amount of $1,500,000 will be obligated at time of award and will expire at the end of the current fiscal year.
The remaining funding will be obligated on individual delivery orders as they are issued.  The Naval Air Systems Command, Patuxent River, Md., is the contracting activity (N00019-13-C-0018).Northrop Grumman's Transformational Fire Scout Vertical Takeoff and Landing Tactical Unmanned Aerial Vehicle system provides unprecedented situation awareness and precision targeting support for U.S. Armed Forces of the future.The MQ-8B Fire Scout has the ability to autonomously take off and land on any aviation-capable warship and at prepared and unprepared landing zones in proximity to the soldier in contact. The U.S. Navy has selected Northrop Grumman (NYSE:NOC) to produce the next-generation Fire Scout unmanned helicopter using the Bell 407 airframe. The new variant provides greater range, endurance and payload capacity to ship commander's intelligence-gathering efforts.According to a U.S. Department of Defense news release on contract awards released April 23, the company will produce a total of eight Fire Scouts within an amount not to exceed $262 million. The Navy plans to purchase a total of 28 aircraft under a rapid development effort.The Fire Scout endurance upgrade has been designated as the MQ-8C."Through our company-funded Fire-X demonstration effort we proved that using the mature unmanned systems architecture developed for the MQ-8B Fire Scout paired with the Bell 407 helicopter would provide greater capability efficiently and affordably," said Duke Dufresne, vice president and general manager for unmanned systems. "By using systems that have many years of development already invested in them we can meet the Navy's needs quickly."Northrop Grumman is the prime contractor for the MQ-8C program. Major suppliers for new variant include Bell Helicopter and Rolls Royce.Final assembly of the new Fire Scout variant will be completed at Northrop Grumman's Unmanned Systems Center in Moss Point, Miss.Northrop Grumman is a leading global security company providing innovative systems, products and solutions in aerospace, electronics, information systems, and technical services to government and commercial customers worldwide. Please visit www.northropgrumman.com for more information.*Link for This article compiled by Roger Smith from reliable sources U.S. Department of Defense No. 930-12 - November 28, 2012*Speaking Image - Creation of DTN News ~ Defense Technology News *This article is being posted from Toronto, Canada By DTN News ~ Defense-Technology News Contact:dtnnews@ymail.com ©COPYRIGHT (C) DTN NEWS DEFENSE-TECHNOLOGY NEWS
Read more »
Posted by DEFENSE NEWS at 6:25:00 AM No comments: 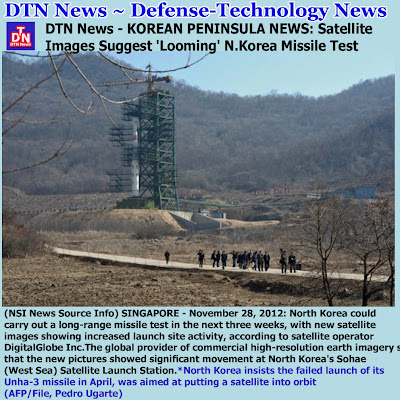 The global provider of commercial high-resolution earth imagery said Monday that the new pictures showed significant movement at North Korea's Sohae (West Sea) Satellite Launch Station.
"Given the observed level of activity noted, of a new tent, trucks, people and numerous portable fuel/oxidizer tanks, should North Korea desire -- it could possibly conduct its fifth satellite launch event during the next three weeks," it said.
DigitalGlobe said the type of activity was consistent with preparations observed before North Korea's failed launch of its Unha-3 missile in April.
Pyongyang insisted the April launch bid was aimed at putting a satellite in orbit, but the United States and United Nations denounced the mission as a disguised ballistic missile test.
The test put a halt to international efforts to engage the isolated nation, with the United States calling off plans to deliver badly needed food assistance.
The North is in the final stage of preparations for a launch after missile parts were transported to the launch site early this month, an unnamed senior military official told Yonhap news agency.
"(The South Korean military) is judging that there is high possibility of (the North's) firing off the missile between December and January of next year," the official was quoted as saying.
Any test in the next three weeks would cast a heavy cloud over South Korea's presidential election on December 19.
There have been widespread concerns in Seoul that the North would seek to influence the ballot by conducting a missile launch or provoking a border clash.
The Japanese Asahi Shimbun newspaper had reported last week that the US government had already warned Japan and South Korea that an imminent test was possible.
Last month, the US-Korea Institute at Johns Hopkins University said satellite images showed North Korea had conducted motor tests at the Sohae site to improve its long-range missiles.
Some analysts believe that a North Korean rocket, if successfully developed, could eventually reach the range to hit the United States. 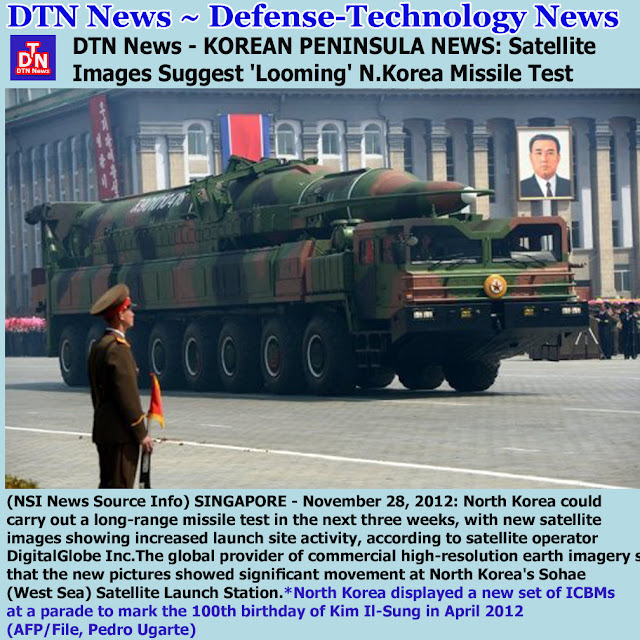 North Korea is known to have an inter-continental ballistic missile (ICBM) in development -- the Taepodong-2 -- but it has never been tested successfully.
Days after the failed April test, North Korea raised eyebrows by displaying what appeared to be a new set of ICBMs at a military parade to mark the 100th birthday of the North's late founder Kim Il-Sung.
But Western military analysts and UN sanctions experts concluded that the display models were simply mock-ups.