AFP
(NSI News Source Info) PESHAWAR, Pakistan - September 7, 2010: At least 19 people were killed and 45 wounded when a suicide bomber rammed his explosives-laden car into a police station in northwest Pakistan on Monday, destroying the building, 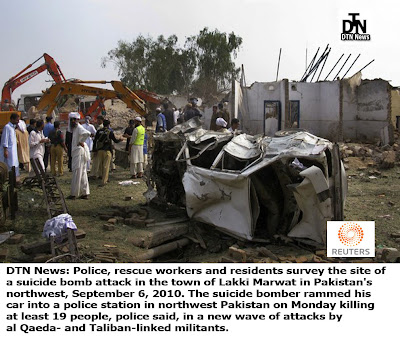 police said.
Nine policemen and four schoolchildren were among those killed by the attack in Lakki Marwat in Khyber Pakhtunkhwa province, not far from tribal areas that are a stronghold of the Taliban.
At least 110 people have been killed over the past week as militants step up their attacks across the country.
"Nineteen people have died in this suicide attack, the target was the police station," provincial information minister Mian Iftikhar Hussain told reporters in the regional capital Peshawar.
"Terrorists are regrouping, they need to be hit hard."
Four schoolchildren, aged between nine and 10 died in the massive explosion, police said.
"Three schoolboys and a girl died, they were waiting for their school van," district police chief Gul Wali Khan told AFP by telephone.
Some 20 policemen were among those wounded by the blast which destroyed the police station and damaged a nearby administrative building.
There were about 45 policemen inside the building when the bomber struck.
The police chief said rescue workers had recovered all those trapped under the rubble after the building collapsed.
Doctor Ghulam Ali, medical superintendent of Lakki Marwat's main hospital, told AFP by telephone that 17 bodies and 45 wounded had been brought to his hospital, which was also damaged in the blast.
Police said the bomber hit the back of the police station because the front and side walls of the building were heavily protected with sand bags.
Police cordoned off the whole area after the incident and launched a search operation to avert further attacks.
Local TV footage showed the destroyed building and shops and a mosque damaged by the blast.
Monday's attack is not the first to hit Lakki Marwat district.
In January a suicide bomber killed 99 people when he rammed his car into a crowd of men, women and children watching a volleyball tournament in Shah Hasan Khan village.
There was no claim of responsibility for the latest attack but the Pakistani Taliban has been blamed for similar suicide bombings.
The group Friday vowed to carry out further attacks inside Pakistan and against the United States and Europe after the US State Department added it to a blacklist of foreign terrorist organisations.
Militants have launched a series of attacks as Muslims mark the final days of the holy fasting month of Ramadan even as the country struggles to deal with massive flooding that has killed nearly 1,800 people and left millions reliant on aid handouts.
The recent wave of attacks were a reaction to the success of the army's anti-terror operations, foreign minister Shah Mehmood Qureshi said during a visit to Portugal.
"They (militants) are retaliating and they are attacking innocent citizens to create panic and to break the resolve that exists in the country," Qureshi said following a meeting in Lisbon with his Portuguese counterpart Luis Amado.
On Friday, a suicide bomber killed at least 59 people at a Shiite Muslim rally in Quetta, capital of the southwest province of Baluchistan.
That attack came just days after three suicide bombers killed 31 people and wounded hundreds more during a Shiite mourning procession in Lahore. The attack was subsequently claimed by the Pakistani Taliban.
Two small bombs went off in Lahore, in the east of the country, on Monday night but there were no reports of any casualties, police said.
Northwest Pakistan suffers from chronic insecurity, largely connected to the semi-autonomous tribal belt near Afghanistan, which Washington calls the most dangerous place on Earth and a global headquarters of Al-Qaeda.
More than 3,700 people have been killed in a series of suicide attacks and bomb explosions, many of them carried out by the Taliban and other Al-Qaeda-linked Islamist extremists, in Pakistan during the last three years. Also Monday, in Peshawar, an improvised explosive device slightly wounded one person, local police said.
Pakistan Related News

PESHAWAR, Pakistan (AFP) - At least 19 people were killed and 45 wounded when a suicide bomber rammed his explosives-laden car into a police station in northwest Pakistan on Monday, destroying the building, police said. More »

*Comprehensive daily news related to World Top Stories for the world of TODAY.