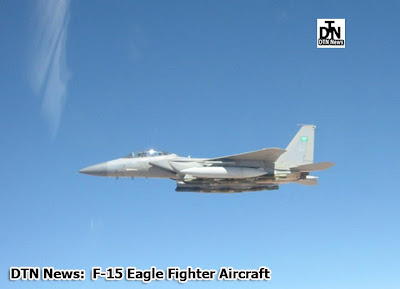 ultaneously denying reports that the country is coordinating with Israel over a possible strike against Iran’s nuclear sites.
“The Saudis are very worried about the growing power of Iran,” Arie Egozi, an aviation expert for the Israeli daily Yediot Ahronot, told The Media Line. “They want to protect their oil resources and other things. They have a very large air force and are upgrading their capabilities by installing new systems into their aircraft, mainly the Boeing F15s.”
The Royal Saudi Air Force (RSAF) upgrades include components to extend the life of the fighter bombers and highly-accurate target acquisition pods. The Goodrich Corporation announced it had been selected to upgrade Saudi Arabia’s fleet of 150 F-15 Eagle fighter aircraft with Grid-Lock flight controls. The retrofit of the aircraft ailerons, flaps, rudders and wing tips will bring them up to par with US Air Force F-15s, the company said.
“The RSAF recognized the improved lifecycle costs that the USAF is realizing on its flight control surfaces as a result of this innovative technology,” Marc Duvall, president of Goodrich Aerostructures, said in a statement.
The London-based Jane’s Defence Weekly reported that the deal was worth some $50 million. The announcement comes a few weeks after Saudi Arabia’s air force signed a deal with Lockheed Martin to provide Sniper advanced targeting pods (ATP) for its F-15s.
The pods will enable the pilot to detect and fire laser-guided weapons at a variety of targets on the ground. “We are now looking forward to deliver additional pods to support their urgent operational requirement for Sniper ATP capability,” said John Rogers, Saudi Sniper ATP program manager at Lockheed Martin Missiles and Fire Control, according to a Lockheed Martin news report.
Egozi said that the Sniper system was similar to one developed by Israel, which also maintains a number of F-15 squadrons.
“Of course the Saudi’s cannot buy from Israel, so they bought this system from the United States and they have upgraded immensely the capabilities of these aircraft,” the aviation expert said. Mustafa Alani, a military analyst at the Gulf Research Centre in Dubai, argued that the main impetus behind the RSAF’s efforts to upgrade its strike fleet is the threat posed to the region by a nuclear-armed Iran.
“Any war with Iran will be an air force and missile war, so Saudi Arabia has to enhance its air force's capabilities,” Alani was quoted as saying in Jane’s. “Saudi procurement strategies have been focused on acquisition of the most advanced defense technologies so that they can be interoperable with the US and this is the latest evidence of that.”
Alani added that the US was allowing the kingdom to pay for the upgrade with US military grant money because it didn’t want to lose a lucrative market to the Europeans and Russians, allowing the RSAF to turn their F-15s into a “serious aircraft and not a symbolic one.”
Egozi said the Saudi air force was hardly “symbolic,” and was considered to be one of the most potent in the Middle East. He added that upgrading existing aircraft instead of purchasing newer platforms was common in all modern air forces.
“There is no point in buying, even if you have the money, a new platform when the existing one is good as long as you upgrade it with the new systems,” he argued.
“It is a normal procedure which is being done by the Israeli Air Force, the American Air Force and by all the most advanced air forces in the world and the Saudi’s are doing the same.” Both Israel and Saudi Arabia feel threatened by a nuclear-armed Iran. The Sunday Times has reported that a deal was reached between Israel and Saudi Arabia in which Riyadh would turn a blind eye to an Israeli air strike on Iran that would entail Israeli jets flying over Saudi air space. Saudi Arabia has denied the reports as “false and slanderous.”
According to Egozi, the Saudi’s air defense system could pose a formidable obstacle to any strike over its territory. “They have the upgraded AWACS (airborne warning radar) which can detect the aircraft approaching Saudi air space,” he said. “They have the F-15 fleets. It is an air power which any country should take into account.”
“I don’t know about this report of coordination between Israel and Saudi Arabia, but the Saudi Air Force is a force which you have to take into consideration in any context in the area,” Egozi said. “The Saudis are investing all of their time in order to keep their capabilities high, but I think their main concern right now is Iran.”
*This article is being posted from Toronto, Canada By DTN News ~ Defense-Technology News, contact: dtnnews@ymail.com
Related News:
**"Saudi airspace open for Iran attack"
**"US, Israel would harm all ME states"

DTN News: We will Not Give Israel Air Corridor For Iran Strike Says Saudi Arabia 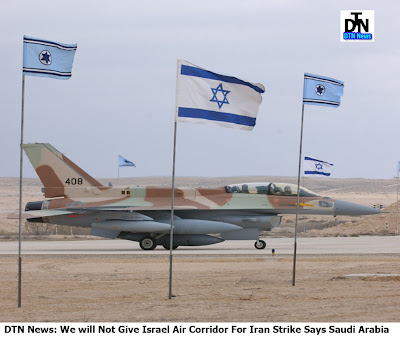 ss through its airspace en route to a possible strike of Iran's nuclear facilities, a member of the Saudi royal family said Saturday, denying an earlier Times of London report.
Earlier Saturday, the Times reported that Saudi Arabia has practiced standing down its anti-aircraft systems to allow Israeli warplanes passage on their way to attack Iran's nuclear installations, adding that the Saudis have allocated a narrow corridor of airspace in the north of the country.
Prince Mohammed bin Nawaf, the Saudi envoy to the U.K. speaking to the London-based Arab daily Asharq al-Awsat, denied that report, saying such a move "would be against the policy adopted and followed by the Kingdom."
According to Asharq al-Awsat report, bin Nawaf reiterated the Saudi Arabia's rejection of any violation of its territories or airspace, adding that it would be "illogical to allow the Israeli occupying force, with whom Saudi Arabia has no relations whatsoever, to use its land and airspace."
Earlier, the Times quoted an unnamed U.S. defense source as saying that "the Saudis have given their permission for the Israelis to pass over and they will look the other way.
"They have already done tests to make sure their own jets aren’t scrambled and no one gets shot down. This has all been done with the agreement of the [U.S.] State Department."Once the Israelis had passed, the kingdom’s air defenses would return to full alert, the Times said.Despite tensions between them, Israel and Saudi Arabia share a mutual hostility to Iran.
"We all know this. We will let them [the Israelis] through and see nothing,” the Times quoted a Saudi government source as saying.
According to the report, the four main targets for an Israeli raid on Iran would be uranium enrichment facilities at Natanz and Qom, a gas storage development at Isfahan and a heavy-water reactor at Arak.
Secondary targets may include a Russian-built light water reactor at Bushehr, which could produce weapons-grade plutonium when complete.Even with midair refueling, the targets would be as the far edge of Israeli bombers' range at a distance of some 2,250km. An attack would likely involve several waves of aircraft, possibly crossing Jordan, northern Saudi Arabia and Iraq.
Aircraft attacking Bushehr, on the Gulf coast, could swing beneath Kuwait to strike from the southwest, the Times said.
Passing over Iraq would require at least tacit consent to the raid from the United States, whose troops are occupying the country. So far, the Obama Administration has refused this.
On Wednesday the United Nations passed a fourth round of sanctions against Iran in an attempt to force it to stop enriching uranium. But immediately after the UN vote, Iranian President Mahmoud Ahmadinejad vowed the nuclear program would continue.
Israel hailed the vote – but said sanctions were not enough and Prime Minister Benjamin Netanyahu has refused to rule out a raid.
Netanyahu's predecessor, Ehud Olmert, is believed to have held secret meetings with high-ranking Saudi officials over Iran.
*This article is being posted from Toronto, Canada By DTN News ~ Defense-Technology News, contact: dtnnews@ymail.com
People who read this article also read:

Will Israel's raid on Gaza flotilla hurt bid for Iran nuclear sanctions?Haaretz
Posted by DEFENSE NEWS at 10:29:00 PM No comments: