Although an overall intelligence budget was not released last year, then-Director Dennis C. Blair told reporters in a teleconferencethat the overall budget was $75 billion. At that time, the officially released National Intelligence Program budget was $49.5 billion.

The disclosure Thursday that intelligence spending had risen to $80.1 billion, an increase of nearly 7 percent over the year before and a record high, led to immediate calls for fiscal restraint on Capitol Hill.

The new total is more than double what was spent in 2001, noted Sen. Dianne Feinstein (D-Calif.), chairman of the Senate Select Committee on Intelligence. However, that was before the attacks of Sept. 11, 2001, prompted major shifts by the intelligence community.

"I intend to identify and remove any waste and unnecessary duplication in the intelligence budget and to reduce funding for lower-priority activities," Feinstein said in a statement. She added: "It is clear that the overall spending on intelligence has blossomed to an unacceptable level in the past decade."

Rep. Silvestre Reyes (D-Tex.), chairman of the House Permanent Select Committee on Intelligence, joined Feinstein in calling for fiscal restraint on the part of the intelligence community. He said that, along with Feinstein and her vice chairman, Sen. Christopher S. Bond (R-Mo.), he had put cost controls on major systems, such as intelligence satellites, and looked forward to helping to "eliminate the waste, fraud and irresponsible use of taxpayer dollars."

The Washington Post series "Top Secret America" described the growth and spread of the U.S. intelligence community since 2001. In an interview for the series, Gates said he didn't think the intelligence bureaucracy and its contractors had grown too large to manage. But he added: "Nine years after 9/11, it makes sense to sort of take a look at this and say, 'Okay, we've built tremendous capability, but do we have more than we need?' "

Gates has commissioned a major review of the Pentagon budget, with a goal of finding $100 billion in excess spending over five years, thus reducing the growth of the Defense Department budget to about 2 percent annually excluding the costs of the wars in Iraq and Afghanistan.

CIA Director Leon Panetta told The Post that he knew intelligence spending faced reductions and that he was working on a five-year plan for his agency.

Steven Aftergood, who publishes the Secrecy News blog for the Federation of American Scientists, has pushed for disclosure of the top line intelligence budget for years. He said Thursday that the release of the new figure permits the government "to speak realistically about the level of intelligence spending."

He also said it took 30 years to get to this point, after convincing skeptics that the release of the figure would not harm national security. "I don't see now an avalanche of intelligence disclosures," he said. 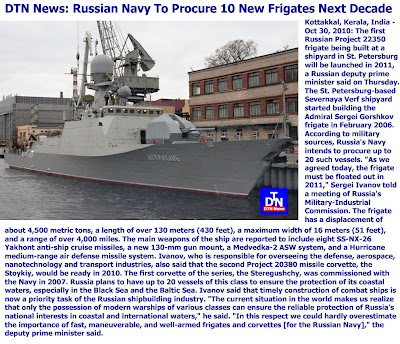 Later on Friday the first Admiral Gorshkov-class Project 22350 frigate will be floated out at the Severnaya Verf shipyard in St. Petersburg. The ship will be able to execute long-range strike, anti-submarine and escort missions in remote areas.

The next Gorshkov-class frigate, the Admiral Kasatonov, is under construction and expected to be launched in 2012.

"In the next 10 years the Russian Navy may receive up to 10 frigates of this project [22350]. There is no doubt that Severnaya Verf has sufficient capacity for this," the source said.

The Russian Navy needs between 20 and 30 such frigates, which will be the 21st century's main ocean-going surface ship. 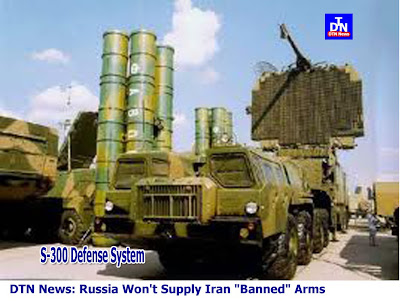 However, the head of the state-owned defense industry corporation, Rosoboronexport, has not ruled out any possible negotiations with Iranian officials that fall outside the U.N. Security Council’s military sanctions.

"If Iran orders equipment that does not fall under the sanctions, we will negotiate. Supply of the arms from this list is out of the question," chief executive Anatoli Isaikin said.

He also disclosed that Rosoboronexport supplies arms to several Latin American countries, as it is the only Russian company allowed to export weapons, dual-use products and military-related services.

Diplomats see Rosoboronexport’s announcement as an effort to mend relations with Tehran, which has come under attack after Moscow scrapped a defense deal to deliver S-300 defense systems to the Islamic Republic.

The scrapping of the deal last month in the wake of U.N. Security Council sanctions sparked Iranian ire over the matter. Later, Moscow said it would repay $166.8 million that it had taken from Iran for the deal.

Isaikin further said that his company had been supplying arms and other services to more than 70 countries and supervises 700 Russian arms producers along with it. Its net worth is more than $60 billion.

He went on to say that Russia would export a total of $10 billion of arms this year.

Russia's state-run arms exporter Rosoboronexport said on Thursday it was ready to discuss the delivery to Iran of arms that fall outside UN sanctions.

"Rosoboronexport strictly complies with the UN Security Council's resolutions and the Russian President's decree on sanctions against Iran," Rosoboronexport head Anatoly Isaykin said. "But if we receive orders for arms that are not included in the list of sanctions, we will hold discussions on the matter."

"There is no an absolute taboo on this," he added.

In September, Moscow banned the sale of S-300 air defense systems and other arms to Tehranfollowing a fourth round of UN Security Council sanctions against Iran over its nuclear program.

The contract to supply Iran with the missile system, one of most effective in existence, was signed at the end of 2007. Russia was to supply five battalions of S-300PMU-1 to Tehran, worth $800 million.

Russia is currently in talks with Tehran over compensation payments for the cancellation of the contract.

DTN News: US Money For Afghanistan Falls Into “Black Hole”

Source: Boris Volkhonsky Oct 29, 2010 16:11 Moscow Time - The Voice of Russia
(NSI News Source Info) MOSCOW, Russia - October 30, 2010: The US Special Inspector General’s Office for Afghanistan Reconstruction (SIGAR) has published a comprehensive audit report of US spending in Afghanistan since the beginning of the war against the Taliban in 2001. 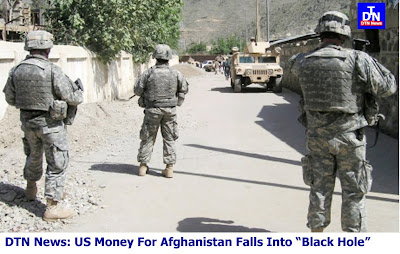 The report states that over that period about $55 billion have been spent on rebuilding Afghanistan, but tracking how the money was spent is extremely difficult. During the 2001-2009 period some $17.7 bn were given to 7,000 contractors. But since the three main agencies in charge of the process – the Department of Defense, the State Department and the US Agency for International Development (USAID) – do not coordinate their efforts with each other, and even then the coordination within the three agencies is very poor, it is almost impossible to say where exactly the money went.

What is even more difficult is to track spending prior to 2007, because the data available for analysis was too poor.

In an accompanying statement released on Wednesday Special Inspector General for Afghanistan Arnold Fields said, "Navigating the confusing labyrinth of government contracting is difficult, at best," and added, “If we don't even know who we're giving money to, it is nearly impossible to conduct systemwide oversight.”

In fact, there is nothing new in the report that money in Afghanistan is falling into a ‘black hole’. A similar statement was made recently by US special envoy for Afghanistan and Pakistan Richard Hallbrooke who talked of an "ununified" effort by the US, the UN and hundreds of other countries and aid agencies in Afghanistan.

In the recent Transparency International report released earlier this week, Afghanistan tops the list of most corrupt nations, together with Myanmar, being second only to Somali.

So, there is no wonder that the money of US taxpayers is spent in such a way that the spending cannot be tracked. But the real question is “Cui prodest?” (“To whose benefit?”).

Not going into concrete figures and names of particular contractors, it is enough to mention several houses built for the military, but unused ever since they were built. Or, the money spent on the anti-drug trafficking with an effect of drug production and drug trafficking sky-rocketing after the fall of the Taliban.

This, and not the speculation of the terrorist threat from the undefeated Taliban, makes it virtually impossible to start the withdrawal of US-led NATO coalition troops from Afghanistan in 2011, as Barack Obama has promised. And this explains why the US military are so eager to stay in Afghanistan as long as they can, despite all the military and political losses. The ‘black hole’ is turning into a ‘gold mine’.

But what seems much more dangerous is not only the way of extracting additional money from US taxpayers, but also some indications that the US and NATO feel like involving other states more closely in their activities in Afghanistan. Recently NATO Secretary General Anders Fogh Rasmussen expressed a hope that Russia will take a more active part in the military operation there.

Some British newspapers published their commentaries saying that this might mean a direct Russian military involvement in Afghanistan, despite the ‘Afghan syndrome’ still strong among Russians after the infamous Soviet invasion.

A close analysis of what Russia did promise to NATO shows that Russian involvement will be limited to personnel training, expanding supplies over the transit route as an alternative to the Pakistani route which is becoming more and more volatile, and probably supply of some helicopters and other equipment.

As Russia’s Ambassador to NATO Dmitry Rogozin has said, “Maybe someone would like Russia to be “cannon fodder” for Afghanistan, but I think that those people should limit their appetites. Russian soldiers will stay where they should be, that is in Russia.”

It seems that the advice ‘to limit appetites’ acquires a broader meaning in view of the Special Inspector’s audit. And it makes Russian military involvement in Afghanistan even less likely.

France ready to build first Mistral warship for Russia in 2013

If Moscow and Paris sign a contract to build Mistral class helicopter carriers for Russia, the first warship may be built in 2013, a top manager of French STX Europe shipbuilder said on Friday.

INFOGRAPHICS:THE HISTORY AND SPECIFICS OF THE MOSCOW KREMLIN’S STARS

Russian and Indian troops completed a drill to kill a fictional terrorist leader in the Indian Himalayas as part of the Indra-2010 joint military exercises, which finished on Saturday.

The final stages of erecting the world's tallest statue of Jesus Christ have been put on hold until a larger crane arrives in the small Polish town of Swiebodzin, local radio reported.