CONTRACTS
NAVY
Lockheed Martin Corp., Lockheed Martin Aeronautics Co., Fort Worth, Texas, is being awarded a $237,740,000 modification to the previously awarded fixed-price-incentive-fee (firm target) F-35 Lightning II Joint Strike Fighter (JSF) Low Rate Initial Production IV contract (N00019-09-C-0010) for changes to the configuration baseline hardware or software resulting from the JSF development effort.  This modification increases the concurrency cap for the U.S. Marine Corps and United Kingdom short take-off vertical landing aircraft; Air Force and Netherlands conventional take-off and landing aircraft; and Navy carrier variant aircraft.  The concurrency cap establishes the threshold at or under which the contractor is obligated to incorporate government-authorized changes.  Work will be performed in Fort Worth, Texas, and is expected to span multiple years.  Contract funds in the amount of $222,600,000 will expire at the end of the current fiscal year.  This contract modification combines purchases for the Navy ($153,200,000; 64.5 percent); Air Force ($69,400,000; 29 percent); the United Kingdom ($8,200,000; 3.5 percent); and the Netherlands ($6,940,000; 3 percent).  The Naval Air Systems Command, Patuxent River, Md., is the contracting activity.

Vericor Power Systems, L.L.C., Alpharetta, Ga., is being awarded a $23,571,200 firm-fixed-price contract for the manufacture, testing, and delivery of 16 ETF40B marine gas turbine engines in support of the Landing Craft Air Cushion (LCAC) Service Life Extension Program (SLEP), and the repair/refurbishment of 16 output group modules for LCAC engines.  The LCAC engines are an integral part of the SLEP and are provided to the SLEP contractor as government-furnished equipment for installation into existing LCACs.  The SLEP will extend the service life of LCAC from 20 to 30 years; sustain/enhance craft capability; replace obsolete electronics; repair corrosion damage; reduce life cycle cost by improving reliability and maintainability; increase survivability; and establish a common configuration baseline.  The LCAC SLEP scope of effort includes repair and upgrade of the buoyancy box; gas turbine engine replacement (this contract); installation of a new skirt; installation of an integrated C4N equipment package; and accomplishment of selected craft alterations and repair work.  This contract includes options, which, if exercised, would bring the cumulative value of this contract to $60,717,056.  Work will be performed in Winnipeg, Manitoba, Canada, and is expected to complete by June 2013.  Contract funds will not expire at the end of the current fiscal year.  Naval Sea Systems Command is the contracting activity. (N00024-12-C-4154)

Lockheed Martin Corp., Lockheed Martin Aeronautics Co., Ft. Worth, Texas, is being awarded a $14,165,940 modification to a previously awarded cost-plus-award-fee contract (N00019-02-C-3002) to implement required design changes that allow coalition training operations for the Joint Strike Fighter Program.  Work will be performed at Orlando, Fla. (55 percent), Fort Worth, Texas (34 percent), and El Segundo, Calif. (11 percent).  Work is expected to be completed in December 2016.  No funds are being obligated at time of award.  Contract funds will not expire at the end of the current fiscal year.  The Naval Air Systems Command, Patuxent River, Md., is the contracting activity.

Precise Contracting*, Memphis, Tenn. (N40083-12-D-5006); Chief Electric*, Memphis, Tenn. (N40083-12-D-5007); R.L. Alvarez Construction*, Clarksville, Tenn. (N40083-12-D-5008); and EML*, Franklin, Tenn. (N40083-12-D-5009), are each being awarded a design-build multiple award construction contract for design, construction, and renovation of government facilities in the Naval Support Activity (NSA) mid-South area of responsibility (AOR).  The scope of work for the seed project is for energy enhancements to various buildings:  457, 768, 769, 784, 785, 791, 455, and 456.  The maximum dollar value, including the base period and two option years, for all four contracts combined is $10,000,000.  Precise Contracting is being awarded task order 0001 at $1,995,887 for energy enhancements to buildings 457, 768, 769, 784, 785, 791, 455, and 456 at NSA Mid-South, Millington, Tenn.  Work for this task order is expected to be completed by May 2013.  All work on this contract will be performed in Millington, Tenn.  The term of the contract is not to exceed 36 months, with an expected completion date of May 2015.  Contract funds in the amount of $2,025,887 are obligated on this award and will expire at the end of the current fiscal year.  This contract was competitively procured via the Navy Electronic Commerce Online website with 11 proposals received.  These four contractors may compete for task orders under the terms and conditions of the awarded contract.  The Naval Facilities Engineering Command, Midwest/Public Works Department Mid-South, Millington, Tenn., is the contracting activity.

The Boeing Co., St. Louis, Mo., is being awarded a $16,254,426 modification to a previously awarded firm-fixed-price, fixed-price-incentive-fee contract (N00019-09-C-0019) for aircraft armament equipment for the F/A-18 E/F and EA-18G aircraft, including jumper bundles, pylon attach fittings, sensor well covers, adaptors, and plyons.  Work will be performed in St. Louis, Mo., and is expected to be completed in May 2015.  Contract funds will not expire at the end of the current fiscal year.  The Naval Air Systems Command, Patuxent River, Md., is the contracting activity.

DEFENSE LOGISTICS AGENCY
Gentex Corp., Carbondale, Pa., was awarded a firm-fixed-price, sole-source contract with a maximum $21,600,000 for advanced combat helmets.  There are no other locations of performance.  Using services are Army, Navy, Air Force, and Marine Corps.  Type of appropriation is fiscal 2012 Defense Working Capital Funds.  The date of performance completion is July 31, 2013.  The Defense Logistics Agency Troop Support, Philadelphia, Pa., is the contracting activity (SPM1C1-12-C-0016).

*Nicolas Sarkozy is the biggest victim of Europe's debt crisis 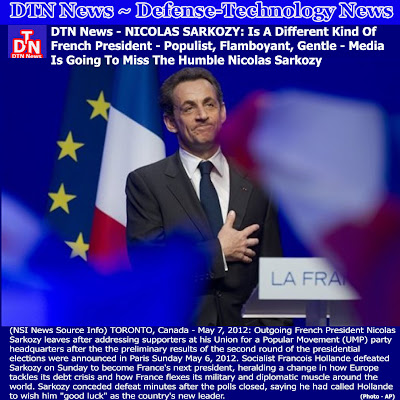 IRELANDPrime Minister Brian Cowen was the first victim of the debt crisis when his Fianna Fail party, which dominated political life for 80 years, lost a general election in February 2011.Cowen was replaced by Enda Kenny, of the conservative Fine Gael, who runs a coalition government that some months later was offered better repayment terms on a 2010 rescue package that many Irish took as a blow to national pride.PORTUGALPrime Minister Jose Socrates resigned in March 2011 after parliament rejected a fourth austerity package in less than a year.After conservatives won June elections, new Prime Minister Pedro Passos Coelho urged the country for "much courage" to face up to more belt-tightening.SLOVAKIAThe centre-right government headed by Iveta Radicova lost an October 2011 confidence vote she called to secure the country's backing to beef up the eurozone rescue fund, the European Financial Stability Facility (EFSF).Slovakia, whose approval was needed to strengthen the 17-nation bailout facility, finally approved it in a second vote won with the support of the opposition. On March 15, 2012, leftwing leader Robert Fico won the election.ITALYSilvio Berlusconi resigned on November 12, 2011 after losing his parliamentary majority.The 75-year-old media mogul, long a fixture of Italian politics, handed over to ex-European commissioner Mario Monti who set up a government of technocrats named to implement a tough anti-crisis austerity plan backed by the country's main parties.GREECESocialist Prime Minister George Papandreou stepped down on November 11, 2011 and was replaced by Lucas Papademos, a former deputy governor of the European Central Bank and ex-governor of the Greek central bank.
Papandreou faced fierce resistance to austerity measures demanded in return for fresh international loans to save Greece from bankruptcy.But Greek voters angry over austerity dealt a major blow to mainstream parties in weekend elections, making it unclear how a new government will be formed.SPAINSocialist Prime Minister Jose Luis Rodriguez Zapatero, facing a groundswell of discontent over successive austerity packages, decided to bring forward by four months to November 20 a vote initially scheduled for March 2012.The election was won by conservative Mariano Rajoy who is implementing tough austerity measures to ward off market pressure despite fierce opposition protests.NETHERLANDSPrime Minister Mark Rutte handed in his minority government's resignation on April 23, 2012 after failing to win support from the far-right to adopt a bid to reduce the country's public deficit to 3.0 percent as agreed under eurozone rules.An election has been scheduled for September 12.
*Link for This article compiled by Roger Smith from reliable sources Economic Times*Speaking Image - Creation of DTN News ~ Defense Technology News *This article is being posted from Toronto, Canada By DTN News ~ Defense-Technology News Contact:dtnnews@ymail.com ©COPYRIGHT (C) DTN NEWS DEFENSE-TECHNOLOGY NEWS
Read more »
Posted by DEFENSE NEWS at 6:20:00 PM No comments: 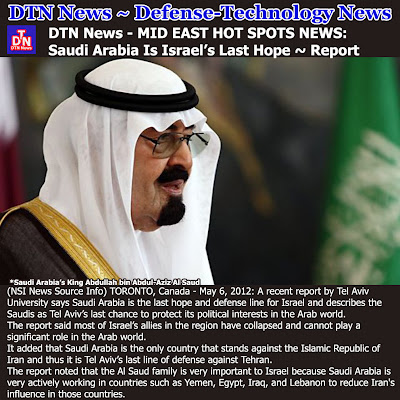 The report said most of Israel’s allies in the region have collapsed and cannot play a significant role in the Arab world. It added that Saudi Arabia is the only country that stands against the Islamic Republic of Iran and thus it is Tel Aviv’s last line of defense against Tehran.
The report noted that the Al Saud family is very important to Israel because Saudi Arabia is very actively working in countries such as Yemen, Egypt, Iraq, and Lebanon to reduce Iran's influence in those countries. Last March, a senior Egyptian cleric accused Saudi Arabia and Qatar of meddling in the internal affairs of other Muslim nations, calling the two states “Israel’s servants.” Sheikh Mohammad Alaedin Madhi said the two countries were implementing an Israeli-US plan in Syria.
He also criticized the Saudi-owned television network Al-Arabiya and the Qatar-owned broadcaster Al-Jazeera for "serving Israeli interests."
Moreover, in emails leaked by WikiLeaks and obtained by the Beirut-based newspaper Al-Akhbar, it was revealed that Saudi Arabia had reached out to the Mossad, which assisted the kingdom with, as Al-Akhbar reports, "intelligence collection and advice on Iran."
According to a source quoted in the emails, "Several enterprising Mossad officers, both past and present, are making a bundle selling the Saudis everything from security equipment (to) intelligence and consultation."
Related Stories: 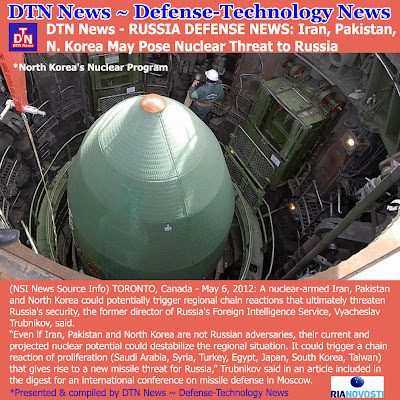 “Even if Iran, Pakistan and North Korea are not Russian adversaries, their current and projected nuclear potential could destabilize the regional situation. It could trigger a chain reaction of proliferation (Saudi Arabia, Syria, Turkey, Egypt, Japan, South Korea, Taiwan) that gives rise to a new missile threat for Russia,” Trubnikov said in an article included in the digest for an international conference on missile defense in Moscow.History shows that relations with unstable states and radical regimes can rapidly deteriorate and their nuclear potential could become a real threat to Russian national security, Trubnikov said.That is why Russia needs to work toward mutual understanding with the United States and NATO on the issue of missile defense, he said.
Russia's military leadership has for the first time acknowledged a nuclear threat from Iran and North Korea.
“The threat is always there, so we closely monitor the nuclear program developments of many countries," Army General Nikolai Makarov, the chief of the General Staff, told RT television.
"The analysis that we conducted together with the Americans confirms that, yes, there is a probability that the threat exists. And we agreed that it is necessary to create a missile defense system,” Makarov said. 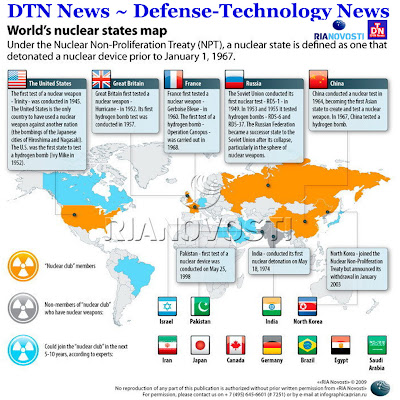 The Russian Defense Ministry has previously held that there is no nuclear threat to Europe and Russia from Iran and North Korea, because they do not have the capacity to build nuclear weapons or deliver them.
“Many countries that claim not to possess nuclear weapons do in fact have them,” Makarov said.
“Certainly, if it gets into the hands of extremists, it represents a threat to international security,” Makarov said.
He added that in order to counter these threats, Russia is ready to work together with other countries.
“Let's solve this problem. Let us work together to get rid of the threats that may arise, not only for Europe but for Russia because we too are part of Europe,” the general said.
North Korea has conducted two underground nuclear weapon tests, in 2006 and 2009.
Earlier in April South Korean media reported that intelligence indicated North Korea was preparing a third in a row underground nuclear test. The information was based on satellite photographs of North Korean test site, where underground nuclear test had been previously conducted.
U.S. and other Western countries suspect Iran of developing nuclear weapons under the guise of peaceful nuclear energy program. Tehran denies the charges, saying its nuclear program is aimed at meeting the country's electricity needs.