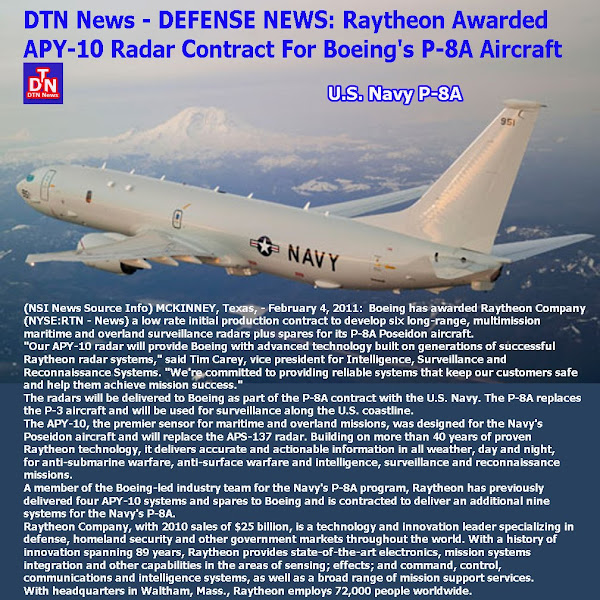 The radars will be delivered to Boeing as part of the P-8A contract with the U.S. Navy. The P-8A replaces the P-3 aircraft and will be used for surveillance along the U.S. coastline.

The APY-10, the premier sensor for maritime and overland missions, was designed for the Navy's Poseidon aircraft and will replace the APS-137 radar. Building on more than 40 years of proven Raytheon technology, it delivers accurate and actionable information in all weather, day and night, for anti-submarine warfare, anti-surface warfare and intelligence, surveillance and reconnaissance missions.

Raytheon Company, with 2010 sales of $25 billion, is a technology and innovation leader specializing in defense, homeland security and other government markets throughout the world. With a history of innovation spanning 89 years, Raytheon provides state-of-the-art electronics, mission systems integration and other capabilities in the areas of sensing; effects; and command, control, communications and intelligence systems, as well as a broad range of mission support services. With headquarters in Waltham, Mass., Raytheon employs 72,000 people worldwide.