Source: DTN News - - This article compiled by Roger Smith from reliable sources By Sue Book - Sun Journal Staff
(NSI News Source Info) TORONTO, Canada - November 14, 2010: The Joint Strike Fighter under development to replace many aircraft in all branches of the U.S. military appears to be landing late for training. 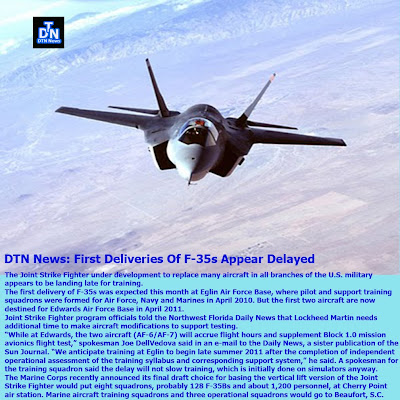 The first delivery of F-35s was expected this month at Eglin Air Force Base, where pilot and support training squadrons were formed for Air Force, Navy and Marines in April 2010. But the first two aircraft are now destined for Edwards Air Force Base in April 2011.

“While at Edwards, the two aircraft (AF-6/AF-7) will accrue flight hours and supplement Block 1.0 mission avionics flight test,” spokesman Joe DellVedova said in an e-mail to the Daily News, a sister publication of the Sun Journal.

“We anticipate training at Eglin to begin late summer 2011 after the completion of independent operational assessment of the training syllabus and corresponding support system,” he said.

A spokesman for the training squadron said the delay will not slow training, which is initially done on simulators anyway.

It does, however, give more credence to continued rumblings that difficulties with the plane’s development are making its entry into the military’s aircraft arsenal and its cost unpredictable.

A decision is expected in December and North Carolina’s politicians in Washington, Raleigh, and Craven County are lobbying for the other three operational squadrons for Cherry Point. Many fear the aircraft’s cost and the country’s economic difficulties will cut the number of planes bought and deal Cherry Point out of its share.

Delays officially announced in March 2010 put full production off until November 2015 and costs in March up by more than 25 percent. A Pentagon projection last week adds another 10 percent increase.

But Sen. Kay Hagan said last week, “This has been in the plans for quite awhile. I can’t imagine that we will not be able to fund this program.”

And Bloomberg Business News reported Nov. 5 that a Pentagon report on the aircraft’s development showed that all three variants of the plane are meeting key performance requirements.

Bloomberg also reported that fourth production contract recently signed by the Defense Department and Lockheed Martin shows the actual cost of building the F-35 to be about 25 percent below the cost now being projected by the Pentagon.

*This article is being posted from Toronto, Canada By DTN News ~ Defense-Technology News, contact: dtnnews@ymail.com
© Copyright (c) DTN News Defense-Technology News
*TO READ THIS ARTICLE ORIGINALITY, CLICK HERE FOR LINK.
DISCLAIMER STATEMENT
WHILST EVERY EFFORT HAS BEEN MADE TO ENSURE THE ACCURACY OF THE INFORMATION SUPPLIED HEREIN, DTN NEWS ~ DEFENSE-TECHNOLOGY NEWS CANNOT BE HELD RESPONSIBLE FOR ANY ERRORS OR OMISSIONS. UNLESS OTHERWISE INDICATED, OPINIONS EXPRESSED HEREIN ARE THOSE OF THE AUTHOR OF THE PAGE AND DO NOT NECESSARILY REPRESENT THE CORPORATE VIEWS OF DTN NEWS ~ DEFENSE-TECHNOLOGY NEWS.
Posted by DEFENSE NEWS at 10:00:00 AM No comments: 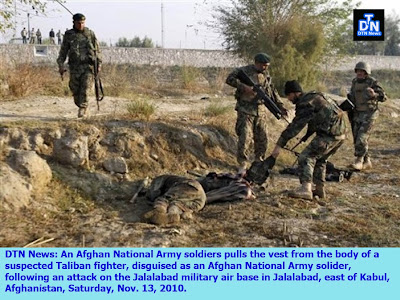 A prominent U.S. newspaper says Afghanistan's president wants the U.S. to reduce the visibility and intensity of its military operations in Afghanistan.

In an interview published Sunday in The Washington Post, Hamid Karzai says he also wants the U.S. to stop night raids that he says aggravate Afghans and could incite some people to join the Taliban insurgency. The newspaper reports the Afghan president is seeking veto power over the nighttime operations.

Mr. Karzai told the newspaper the time has come to "reduce the intrusiveness into the daily Afghan life." He said Afghans have become impatient with the presence of U.S. soldiers in their homes and armored vehicles on their roads.

Mr. Karzai told The Washington Post he hoped his candid remarks would help improve what he called a "grudging" relationship between the U.S. and Afghanistan.

The newspaper says the Afghan president talked about his deep skepticism of U.S. policy in Afghanistan, including last year's presidential election, which he said was manipulated by U.S. officials.

The Washington Post story says Mr. Karzai's comments come as U.S. officials are stressing the combat mission in Afghanistan will not end until 2014. The newspaper says U.S. officials are "playing down" the importance of July 2011, the date U.S. President Barack Obama has set to begin withdrawing U.S. troops from Afghanistan.

Comments made Sunday by the U.S. Special Representative for Afghanistan and Pakistan seemed to support that strategy, when Richard Holbrooke emphasized to journalists in Pakistan that "substantial combat forces" would not be phased out in Afghanistan until 2014.