Source: DTN News - - This article compiled by Roger Smith from reliable sources NDTV
(NSI News Source Info) NEW DELHI, India - June 5, 2011: If Sadhvi Ritambhara's presence at Baba Ramdev's anti-corruption fast threatened to break up civil society coalition, then the government's midnight police action helped paper over the sense of unease. In the aftermath of the police action, the civil society came together to express solidarity with Baba Ramdev and condemned the government. Divergent strands of civil society made it clear that the government's action was unacceptable, was against the Constitution and the basic tenets of democracy.

Government vs Baba Ramdev: Who's right? by ndtv
Setting aside all differences, civil society representatives came together to slam the government. They said that protests are allowed in a democracy, and that the police attack on the mass of sleeping protesters at Ramlila ground at night was highly condemnable. Anna Hazare condemned "the barbaric and unprovoked action of government" and described it as an "assault on democracy".
As an expression of unity, Anna Hazare and other civil society members of the joint Lokpal drafting committee have said that they will boycott Monday's meeting of the committee. Hazare has also said that he would undertake a day's fast in Delhi on Wednesday as a mark of protest against the brutal police action, as well as to put pressure on the government to act against corruption. "We condemn this action. This is a blot on humanity. This is like throttling democracy. We have decided that we will organise a day's fast on June 8. Wherever you may be, you may stage a fast. And pray to god to give wisdom to this government," the octogenarian Gandhian said.
The Mazdoor Kisan Shakti Sangathan (MKSS) has also condemned the forcible disbandment of Baba Ramdev's protest through police action. In a statement for the MKSS collective, Shankar Singh, Nikhil Dey, Lal Singh, Bhanwar Meghwanshi and Aruna Roy said: "The right to peaceful protest, irrespective of ideologies, individuals or issues, is fundamental to a functional democracy. The MKSS holds that plurality of views and their peaceful expression are signs of a healthy vibrant democracy, and must be protected."
Condemning the police action on supporters in the strongest terms, the Lokpal drafting committee co-chairman Shanti Bhushan said that the government's handling of Baba Ramdev's movement showed its desperation. For Bhushan, the police action in the dead of night were an eerie reminder of the Emergency days. The former law minister said that Prime Minister Manmohan Singh should "resign immediately" and "a caretaker government should be formed".
Anna Hazare and his team have also extended support to Ramdev's demand for an ordinance declaring illegally stashed Indian funds in foreign banks as national assets and for declaring the activity of taking away money through illegal means outside India as a serious crime.
In a statement, the India against Corruption platform, led by Anna Hazare, demanded that the Prime Minister should explain to the nation the reasons which provoked his government to issue orders for police action. "Last night's brutal assault of the government reminds one of 1975 Emergency. It is almost an Emergency-like situation. Today is June 5, the Sampoorn Kranti Diwas. People of this country rose against government injustice 35 years back. Time has come for the people to similarly rise against corruption," the statement read.
How The Ramdev Crisis Developed 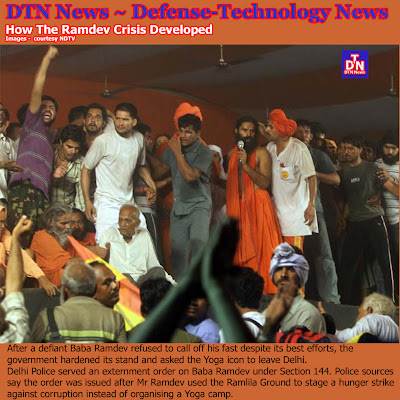 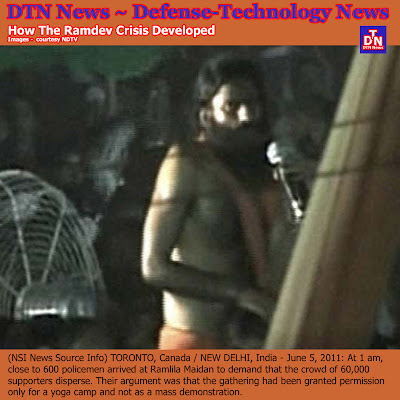 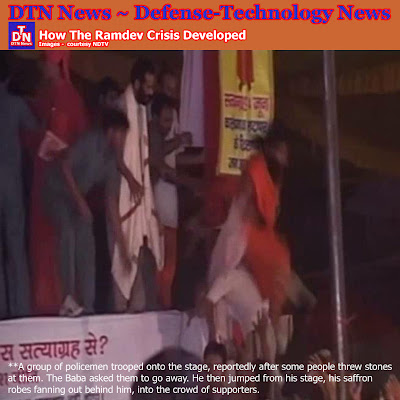 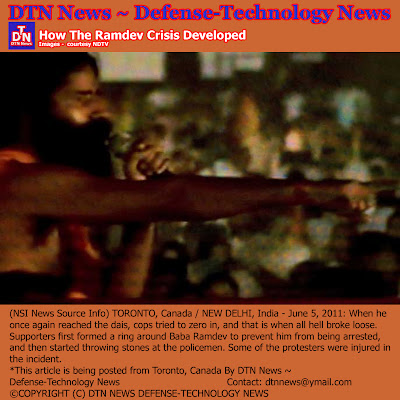 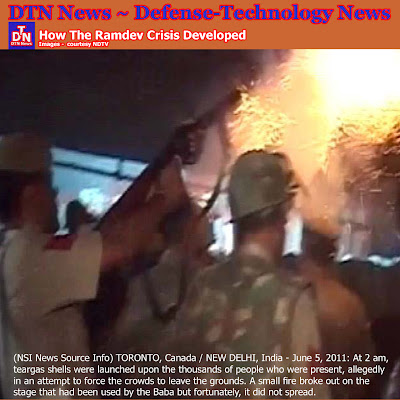 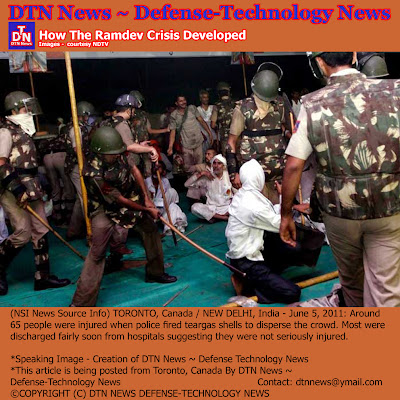 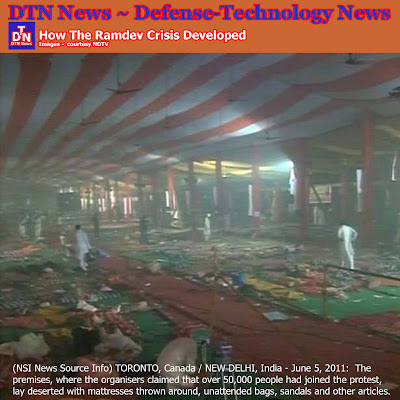 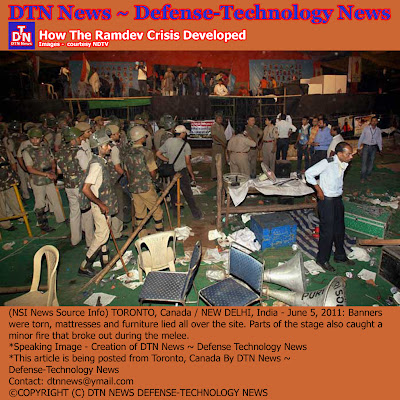 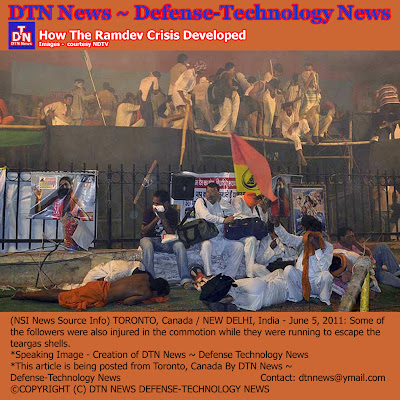 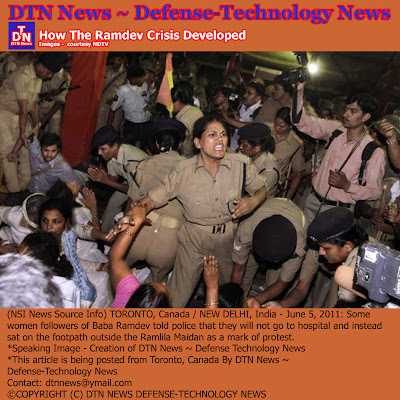 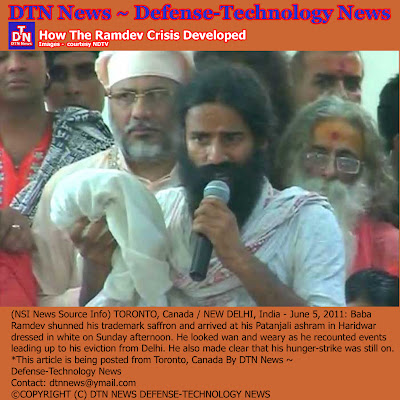 Source: DTN News - - This article compiled by Roger Smith from reliable sources, contribution from D V Gulati and Sanaya Hoon
(NSI News Source Info) TORONTO, Canada / NEW DELHI, India - June 5, 2011: When all negotiations reach an end, police swooped down on Baba Ramdev a little past midnight and arrested him after firing tear gas shells and resorting to lathicharge on his supporters to end hisone day-old indefinite hunger strike on corruption in India. The dramatic police action came after the government and the Swami Ramdev had accused each other the previous night of betrayal. 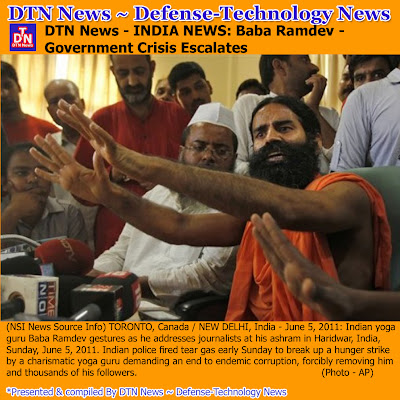 The drama that broke the midnight calm in the Ramlila Maidan a little after 1am unfolded when a large number of police personnel arrived at the protest venue where Ramdev was demanding fast action to bring back black money hidden in foreign tax havens such as Mauritius.
After day break, police removed all the remnants of Baba’s support by clearing his followers from the protest site amidst stiff resistance.
Delhi Police spokesman Rajan Bhagat said that Baba Ramdev was arrested as he was leaving the site.
Later sources said he was given permission to go out of Delhi and probably he went to Haridwar.
Earlier, home secretary GK Pillai had maintained that he was not arrested or detained, a point echoed by Delhi Police Commissioner BK Gupta, who also rushed to the spot.
Gupta said that there were some security concerns and that the permission for the yoga camp has been annulled. He said Ramdev’s supporters were throwing stones. Police did not use force besides using some tear gas, he added.
Ramdev’s main person, Tijarawala alleged that he has been “kidnapped” by police and he feared for his life. The spokesman appealed to the chief justice of India to intervene and ensure Ramdev’s safety and release.
The police withdrew the permission for his yoga camp and imposed prohibitory orders after what a senior police official said a political decision was taken to end the protest.
The previous night the government and Ramdev indulged in a blame game.
Union minister Kapil Sibal, who had negotiated with Ramdev, made public a letter written by his aide that the fast would be called off on Saturday evening if government gave written assurances on a legislation to bring back the black money from abroad ( Mauritius cited ) and stringent punishment to offenders.
Ramdev responded and said that the government has been involved in “betrayal and cheating” and promised not to talk to Sibal ever in his life. He said he will listen to the Prime Minister.
After mutual accusations, the government on late Saturday night sent a fresh letter of assurance on his demands and demanded him to end his fast.
In the midnight drama, that was enacted live in front of television cameras, Ramdev’s supporters, who were woken up from their sleep, protested against the police action.
Some elderly people swooned due to the impact of tear gas shelling resorted to by police. 30 of his supporters have been admitted to a nearby government hospital for treatment of injuries allegedly suffered during the police action.
Chaos and commotion prevailed when the police, including a contingent of the Rapid Action Force (RAF), arrived at the venue and approached Ramdev, who was sleeping on the specially-erected rostrum from where he was addressing his supporters throughout the day.
As news about Ramdev detain went viral, a large number of supporters, including women, formed a human cordon around him making the job of police difficult to approach him.
Some supporters carried Baba Ramdev, who jumped from the dias, on their shoulders and that was the last that he was seen on television screens before he was removed from the place and arrested.
Earlier, Ramdev was seen appealing to the supporters to remain calm and sought to pacify them while telling them not to use any kind of violence.
There was a minor fire when one of the tear gas shells emitted spark while falling near the stage.
In his address to the supporters, Ramdev appealed to Prime Minister Manmohan Singh to allow him to be arrested during daytime.
“Why am I being arrested without any information, at night? I appeal to people to maintain calm…,” Ramdev told the his large number of followers.
He also appealed the people of Delhi to gather in large numbers to the protest venue.
A group of Baba Ramdev supporters threw pots, tripods and mike stands on cops to prevent them from coming close to the stage. The crowd dispersed from the stage after police fired tear gas shells. People were seen vacating the dais and the surrounding area after tear gas enveloped the whole area.
The supporters also claimed that Baba alongwith Acharya Bala Krishnan and Jaydeep Arya, head of Bharat Swabhiman Manch, were arrested.

They also said Swami Sampoornanand, who is second in command, has taken charge of the agitation and has asked people to gather at Jantar Mantar. Banners were torn and mattresses and furniture lay all over the Ramlila Maidan that resembled a war zone after the police action.
The Ramlila ground, the venue of the fast was booked for 20 days by Baba Ramdev for yoga camp but was turned as the venue for his “Satyagraha” movement.
Large number of people were leaving the spot, some were seen having serious talks with the policemen that why they have taken such an action when their protest was peaceful and not having resort to any violence.
Some of the supporters refused to leave the venue saying they will not move till they are asked to do so from Baba Ramdev.
*Link for This article compiled by Roger Smith from reliable sources
contribution from D V Gulati and Sanaya Hoon
*Speaking Image - Creation of DTN News ~ Defense Technology News
*This article is being posted from Toronto, Canada By DTN News ~ Defense-Technology News
Contact:
dtnnews@ymail.com