Source: DTN News - - This article compiled by Roger Smith from reliable sources Telegraph U.K.
(NSI News Source Info) TORONTO, Canada - July 17, 2011: Barack Obama met the Nobel Prize laureate for about 45 minutes on Saturday, praising him for embracing non-violence while reiterating that the US did not support independence for Tibet. 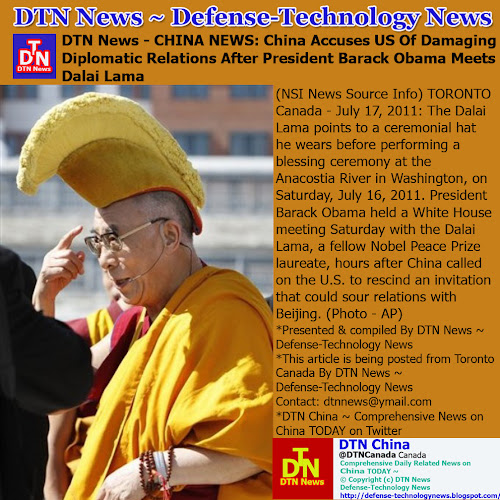 China, which accuses the exiled Tibetan spiritual leader of being a separatist who supports the use of violence to set up an independent Tibet, said Obama's meeting had had a "baneful" impact.

"We demand the US side to consider seriously China's stance, to immediately adopt measures to wipe out the baneful impact, to stop interfering in China's internal affairs and to cease to connive and support anti-China separatist forces that seek 'Tibet independence'."

A statement on China's foreign affairs ministry website said that the Vice Foreign Minister had "urgently summoned" Robert S. Wang, the Charge d'Affaires at the U.S. Embassy in Beijing, to lodge China's objections:

"China expresses its strong indignation and resolute opposition. Tibet is an inseparable part of China and Tibetan issues are purely an internal matter for China."

The Dalai Lama denies China's accusations, saying he wants a peaceful transition to autonomy for the remote Himalayan region, which China has ruled since 1950, when Chinese troops marched in.

The White House said in a statement that the Dalai Lama told Obama he was not seeking independence for Tibet and hoped that "dialogue between his representatives and the Chinese government can soon resume."

Obama's meeting came at an especially sensitive moment, with leaders in Washington at odds over how to raise the $14.3 trillion US debt ceiling in time to avoid default.

China holds more than $1 trillion in US Treasury debt and would be particularly exposed should Congress fail to reach a deal by Aug. 2. A US default could rocket up interest rates, sink the value of the US dollar and hurt the global economy.