Source: DTN News - - This article compiled by Roger Smith from reliable sources Photonics
(NSI News Source Info) TORONTO, Canada - January 20, 2011: Infrared supercontinuum laser technology could soon help protect military helicopters from heat-seeking missiles designed to home in on IR radiation emitted by a helicopter’s engine. Built with off-the-shelf telecom fiber optics, the laser technology operates in the mid- and longer IR wavelengths. Because it emits such a broad spectrum of light, it can jam missile sensors from a distance of 1.8 miles. 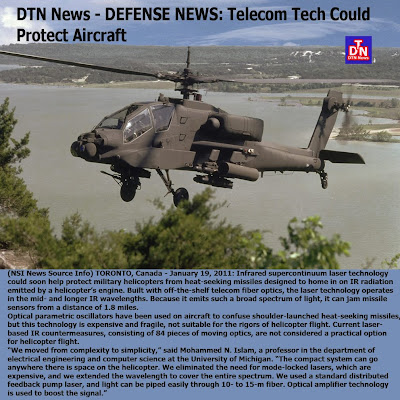 Optical parametric oscillators have been used on aircraft to confuse shoulder-launched heat-seeking missiles, but this technology is expensive and fragile, not suitable for the rigors of helicopter flight. Current laser-based IR countermeasures, consisting of 84 pieces of moving optics, are not considered a practical option for helicopter flight.

“We moved from complexity to simplicity,” said Mohammed N. Islam, a professor in the department of electrical engineering and computer science at the University of Michigan. “The compact system can go anywhere there is space on the helicopter. We eliminated the need for mode-locked lasers, which are expensive, and we extended the wavelength to cover the entire spectrum. We used a standard distributed feedback pump laser, and light can be piped easily through 10- to 15-m fiber. Optical amplifier technology is used to boost the signal.”

Islam and his team created an all-fiber integrated supercontinuum laser that provides up to 10.5-W time-averaged power with a continuous spectrum from approximately 0.8 to 4 µm, according to their report in the IEEE Journal of Selected Topics in Quantum Electronics, March/ April 2009. They stated that the laser is generated by a combination of standard single-mode fibers and fluoride fibers pumped by a laser diode-based cladding-pumped fiber amplifier system. They also demonstrated that the output of the supercontinuum laser pulse pattern can be adjusted by directly modulating the seed laser diode and controlling the amplifier gain with a signal feedback technique.

“This is an all-fiber integrated laser with no moving parts. It is reliable, rugged and easy to maintain. The off-the-shelf components from telephone networks are relatively inexpensive and are based on a proven technology, Islam said.”

Reliability, relatively low cost and a basis in proven technology are attractive qualities to the US Department of Homeland Security, which has been looking for better ways to protect commercial and military aircraft from shoulder-launched missile attacks. The laser system is being created at the university and at Islam’s spin-off company, Omni Sciences Inc. It is being commercialized by the company, which recently received a total of $1 million in grants from the US Army and DARPA to build a second-generation prototype, according to a press release from the university.

A second-generation prototype now in development is expected to have increased power and to be smaller and more rugged. Islam and his team are working to bring down the weight of the system from 25 to 10 lb or lower. “It is easy to scale up the power of the laser and to increase repetition rate and pump power with no real change in architecture,” he said.

Scientific hurdles include the need to expand the long wavelength and increase bandwidth, Islam said. “The supercontinuum laser is a platform technology and is very flexible for a wide range of applications.” These applications could include monitoring at national borders, active remote sensing of natural gas leaks, and, in the medical field, destroying harmful fats and lipids in the human body in the fight against Type 2 diabetes.
*This article is being posted from Toronto, Canada By DTN News ~ Defense-Technology News, contact: dtnnews@ymail.com 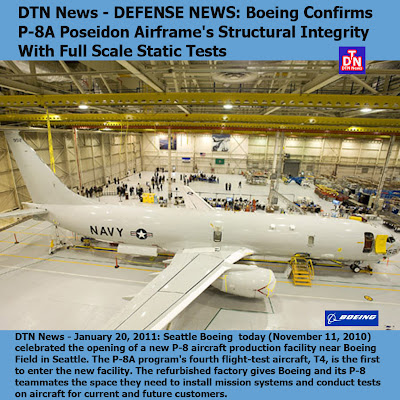 “The structure performed as we expected throughout testing, allowing us to efficiently expand the P-8A’s flight-test envelope,” said Chuck Dabundo, Boeing vice president and P-8 program manager. “Our static test plan was successful thanks to the combined efforts of Boeing’s design, analysis, and test teams and our U.S. Navy customer.”

S1 -- the program’s full-scale static ground-test vehicle -- underwent 154 different tests in which it sustained loads equal to or greater than those expected to occur during operational flights, with no failure of the primary structure. During 74 of the tests, the airframe was subjected to 150 percent of the highest expected flight loads. More than 4,000 installed strain gages and calibrated parts captured data for analysis.

The Navy plans to purchase 117 of the P-8A anti-submarine warfare, anti-surface warfare, intelligence, surveillance and reconnaissance aircraft to replace its P-3 fleet. Initial operational capability is planned for 2013.

A derivative of the Boeing Next-Generation 737-800, the P-8A Poseidon is built by a Boeing-led industry team that includes CFM International, Northrop Grumman, Raytheon, Spirit AeroSystems, BAE Systems and GE Aviation.

A unit of The Boeing Company, Boeing Defense, Space & Security is one of the world's largest defense, space and security businesses specializing in innovative and capabilities-driven customer solutions, and the world's largest and most versatile manufacturer of military aircraft. Headquartered in St. Louis, Boeing Defense, Space & Security is a $34 billion business with 68,000 employees worldwide. Follow us on Twitter: @BoeingDefense.

The Indian government cancelled the initial tender, won by the European Aeronautic Defense and Space Company (EADS) at the beginning of 2010, saying the A330 MRTT aircraft was too expensive. 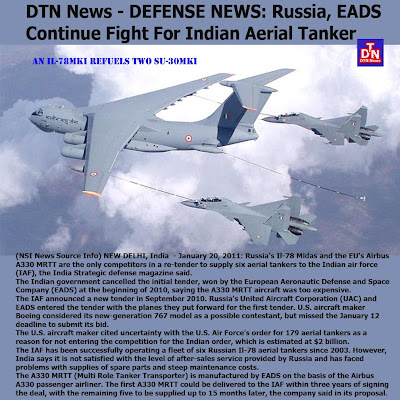 The IAF announced a new tender in September 2010. Russia's United Aircraft Corporation (UAC) and EADS entered the tender with the planes they put forward for the first tender. U.S. aircraft maker Boeing considered its new-generation 767 model as a possible contestant, but missed the January 12 deadline to submit its bid.

The U.S. aircraft maker cited uncertainty with the U.S. Air Force's order for 179 aerial tankers as a reason for not entering the competition for the Indian order, which is estimated at $2 billion.

The IAF has been successfully operating a fleet of six Russian Il-78 aerial tankers since 2003. However, India says it is not satisfied with the level of after-sales service provided by Russia and has faced problems with supplies of spare parts and steep maintenance costs.

The A330 MRTT (Multi Role Tanker Transporter) is manufactured by EADS on the basis of the Airbus A330 passenger airliner. The first A330 MRTT could be delivered to the IAF within three years of signing the deal, with the remaining five to be supplied up to 15 months later, the company said in its proposal.