AFP Hazel Ward
(NSI News Source Info) JERUSALEM, Israel - July 11, 2010: Israel on Sunday vowed to prevent a Libyan aid ship from running the Gaza blockade after it appeared to be heading for the besieged enclave despite a flu 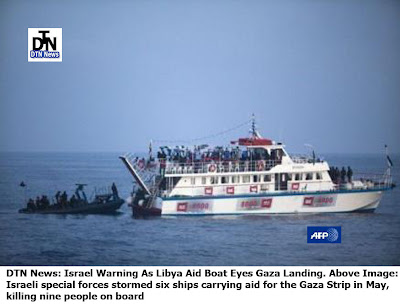 rry of diplomatic efforts to divert it to Egypt.
"Israel will not let the boat reach Gaza," minister without portfolio Yossi Peled told Israel's public radio a day after the 92-metre (302-foot) freighter set sail from the Greek port of Lavrio, south of Athens.
Allowing boats to reach the Hamas-run Gaza Strip without being checked would have "very serious consequences" for Israel's security, he said.
There was confusion over the ship's destination on Sunday -- with organisers saying it was staying the course for Gaza, despite diplomatic reassurances from Greece that it was headed for the Egyptian port of El-Arish.
Israel's Defence Minister Ehud Barak said the attempt to reach Gaza, which has been subjected to an Israelinaval blockade for the last four years, was an "unnecessary provocation."
"The goods can be transferred to the Gaza Strip through Ashdod port after being checked," a statement from his office said late on Saturday.
"However, we will not allow the entry of arms, weapons or anything which will support fighting into Gaza. We recommend that the organisers either let the ship be escorted by navy vessels to Ashdod port (in southern Israel) or that is sails directly to the port of El-Arish" in Egypt.
Barak's office had earlier said that the defence minister spoke with Egyptian intelligence chief Omar Suleiman and asked "if Egypt would agree to accept the boat at the port of El-Arish."
It was not immediately clear if Egypt had acceded to Barak's request but the ship's agent and the Greek foreign ministry had on Saturday assured Israel that the Moldova-flagged vessel, chartered by a charity linked to Libyan leader Moamer Kadhafi, was heading for El-Arish.
The Kadhafi Foundation, headed by Seif al-Islam Kadhafi, the son of the Libyan leader, insisted however that the ship, loaded with 2,000 tonnes of foodstuff and medications and a crew comprising six Libyans, a Moroccan, a Nigerian and an Algerian, had not changed its course.
"The ship is heading toward Gaza as planned," executive director Youssef Sawan told AFP by telephone from Tripoli, saying the mission was "purely humane."
His comments were confirmed by Arab Israeli parliamentarian Ahmed Tibi.
"The ship is heading into Gaza as originally planned," said the MP who is in touch with the charity.
"The foundation confirmed to me that the boat will try to reach Gaza's port to unload its cargo" in a bid to break the blockade, he said.
Over the last few days, Israel's top diplomat Avigdor Lieberman has been talking with his counterparts in Greece and Moldova in a bid to encourage the ship to call off its mission, a statement from his office said.
"The foreign ministry believes that due to these talks, the ship will not reach Gaza," it said.
The Libyan mission comes six weeks after a disastrous Israeli naval raid on another aid flotilla which left nine Turkish nationals dead and provoked a major diplomatic crisis with Ankara.
Global pressure over the incident has since forced Israel to significantly change its policy on Gaza, and now it only prevents the import of arms and goods that could be used to build weapons or fortifications.
Israel had even approached UN chief Ban Ki-moon with a request asking the international community "to exert its influence on the government of Libya" to prevent the ship from going to Gaza, media reports said.
Related content
*Gaza aid ship sets sail from Greece
*Gaza aid ship to dock in Egypt
*Israel foils Libyan plans to sail aid ship to Gaza
*Related Hot Topic: Gaza
Posted by DEFENSE NEWS at 5:59:00 AM No comments:

announced that its Bell 412 full-mission simulator has been certified to Level D, the highest qualification for flight simulators, by India's Directorate General Civil Aviation (DGCA) and the European Aviation Safety Agency (EASA).
The CAE-built full-mission helicopter simulator at HATSOFF features CAE's roll-on/roll-off cockpit design, which enables cockpits representing various helicopter types to be used in the simulator. The first training program HATSOFF is offering is for operators of the Bell 412 helicopter. Additional cockpits for the Indian army/air force variant of the HAL-built Dhruv, the civil variant of the Dhruv, and the Eurocopter Dauphin will be added to the HATSOFF training center over the next year.
The HATSOFF training center, located near HAL's headquarters in Bangalore, also features multimedia classrooms, computer-based training, brief/debrief facilities, and a training management information system. The full-mission simulator features a common motion system, vibration platform, and visual display system, along with the four separate cockpit modules that can be used in the full-mission simulator. When a cockpit is not used in the full-mission simulator, it will be used as a fixed-based flight training device (FTD).
"HAL and CAE are very proud of achieving Level D certification, which is the highest performance rating given for flight training equipment, from both the DGCA and EASA," says Chandra Dat Upadhyay, chief executive officer of HATSOFF. "The HATSOFF training center is the first helicopter training center in India certified to Level D, and we are excited to begin offering simulation-based training that will prove to be one of the best approaches for improving safety, operational efficiency, and mission readiness."
Posted by DEFENSE NEWS at 5:55:00 AM No comments: