Source: DTN News - - This article compiled by Roger Smith from reliable sources Boeing (NSI News Source Info) TORONTO, Canada - February 24, 2012: The Boeing [NYSE: BA] KC-46 Tanker program today marked the first anniversary of receiving a U.S. Air Force contract to build the next-generation aerial refueling tanker, the KC-46A. Over the past year, the program has completed key milestones in support of the design and development phase on or ahead of schedule, and is now preparing for a Preliminary Design Review (PDR) in March. 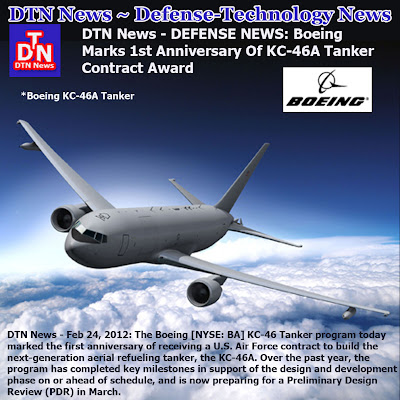 "The KC-46 program is on a good path. Boeing's performance thus far has been solid," said Maj. Gen. Chris Bogdan, KC-46 Program Executive Officer, U.S. Air Force. "Our commitment is to deliver the KC-46A to the nation's warfighters, on schedule and ready to go to war on Day One, as the world's most advanced tanker. I'm pleased to report that Boeing is meeting its commitments."
Since receiving the contract on Feb. 24, 2011, the Boeing KC-46 team has completed several major milestones, including a System Requirements Review, Integrated Baseline Review, 767-2C PDR, and Firm Configuration Reviews for the 767-2C and the KC-46A Tanker.
"I'm very proud of our joint team," said Maureen Dougherty, Boeing KC-46 Tanker vice president and program manager. "We're drawing on the best of Boeing's industry-leading commercial airplane and defense expertise as we design and develop the KC-46A, which is a next-generation derivative aircraft. We remain on plan to deliver the first 18 combat-ready tankers by 2017."
The PDR, which will ensure that Boeing's design meets system requirements, will be followed by a Critical Design Review (CDR) in the third quarter of 2013. The CDR determines that the design of the KC-46A is mature and ready to proceed to the manufacturing phase of the program.
Boeing will build 179 next-generation aerial refueling tanker aircraft that will begin to replace the Air Force's fleet of 416 KC-135 tankers. Based on the proven Boeing 767 commercial airplane, the KC-46A tanker is a widebody, multi-mission aircraft updated with the latest and most advanced technology to meet the demanding mission requirements of the future, including a digital flight deck featuring Boeing 787 Dreamliner electronic displays and a flight control design philosophy that places aircrews in command to maximize combat maneuverability. The KC-46A also features a modernized KC-10 boom with a fly-by-wire control system, and a refueling envelope and fuel offload rate that is greater than the KC-135 it will replace.
A unit of The Boeing Company, Boeing Defense, Space & Security is one of the world's largest defense, space and security businesses specializing in innovative and capabilities-driven customer solutions, and the world's largest and most versatile manufacturer of military aircraft. Headquartered in St. Louis, Boeing Defense, Space & Security is a $32 billion business with 62,000 employees worldwide. Follow us on Twitter: @BoeingDefense.
Boeing ~ Related News;
*Link for This article compiled by Roger Smith from rliable sources Boeing*Speaking Image - Creation of DTN News ~ Defense Technology News *This article is being posted from Toronto, Canada By DTN News ~ Defense-Technology News Contact:dtnnews@ymail.com ©COPYRIGHT (C) DTN NEWS DEFENSE-TECHNOLOGY NEWS
Read more »
Posted by DEFENSE NEWS at 7:30:00 PM No comments: