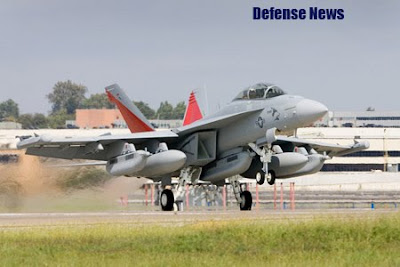 In its daily digest of major defense contracts, the Pentagon said the contract modification said the deal included two sets of 22 EA-18G airborne electronic attack kits and associated engineering work.
The contract runs through December 2012.
Boeing said the Department of Defense approved full-rate production of the new electronic attack plane, also known as the Growler, on Nov. 23, which would help Boeing quickly ramp up production.
It said the decision was a "clear indication" of the Pentagon's support.
The Navy began using its first squadron of EA-18 "Growlers," which are based at Whidbey Island, Washington, as scheduled in September. The warplanes can operate from the deck of an aircraft carrier or from regular airfields.
The new planes are replacing the Navy's EA-6B Prowler, which has been in service since 1971. The Growler joined the Navy's aircraft fleet in 2008.
Boeing is the prime contractor for the new planes, with Northrop Grumman Corp (NOC.N), Raytheon Co (RTN.N) and General Electric (GE.N) as subcontractors. (Reporting by Andrea Shalal-Esa; Editing by Tim Dobbyn) ((andrea.shalal-esa@thomsonreuters.com; + 1 202 354 5807; Reuters Messaging: andrea.shalal-esa.reuters.com@reuters.net))
Posted by DEFENSE NEWS at 7:27:00 AM 1 comment: