Source: DTN News - - This article compiled by Roger Smith from reliable sources The Jerusalem Post
(NSI News Source Info) TORONTO, Canada - April 16, 2011:
Iran on Saturday tested a new anti-aircraft missile system dubbed the Sayyad-2 and the country's defense officials said the system will be deployed throughout the country in the near future, Fars News Agency reported. 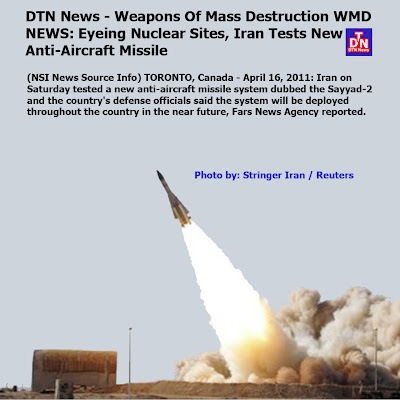 Tehran had previously introduced the Sayyad-1 surface-to-air missile which is capable of destroying targets with a low Radar Cross Section (RCS) at low and medium altitudes, and can also defuse electronic warfare attacks, according to Fars report.

The newest Sayyad-2 is an upgraded version of the system and has "higher precision, range and destruction power," said the report.

Iranian Lietenant Commander Colonel Abolfazi Farmahini said recent tests of the mid-range hawk anti-aircraft missiles, conducted near the Khondab nuclear facility, successfully hit their targets. He said the test was aimed at assessing the level of preparedness of the system in defending Iran's nuclear plants.

Also Saturday, Iranian military officials said the US and Israelare behind the Stuxnet computer worm that has harmed the country's nuclear program, AFP reported quoting IRNA.

"Investigations and studies show that the source of Stuxnet originates from America and the Zionist regime," Gholam Reza Jalali, the commander of the Iranian civil defense organization, said.

Jalali stated that once the worm is mounted on a system, it starts collecting information and then sends reports from the infected machines to specific Internet addresses.

"After following up the reports that were sent, it became clear that the final destinations (of these reports) were the Zionist regime and the American state of Texas," IRNA quoted Jalili as saying.

Jalili was the first Iranian military official to blame the US and Israel for the Stuxnet virus last year.

MISGUIDED MISSILES - BY THE ACORN

Here’s another one for the credulous.

During America’s covert war against the Soviet Union in Afghanistan in the 1980s, the CIA gave 2000 anti-aircraft Stinger missiles to Pakistan’s ISI to be transferred to the Afghan mujahideen. Little is known what became of them — a small number were transferred to the mujahideen, many were supposed to have been destroyed in the (convenient) explosions at Ojhri camp and the Americans may have bought back some of them.

Lt Gen Hamid Gul, former chief of the ISI, has now revealed that although Pakistan did not sell them, as many as thirty five of those missiles ‘reached Iran by mistake’. Even giving him the benefit of the doubt does not make it any better for Pakistan. The advanced military hardware it continues to receive from the United States may reach Iran and other places by the same mistake. Neither is the Stinger episode the first case where American military technology ended up with in the hands of its enemies through Pakistan’s hands. During the Vietnam War, China got more than a good look at the F-104 fighter planes that Pakistan had received by virtue of being America’s Cold War allies.