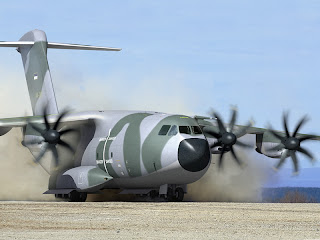 Defense News ~ BERLIN (Reuters) January 29, 2010 - All parties involved in talks on the future of the Airbus A400M military transporter are trying to reach a deal as soon as possible, a spokesman for Germany's defense ministry said on Friday.
Discussions between officials from the seven countries whose governments have ordered the plane and Airbus parents EADS (Paris:EAD.PA - News) were due to continue in Berlin next week, most likely on February 4, another defense ministry spokesman said.
On Thursday, the ministry had said the meeting on Europe's biggest defense project would take place on February 2, but the spokesman said there had been a change in the plans.
Airbus had set buyer nations an end-of-January deadline for a deal on the A400M, but an extension to this has been requested, the ministry said.
Engine problems and delays have pushed plans for a home-grown European troop and armored vehicle transporter 11.2 billion euros over budget, casting a shadow over 10,000 jobs.
(Reporting by Dave Graham and Sabine Siebold; Editing by Dan Lalor)
Posted by DEFENSE NEWS at 9:38:00 AM No comments: 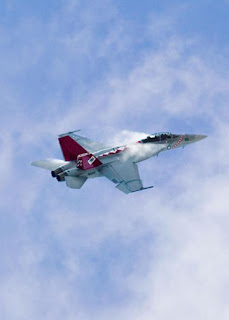 Defense News ~ TUCSON, Ariz., Jan. 29, 2010 /PRNewswire/ -- Raytheon Company (NYSE: RTN) and The Boeing Company (NYSE: BA) completed a series of captive flight tests for the Joint Air-to-Ground Missile competition. The tests prove the system is ready for guided test shots.
"The Raytheon-Boeing JAGM is a mature, capable system. We have proved the technical readiness of this superior warfighting solution," said Bob Francois, vice president of Raytheon Missile Systems' Advanced Missiles and Unmanned Systems product line. "JAGM meets the warfighter's needs and is affordable across the acquisition spectrum including development, operations and support costs."
JAGM will replace three legacy missiles currently in the U.S. Army, Navy and Marine Corps inventory. The Raytheon-Boeing team's JAGM features a Boeing body, a Boeing warhead and a Raytheon tri-mode seeker. The tri-mode seeker leverages technology used on the Raytheon GBU-53/B Small Diameter Bomb II and improved Precision Attack Missile. The tri-mode seeker enables JAGM to attack a variety of fixed and moving targets regardless of weather conditions.
"Boeing is renowned for its proficiency in integrating weapons on platforms like the Super Hornet and AH-64D Apache Longbow," said Carl Avila, Boeing's director of Advanced Weapons and Missile Systems. "When combined with Raytheon's expertise in developing seekers for guided weapons, our JAGM solution is the low-risk solution for operations on rotary- and fixed-wing aircraft and operations at very cold temperatures."
Raytheon Company (NYSE: RTN), with 2009 sales of $25 billion, is a technology and innovation leader specializing in defense, homeland security and other government markets throughout the world. With a history of innovation spanning 88 years, Raytheon provides state-of-the-art electronics, mission systems integration and other capabilities in the areas of sensing; effects; and command, control, communications and intelligence systems, as well as a broad range of mission support services. With headquarters in Waltham, Mass., Raytheon employs 75,000 people worldwide.
A unit of The Boeing Company, Boeing Integrated Defense Systems is one of the world's largest space and defense businesses specializing Integrated Defense Systems is one of the world's largest space and defense businesses specializing in innovative and capabilities-driven customer solutions, and the world's largest and most versatile manufacturer of military aircraft. Headquartered in St. Louis, Boeing Integrated Defense Systems is a $32 billion business with 70,000 employees worldwide.
www.raytheon.com

Defense News ~ REDONDO BEACH, Calif., Jan. 29, 2010 (GLOBE NEWSWIRE) -- The Maritime Laser Demonstration (MLD) system being developed by Northrop Grumman Corporation (NYSE:NOC - News) has passed two milestone reviews by the Office of Naval Research, which point to the real potential of the MLD weapon system design.
Representatives from the U.S. Navy, U.S. Army and the High Energy Laser Joint Technology Office conducted a critical design review and critical safety review of the MLD at the Dahlgren Naval Surface Warfare Center in Dahlgren, Va.
“These reviews indicate that our MLD design should meet the Navy's objectives in future demonstrations," said Steve Hixson, vice president of Advanced Concepts – Space and Directed Energy Systems for Northrop Grumman’s Aerospace Systems sector. “Next we will finalize detailed test plans and move into land-based, live fire tests.”
Northrop Grumman will conduct an at-sea demonstration of this revolutionary capability, according to Dan Wildt, vice president, Directed Energy Systems. “We will prove that the pinpoint accuracy and response capability of our MLD system can protect Navy ships and personnel by keeping threats at a safe distance. We will accomplish this while leveraging technologies with proven scalability that may ultimately enable addressing additional threats of interest to the Navy.”
The company received a contract from the Office of Naval Research in July 2009 to demonstrate an innovative laser weapon system by the end of 2010 suitable for operating in a marine environment and able to defeat small boat threats, and ultimately could be applicable to other self-defense missions. The indefinite-delivery/indefinite-quantity MLD contract has a ceiling value of up to $98 million and an expected overall completion date of June 2014.
Northrop Grumman Corporation is a leading global security company whose 120,000 employees provide innovative systems, products, and solutions in aerospace, electronics, information systems, shipbuilding and technical services to government and commercial customers worldwide.

“Keep the resolution incentive” Twitter contest winner awarded $2000 for spreading awareness
Defense News ~ ARLINGTON, Va.--January 29, 2010, (BUSINESS WIRE)--Homeland Security Capital Corporation ("HOMS") (OTCBB:HOMS - News), an international provider of specialized technology-based radiological, nuclear, environmental, disaster relief, and security solutions to government and commercial customers, announced today the winner of the Twitter New Year’s resolution campaign TWEET4NUCSEC. The online competition raised awareness about the threat of loose nuclear weapons and materials and encouraged efforts to address this threat.
The winner, Amy (twitter.com/abitnerdy), was awarded a $2000 gift card from American Express. The 23-year-old student and freelance fashion designer from Los Angeles plans to give half the money to her parents because she “owes them so much,” and spend the other half on school. Amy also commented, “I am happy to win a unique contest such as this, where the goal was to make the world a safer place.”
The twitter campaign that lasted from January 4 to January 18, asked people to join Chairman and CEO of HOMS, and former Congressman, C. Thomas McMillen’s resolution to increase awareness and the need for action of the threat of loose nuclear weapons by retweeting his resolution to friends, followers and family members and asking them to do the same.
McMillen wrote in his blog: “With the exception of the long-term effects of global warming, no other single threat has more capacity to harm us and perhaps even destroy our world than the threat of loose nuclear material. Around the world today there are large amounts of nuclear and radioactive materials that are inadequately secured—or are not secured at all. These materials, which are often called ‘loose nukes,’ are vulnerable and could too easily fall into the hands of people who want to do us harm—terrorists, organized crime syndicates and hostile nations.”
HOMS’ TWEET4NUCSEC Twitter campaign and contest was a success in increasing awareness about the current threat of loose nuclear materials and increasing exposure on HOMS. There were over 1,500 retweets, putting it into the top 99 percent of all retweets, according to retweetrank.com. The retweets are a meaningful metric for tracking the interest, that the issue of loose nuclear materials has sparked, and hopefully signifies strong interest making our world more secure from the dangers of these nuclear materials.
The campaign was created and implemented by Book Hill Partners, www.bookhillpartners.com.
HOMS’ Twitter campaign is among the first effort by any corporation to use the power of Twitter to address a critical public policy issue. “Lots of companies are using Twitter to advertise their products and services. This is among the first efforts by a company to harness that power for the public good, and perhaps the first ever to focus on a vital national security issue,” McMillen added.
About Homeland Security Capital Corporation
Homeland Security Capital Corporation is a company engaged in the strategic acquisition, development, and consolidation of homeland security-related businesses, within the fragmented homeland security industry. The company is focused on creating long-term value by taking controlling interest and developing its subsidiary companies through superior operations and management. Former Maryland Congressman C. Thomas McMillen, who served three consecutive terms in the U.S. House of Representatives from the 4th Congressional District of Maryland, heads the company.
Homeland Security Capital Corporation’s portfolio of companies include:
Safety and Ecology Corporation (SEC) is a rapidly growing environmental services company in the U.S., providing services nationally, in Europe and the Caribbean. The Company specializes in the removal and remediation of hazardous nuclear materials for the U.S. Department of Energy, U.S. Department of Defense, and other federal agencies. SEC also provides advanced environmental services for private industry across the country and internationally. Since its founding in 1991, SEC has grown approximately 30 percent per year, and has emerged as a technology innovator with more than 450 personnel worldwide and with annual revenues of more than U.S. $70 million. For more information on SEC, visit www.sec-tn.com.
Polimatrix, Inc., a system integrator and total solutions provider delivering advanced radiation and nuclear protection and detection services. The company has been operating since September 2006 as a joint venture between Homeland Security Capital Corporation and Polimaster, Inc. For more information about Polimatrix, visit www.polimatrix.com.
Nexus Technologies Group, a mid-Atlantic security integrator for the corporate and governmental security markets that specializes in non-proprietary integrated security solutions including access control, alarm, video, communication, perimeter protection, and bomb and metal detection security systems. Utilizing cutting-edge technologies, Nexus provides innovative, engineered, and scalable solutions to effectively protect people, property, and assets.
For more information about Nexus, visit www.nexusna.com.
For more information about Homeland Security Capital Corporation, or to be added to our e-mail distribution list, please visit www.hscapcorp.com.
Follow us on Twitter: http://twitter.com/hscapcorp
Forward-Looking Statement
This release includes certain statements that may be deemed to be “forward-looking statements” within the meaning of the Private Securities Litigation Reform Act of 1995. All statements in this release, other than statements of historical facts, that address future activities, performance, events or developments, are forward-looking statements. Although Homeland Security Capital Corporation believes the expectations expressed in such forward-looking statements are based on reasonable assumptions, such statements are not guarantees of future performance, and actual results or developments may differ materially from those in the forward-looking statements.
Contact:
Homeland Security Capital Corporation
Anne Smith, 865-342-7668
asmith@sec-tn.com
Posted by DEFENSE NEWS at 9:04:00 AM No comments: