Source: DTN News - - This article compiled by Roger Smith from reliable sources By Samia Nakhoul and Khaled Abdullah, Reuters + Montreal Gazette
(NSI News Source Info) SANAA/TAIZ, Yemen - May 30, 2011: The Yemeni air force bombed an al-Qaida-held southern city on Monday while residents in another city said soldiers had opened fire on a demonstration and run protesters over with bulldozers, killing at least 15. 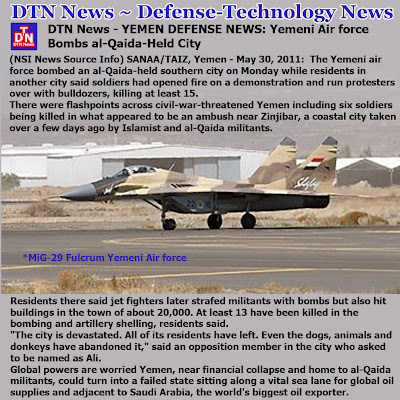 There were flashpoints across civil-war-threatened Yemen including six soldiers being killed in what appeared to be an ambush near Zinjibar, a coastal city taken over a few days ago by Islamist and al-Qaida militants.
Residents there said jet fighters later strafed militants with bombs but also hit buildings in the town of about 20,000. At least 13 have been killed in the bombing and artillery shelling, residents said.
"The city is devastated. All of its residents have left. Even the dogs, animals and donkeys have abandoned it," said an opposition member in the city who asked to be named as Ali.
Global powers are worried Yemen, near financial collapse and home to al-Qaida militants, could turn into a failed state sitting along a vital sea lane for global oil supplies and adjacent to Saudi Arabia, the world's biggest oil exporter.
Opposition leaders have accused Saleh of allowing the city of Zinjibar, on the Gulf of Aden, to fall to al-Qaida and Islamist militants in order to raise alarm in the region that would in turn translate into support for the president.
Fears are growing that Yemen-based al-Qaida in the Arabian Peninsula (AQAP) will exploit such instability, analysts said. The United States and Saudi Arabia, both targets of attacks by AQAP, are worried that growing chaos is emboldening the group.
The six soldiers were killed and dozens wounded as they were travelling to Zinjibar, a security official and others said.
"Civilians found a military car and an armoured vehicle. They were destroyed, and the bodies of six soldiers were found on the roadside," Ayman Mohamed Nasser, editor-in-chief of Attariq, Aden's main opposition paper, said by telephone.
Several hundred al-Qaida and Islamist militants took over the city a few days ago and have been battling locals and government soldiers for control.
Zinjibar residents told Reuters that power and water had been cut off and many civilians were fleeing to nearby towns.
TROUBLE IN TAIZ
A brief calm was shattered on Sunday when forces loyal to President Ali Abdullah Saleh opened fire on protesters in Taiz, killing at least 15 people and wounding hundreds, hospital sources said, adding the death toll was almost certain to rise.
"Most of the wounded were hit by live bullets, but some were run over by bulldozers," a medical source said from a field hospital.
Fresh protests are planned on Monday in Taiz, where Saleh's troops have burned tents used by demonstrators and parked armoured vehicles in a protest area known as "Freedom Square".
Security forces arrested dozens on Monday, trying to head off the rally demanding an end to Saleh's nearly 33-year rule.
In Taiz, police on Sunday night fired live ammunition and tear gas to disperse demonstrators outside a municipal building demanding the release of a fellow protester who was arrested on Saturday.
In the capital Sanaa, about 200 kms (120 miles) north, several explosions were heard on Sunday night in the district of Hasaba, the scene of week-long fighting between Saleh's forces and a rival tribe in which 115 people were killed.
There were no immediate details of the explosions, which may have breached a truce between Saleh's forces and the powerful Hashed tribe led by Sadeq al-Ahmar to stop the bloodiest fighting since unrest erupted in January.
Tribal leader Ahmar condemned what he described as "Saleh's new massacre" of civilians in Taiz. Mobile phone operator Sabafon, whose main owner the Al-Ahmar Group is linked to the tribal clan fighting the president, said separately in a statement it was holding authorities responsible for a cut off of its international mobile, landline and Internet services, Yemeni news websites reported.
FRENCH KIDNAPPING
French officials said on Monday it was credible that three aid workers who disappeared in Yemen at the weekend had been kidnapped, although it had still not received any claim of responsibility.
In Yemen, a security official told Reuters a vehicle used by the French aid workers had been found in a remote area outside the town of Saywun, near where they disappeared.
About 300 Yemenis have been killed over the past months in demonstrations demanding an end to Saleh's nearly 33-year reign, by protesters inspired by the "Arab Spring" movement which toppled the long-standing rulers of Tunisia and Egypt.
Despite demands by global and regional powers that he step down, Saleh has refused to sign a deal, mediated by Gulf states, to start a transition of power aimed at averting civil war that could shake the region that supplies much of the world's oil.
Yemen is the poorest state on the oil-rich Arabian Peninsula with about 40 per cent of its 23 million people living on less than $2 a day.

More on This Story

Source: DTN News - - This article compiled by Roger Smith from reliable sources By Annika Breidthardt - Reuters
(NSI News Source Info) BERLIN, Germany - May 30, 2011: Chancellor Angela Merkel's ruling coalition declared on Monday it would shut all nuclear reactors by 2022, in a policy u-turn drawn up in a rush after the Fukushima disaster in Japan. 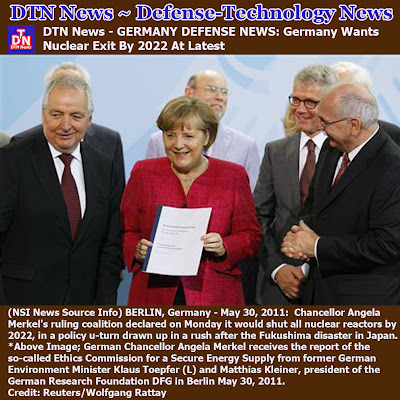 The coalition, sensitive to accusations it may increase dependence on highly polluting brown coal, said it planned to cut power use by 10 percent by 2020. But Merkel may be hard pressed to present the plan as anything but a political defeat at the hands of Social Democrat and resurgent Green rivals.
The proposal may be even more ambitious than the nuclear exit planned when the Social Democrats (SPD) and Greens were in power in 2000. It takes eight of 17 nuclear plants offline now and six by 2021.
But it could still face opposition from utilities.
Only nine months ago Merkel announced an extension of the lifespan of unpopular nuclear plants by an average 12 years. In March, after Japan's earthquake and tsunami, she reversed that and put Germany's entire energy strategy under urgent review.
"Our energy system has to be fundamentally changed and can be fundamentally changed. We want the electricity of the future to be safer and, at the same time, reliable and economical," Merkel told reporters on Monday.
To accompany the nuclear exit, Germany plans to cut electricity usage by 10 percent by 2020 and double the share of renewable energy sources to 35 percent over the same period, according to a government paper seen by Reuters.
Merkel did not outline further details of the plan but the government paper said Germany's goal of reducing greenhouse gas emissions by 40 percent by 2020 remained in place.
Most voters in Germany oppose atomic energy, which provided 23 percent of overall power before the seven oldest stations were shut down in March.
A disputed 2.3 billion euro a year tax on spent fuel rods will not be scrapped even as the coalition plans to go ahead with the shutdown, Environment Minister Norbert Roettgen said early on Monday after late-night talks in the chancellor's office between leaders of the center-right coalition.
"(It's) definite: the latest end for the last three nuclear power plants is 2022," Roettgen said after the meeting and before leaving on his bicycle.
Merkel's about-turn has done little to gain her support, but has drawn scorn from the opposition and within her own party ranks. Tens of thousands of people demonstrated against nuclear energy at the weekend all across Germany.
Nuclear policy is heavily disputed in Germany and the issue has helped boost the Greens, which won control of one of the CDU's stronghold states, Baden-Wuerttemberg, in a March vote.
Merkel's majority in the Bundesrat upper house, where the states are represented, vanished last year after the CDU failed to hold onto the populous North Rhine-Westphalia state. Losing Baden-Wuerttemberg, a vote held in the shadow of the Fukushima nuclear crisis, dealt another blow to Merkel's authority.
Germany's largest power provider RWE, which had suggested ending nuclear power in 2025, signaled its opposition to the deal. A spokesman for the company said the firm would keep "all legal options open."
"The end (of nuclear power in Germany) by 2022 is not the date we had hoped for," the spokesman said, declining to comment on the effect of the decision on the company's earnings.
The decision could still face opposition from RWE's peers E.ON, Vattenfall and EnBW, the other three utility companies that run the 17 plants.
German baseload power in the wholesale market on Monday rose 70 cents from Friday to 60.20 euros a megawatt hour.
"Prices must go up to account for permanently lower capacity. Neighboring Europe will have to price in the potential absence of German power in case of unfavorable supply situations," one trader said.
Shares in utilities E.ON and RWE fell 2.2 and 2.4 percent respectively at the open.
NO WAY BACK
Some politicians had wanted a clause allowing for revision of the agreement in future. The Free Democrats, junior partners in Merkel's center-right coalition, wanted no firm date but a flexible window for exit, plus the option of bringing back at least one of the seven oldest nuclear reactors in an emergency.
"There will be no clause for revision," Roettgen said.
The coalition agreed to keep one of the older reactors as a "cold reserve" for 2013, if the transition to renewable energies cannot meet winter demand and if fossil fuels do not suffice to make up for a potential shortfall.
A massive earthquake and tsunami in March crippled Japan's Fukushima plant, causing releases of radioactivity, sparking calls for tougher global safety measures and prompting some governments to reconsider their nuclear energy strategy.
The German decision still needs to go through parliament and leaders of the opposition Social Democrats and the Greens were present at parts of the meeting to enable a broad consensus.
The coalition wants to keep a nuclear tax, which was expected to raise 2.3 billion euros ($3.29 billion) a year from this year, but so far has not been levied. With the immediate exit of eight plants it will raise less than envisaged.
It had mulled dropping the tax in return for the utilities supporting and not suing the government over an early exit.
(Reporting by Annika Breidthardt, Andreas Rinke and Hans-Edzard Busemann; additional reporting by Vera Eckert, Peter Dinkloh, Josie Cox and Jonathan Gould in Frankfurt, editing by Mark Trevelyan)