Boeing gets $750 mln US Air Force B-52 bomber contract 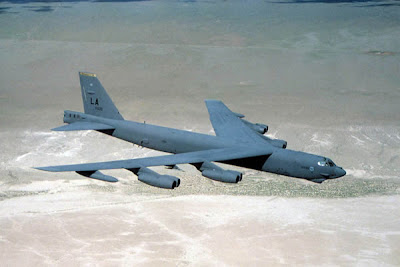 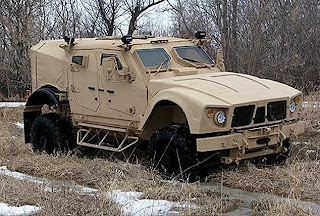 OSHKOSH, Wis.-- December 24, 2009,(BUSINESS WIRE)--Oshkosh Defense, a division of Oshkosh Corporation (NYSE:OSK - News), has received an order valued at more than $54 million from the U.S. Army Tank-automotive and Armaments Command Life Cycle Management Command (TACOM LCMC) to supply more than 970 add-on protection kits for the MRAP All-Terrain Vehicle (M-ATV).
Under the delivery order, Oshkosh will supply more than 170 explosively formed penetrator (EFP) kits through April 2010 and 800 rocket-propelled grenade (RPG) kits through May 2010. To date, Oshkosh has received awards valued at $3.52 billion to deliver 6,619 M-ATVs, as well as spare kits and aftermarket in-theater support.
“The M-ATV provides exceptional protection capabilities for our U.S. Armed Forces in Afghanistan, and these add-on armor kits will only further improve upon those capabilities,” said Andy Hove, Oshkosh Corporation executive vice president and president, Defense. “A flexible design and advanced independent suspension system allows the vehicle to take on additional payloads, including add-on armor upgrades.”
Oshkosh Defense teamed with Plasan North America to provide an advanced armor solution for the M-ATV. Plasan also developed the armor system used on more than 5,000 legacy MRAPs and thousands of Oshkosh Medium Tactical Vehicle Replacement (MTVR) Armored Cabs already in theater.
The M-ATV uses the Oshkosh-patented TAK-4® independent suspension system to provide superior off-road mobility as well as support vehicle upgrades, such as heavier armor. The system, which has undergone more than 500,000 miles of government testing, provides 16 inches of independent wheel travel and helps the vehicle achieve a 70-percent off-road profile capability to negotiate harsh cross-country terrain and unimproved roads.
Existing Oshkosh facilities have the capacity, highly skilled workforce and proven manufacturing capability to deliver the M-ATV and vehicles for all other Army and Defense programs, including the Family of Medium Tactical Vehicles (FMTV), as well as any surges in production.
About Oshkosh Defense
Oshkosh Defense, a division of Oshkosh Corporation, is an industry-leading global designer and manufacturer of tactical military trucks and armored wheeled vehicles, delivering a full product line of conventional and hybrid vehicles, advanced armor options, proprietary suspensions and vehicles with payloads that can exceed 70 tons. Oshkosh Defense provides a global service and supply network including full life-cycle support and remanufacturing, and its vehicles are recognized the world over for superior performance, reliability and protection. For more information, visit www.oshkoshdefense.com.
About Oshkosh Corporation
Oshkosh Corporation is a leading designer, manufacturer and marketer of a broad range of specialty access equipment, commercial, fire & emergency and military vehicles and vehicle bodies. Oshkosh Corp. manufactures, distributes and services products under the brands of Oshkosh®, JLG®, Pierce®, McNeilus®, Medtec®, Jerr-Dan®, Oshkosh Specialty Vehicles, Frontline™, SMIT™, CON-E-CO®, London® and IMT®. Oshkosh products are valued worldwide in businesses where high quality, superior performance, rugged reliability and long-term value are paramount. For more information, log on to www.oshkoshcorporation.com.
®, ™ All brand names referred to in this news release are trademarks of Oshkosh Corporation or its subsidiary companies.
Forward-Looking Statements
This press release contains statements that the Company believes to be “forward-looking statements” within the meaning of the Private Securities Litigation Reform Act of 1995. All statements other than statements of historical fact, including, without limitation, statements regarding the Company’s future financial position, business strategy, targets, projected sales, costs, earnings, capital expenditures, debt levels and cash flows, and plans and objectives of management for future operations, are forward-looking statements. When used in this press release, words such as “may,” “will,” “expect,” “intend,” “estimate,” “anticipate,” “believe,” “should,” “project” or “plan” or the negative thereof or variations thereon or similar terminology are generally intended to identify forward-looking statements. These forward-looking statements are not guarantees of future performance and are subject to risks, uncertainties, assumptions and other factors, some of which are beyond the Company’s control, which could cause actual results to differ materially from those expressed or implied by such forward-looking statements. These factors include risks related to the required increase in the rate of production for the M-ATV contract and the amount, if any, of additional orders for M-ATVs that the Company may receive; the cyclical nature of the Company’s access equipment, commercial and fire & emergency markets, especially during a global recession and credit crisis; the duration of the global recession, which could lead to additional impairment charges related to many of the Company’s intangible assets; the expected level and timing of U.S. Department of Defense procurement of products and services and funding thereof, including the outcome of the formal protests of the Family of Medium Tactical Vehicles (FMTV) award to the Company; risks related to reductions in government expenditures and the uncertainty of government contracts; the consequences of financial leverage associated with the JLG acquisition, which could limit the Company’s ability to pursue various opportunities; risks related to the collectability of receivables during a recession, particularly for those businesses with exposure to construction markets; risks related to production delays as a result of the economy’s impact on the Company’s suppliers; the potential for commodity costs to rise sharply, including in a future economic recovery; risks associated with international operations and sales, including foreign currency fluctuations; and the potential for increased costs relating to compliance with changes in laws and regulations. Additional information concerning these and other factors is contained in the Company’s filings with the Securities and Exchange Commission. All forward-looking statements speak only as of the date of this press release. The Company assumes no obligation, and disclaims any obligation, to update information contained in this press release.
Contact:
Oshkosh Corporation
Financial: Patrick Davidson
Vice President, Investor Relations
920.966.5939or
Media: Ann Stawski
Vice President, Marketing Communications
920.966.5959
Posted by DEFENSE NEWS at 12:16:00 PM 1 comment:

Former Northrop Grumman subsidiary has supported FAA for over 20 years
CHANTILLY, Va., Dec. 24 /PRNewswire/ -- TASC Inc. is part of a team that has been awarded the Aviation Weather Office contract by the Federal Aviation Administration, improving detection, forecasting, integration, and dissemination of weather information to reduce the impact of weather on Next Generation Air Transportation System operations.
TASC is a subcontractor to Basic to Commerce and Industry, Inc. (BCI) on this award. The company's portion of the contract has a total potential value of $5 million over a five year period.
"We have a well-established working relationship with the FAA and have been successfully providing it support over 20 years," said Pamela Drew, vice president of enterprise systems for TASC Inc. "This win capitalizes on the company's experience supporting sustainment and modernization weather programs."
Under the contract, TASC will provide technical and acquisition services to support program management, systems engineering, performance management, and implementation of the Air Traffic Organization (ATO)-Planning weather programs.
The FAA Weather Office Contractor Support Team, lead by BCI, Moorestown, N.J., consists of TASC Inc., ITT Industries, Inc., White Plains, N.Y.; Data Transformation Corporation (DTC), Silver Spring, Md.; and Engility, Billerica, Mass. Work on the contract will take place primarily in Washington, D.C. and the William J. Hughes Technical Center in Atlantic City, N.J.
About TASC
TASC is a premier provider of advanced systems engineering and advisory services across the Intelligence community, Department of Defense and civilian agencies of the federal government. For more than 40 years, we have partnered with our customers toward one goal—the success of their missions. TASC's broad portfolio of services includes cyber security; advanced concept and technology development; enterprise engineering and integration; program, financial and acquisition management; system/policy studies and analysis; test and evaluation; and program protection engineering. For more information, visit our website at www.tasc.com .
CONTACT
DeeAnn Connors
(703) 653-5752
DeeAnn.Connors@TASC.com
Posted by DEFENSE NEWS at 12:11:00 PM 1 comment: 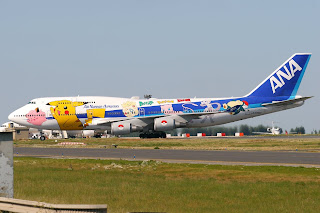 TOKYO and HOUSTON, TX and CHICAGO, IL--December 24, 2009, (Marketwire - 12/24/09) - All Nippon Airways, Continental Airlines (NYSE:CAL - News), and United Airlines (NASDAQ:UAUA - News) today filed an application with the U.S. Department of Transportation for antitrust immunity to enable the three carriers to create a more efficient and comprehensive trans-Pacific network, generating substantial service and pricing benefits for consumers.
The trans-Pacific joint venture -- the first of its kind between the U.S. and Asia -- also would enable ANA, Continental, and United to compete more effectively with other global alliances, each of which has a significant presence in Tokyo.
Upon DOT approval of the companies' immunity application, ANA, Continental, and United will be able to jointly manage trans-Pacific activities including scheduling, pricing and sales, offering customers a greater selection of routings and a wider range of fare and service options.
"By making this closer cooperation between our partner airlines, we will be able to strengthen our trans-Pacific network and improve our services," said Shinichiro Ito, President and CEO of ANA. "We are looking forward for our application to be approved, which will create greater convenience for our valued customers," he added.
"Our network of service to nine Japanese cities will be enhanced by giving our customers more options for using our flights in conjunction with United and ANA for trips both within the region as well as on trans-Pacific routes," said Larry Kellner, Continental's chairman and chief executive officer.
"This joint venture, coupled with the recently announced open skies agreement between the U.S. and Japan, will significantly enhance our ability to serve customers in Japan and throughout Asia and offer new choice and convenience for customers," said Glenn Tilton, United's chairman and chief executive officer.
The Department of Transportation granted antitrust immunity to United and Continental in July 2009, enabling the two carriers to coordinate schedules and fares for services outside the United States.
To view the full text of this press release go to http://www.ana.co.jp/ir/
Contact:
ANA Public Relations
+81-(0)3-6735-1111
Posted by DEFENSE NEWS at 12:04:00 PM No comments: