Source: DTN News - - This article compiled by Roger Smith from reliable sources Telegraph UK
(NSI News Source Info) TORONTO, Canada - December 5, 2011: So when he awoke on Monday morning and saw that support for his United Russia party appeared to have fallen to just under fifty per cent from a stellar 64 per cent of the vote four years ago it must have left a bitter taste in his mouth.
In a de facto one party state where the ruling elite controls all the levers of power embarrassing setbacks like this are not supposed to happen. 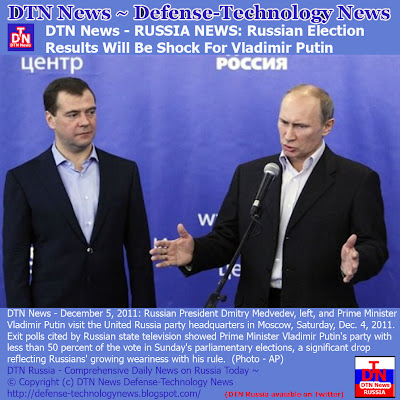 Nor, it appears, did Mr Putin's party even win all of its votes fairly. The country's only independent election watchdog uncovered thousands of breaches of electoral law and was itself targeted by the authorities to make its life more difficult.
Mr Putin's Soviet-style party easily won Sunday's parliamentary election anyway. Its closest rival, the Communists, look to have garnered around only twenty per cent of the vote. But the precipitous drop in United Russia's popularity ahead of Mr Putin's own planned return to the Russian presidency next May will have the Kremlin worried.
Sunday's vote was the first chance ordinary Russians had been given to pronounce on his decision to return to the Kremlin next year for a third time. It was hardly the ringing endorsement he had hoped for.
One reason for that is indisputably that some Russian voters are beginning to grow tired of the Putin show and to resent the fact that they are not being offered any alternative.
The former KGB spy's personal popularity ratings are still above fifty per cent but they have been gradually falling.
The manner in which he and the Kremlin have stage-managed political life in the last year has not helped.
Many Russians felt that Mr Putin, who was president from 2000 to 2008, was the right 'muzhik' or real man to "put Russia back on its knees" after the anarchic 1990s.
He was credited with saving the motherland from chaos, restoring order, and then presiding over an unprecedented oil-fuelled decade-long rise in living standards.
But times are different. Many Russians outside Moscow and St. Petersburg remain mired in poverty and are growing impatient, while parts of the urban middle class that have enjoyed buying foreign cars and wide screen TVs in recent years are now looking for qualitative changes in other areas of their life such as politics. The problem though is that there is no sign that change is on the way anytime soon.
A slew of corruption scandals which have engulfed the United Russia party have added insult to injury.
As ordinary Russians living far from Moscow have been forced to tighten their belts, they have watched in disgust as party officials have ostentatiously enriched themselves at the state's expense while doing nothing to improve ordinary voters' lives.
For a while, the plot looked like it could have a different ending.
When Mr Putin stepped down from the presidency in 2008 in line with the constitution and handed over the Kremlin keys to his hand-picked successor Dmitry Medvedev even his opponents had to admit that he was at least going through the motions of playing by the rules.
But when he announced that he would be swapping jobs with Mr Medvedev and running for president again in March he appeared to confirm all his critics' worst fears.
Mr Medvedev, it turned out, had been his master's voice all along, and Mr Putin's thirst for power was unabated.
Under constitutional changes his own party pushed through, presidential terms were extended from four to six years and Mr Putin is entitled to serve two back-to-back terms meaning he could stay in the Kremlin until 2024 at which point he would be 71. He has not shown any signs that he is willing to allow serious political reform. Stability is the watchword, he has said, and that means only very gradual change.
His political opponents remain banned from state TV, harassed, and have their numerous attempts at protest meetings violently dispersed by the ever loyal riot police. Meanwhile, three of the four political parties allowed to sit in parliament are pro-Kremlin to one degree or another and the fourth party, the Communist party, appears to have given up providing any proper opposition years ago.
Mr Putin's party may have won Sunday's election but he and his allies have been sent a message. His presidential ambitions remain intact but if he is to keep the Putin show on the road he is going to have to do something different. At the very least that means cleaning up his corruption-riddled party and allowing something that does not come naturally to a former spy: a degree of real political competition.
*Link for This article compiled by Roger Smith from reliable sources Telegraph UK
*Speaking Image - Creation of DTN News ~ Defense Technology News
*This article is being posted from Toronto, Canada By DTN News ~ Defense-Technology News
Contact:
dtnnews@ymail.com