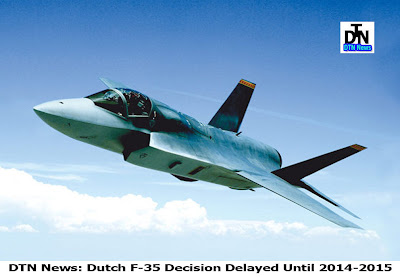 number of JSF fighter jets in the next cabinet period, the Volkskrant reports on Friday, quoting sources in The Hague.
The sources say Rutte is in favour of buying a second test aircraft in order to guarantee the participation of Dutch firms in the development and production process. Rutte made the comments during talks on forming a coalition with the Labour party, which failed last month, the paper says.
The current caretaker government delayed taking a decision on the purchase of dozens of JSF aircraft until 2012 because of opposition from Labour, which was part of the coalition.
The paper says Rutte is well aware that ordering JSF aircraft at a cost of €6bn would be very sensitive at a time of cuts in education, healthcare and social security spending. He is committed to finding austerity measures to generate €18bn in savings between now and 2015.
The PVV is also opposed to spending money on the JSF and the CDA is only committed to buying a second test aircraft. The VVD hopes to form a new government with the CDA and PVV.
Rutte, “No JSF “
AMSTERDAM – The purchase of the Joint Strike Fighter (JSF) will be delayed because VVD leader Mark Rutte will not take a decision during the next Cabinet period about the purchase.
He said that he knows that such a major issue during a period of significant cuts in health care, education and social security is sensitive in society. According sources from The Hague reported by the Volkskrant he only intends to buy the second test aircraft so that Dutch companies can participate in the development and manufacture of American fighter.
The purchase of the JSF is budgetted at about 6 billion euro. That is one third of the amount € 18 billion) that the (probably) new government-Rutte is planning to cut Of the major parties, the CDA is still an outspoken advocate of the JSF.
Posted by DEFENSE NEWS at 6:24:00 AM